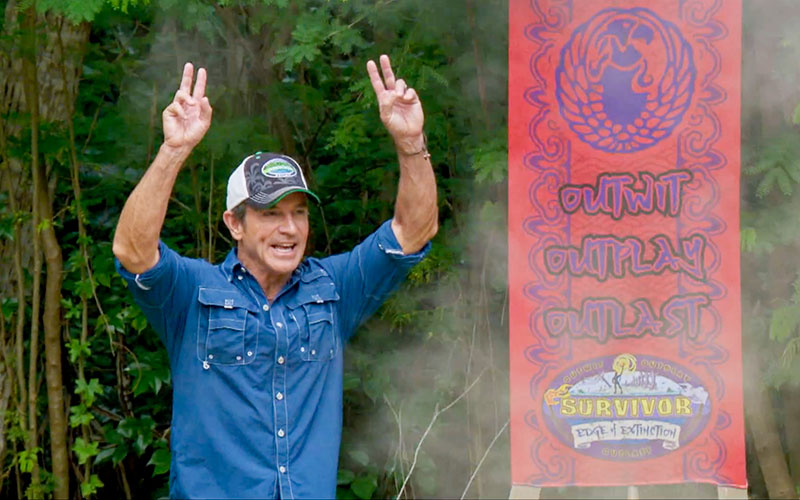 Jeff Probst during Survivor: Edge of Extinction episode 10, which had two and two: two Tribal Councils, two votes. (Image from Survivor via CBS)

Survivor: Edge of Extinction‘s double eviction episode quickly moved through two immunity challenges and two votes, and ended up sending both of the remaining returnees to the jury and Extinction.

Yes, David Wright and Kelley Wentworth’s time on Survivor ended—never mind. They’re still there, like everyone else, now just waiting for another chance to re-enter the game.

Episode 10 started with some aftermath of last week’s insane Tribal Council—no time for a recap or opening credits—and then we jumped to an immunity challenge.

So many of the individual immunity challenges this season have basically been a version of this: balance awkwardly and uncomfortably and hold a thing. I’d prefer that to just feats of pure physical strength, but what happened to variety? The quizzes, or memory, or the run-around-and-gather-things challenges? Why drain the creative life out of the challenge portion of Survivor?

Aurora won the first immunity, balancing and holding her pole the longest. The challenge did have some nice set design, with an urn falling onto hot coals.

It also had a “mountain of pizza,” which I am seriously gagging just thinking about, and Victoria, Kelley, Ron, and Lauren opted to eat from instead of competing.

Also, this is a mountain of pizza:

The second immunity challenge provided the first real variety, even though it was a repeat challenge.

It was set on a really spectacular platform built high above the ocean, and had the contestant balancing balls on paddles. Rick Devens started by announcing that he’d received an advantage.

On Extinction Island—in a scene that felt rushed because of course it did, there’s not enough time to keep paying attention to everyone—David found an advantage that he had to send to someone in the game. (The cast is now operating with the assumption that advantages are no longer hidden at their camp, but on Extinction.)

The advantage basically gave Devens immunity: He only had to land four balls instead of five, a massive advantage in a challenge that involved balancing five balls at once.

The advantage also gave Jeff Probst the chance to say, “Devens, toss me one of your balls,” which I cannot believe he said without breaking into laughter.

Each of the two votes was preceded by conversations that set up two different options.

First, an alliance six—led by Wardog, Kelley, and Lauren, with Gavin and the addition of Ron and Julie, decided to target David, since they were unable to just vote out Aurora, who I thought was history the second she started talking about being in foster care and used to not having any friends.

Instead, they decided to target David. David wanted to target the “power trio” of Lauren/Kelley/Wardog.

The swing votes, according to the edit, were Ron and Julie, who could have partnered with David, Devens, Aurora, and Victoria. But they ultimately didn’t.

Still, David’s argument to Julie was compelling: He framed their conversation as the one conversation she’d regret later, because all Survivor losers have decision they regret.

I wasn’t quite sure we needed David Wright back this season (I mean, beyond the question of whether we needed returnees, which we did not), but he’s more than proven why he’s a good returnee: He makes great television and terrific speeches.

Both he and Devens excel at Tribal Council answers: David with his metaphors, Devens with his speeches. Though it’s clear that not only did those speeches not really have much of an impact, but that David’s rhetoric isn’t perfect: Everyone laughed at him when he said, “my brand is loyalty.”

But Wardog doesn’t take the easy route, and that’s why he’s interesting to watch, even if listening to him often makes me want to stuff my ears full of a mountain of pizza.

He did make the compelling case—and one I very much appreciated—that returnees frequently march to the end and win because “we’re all super-fans,” as he told Ron. “We can’t let that happen.” (Tangent: Ron’s sociopath edit continues; Aurora tried to buy favor by giving him her extra vote, and he cackled about using it to vote her out.)

I’m surprised it took this long to vote out the final two returnees; I’m surprised Kelley Wentworth didn’t even see it coming, that’s how comfortable she was.

Now we’re left with eight players that includes a bunch of people the editing has had very little time to focus on, plus everyone else hanging out on an island.

The kind of votes we saw tonight might have been felt more had they happened on a season that, you know, sent people to Ponderosa and the jury, but that is not Survivor: Edge of Extinction.