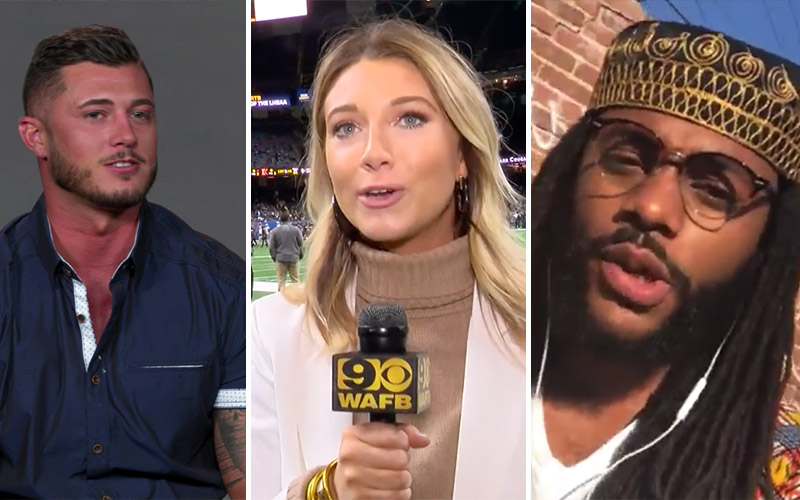 Three of the seven Real World Atlanta cast members: Clint Wright (from his Facebook Watch casting video), Meagan Melancon (in a clip reel she uploaded to YouTube), and Justin Blu (in an Instagram video he posted recently).

The seven cast members who will reboot The Real World franchise when it premieres on Facebook sometime soon have been identified, thanks to the fact that they’re filming in Atlanta and in public spaces such as this restaurant.

They are older than typical Real World casts, though most are in their mid-to-late 20s (the show cast for people ages 21 to 34). But they all seem to have jobs and passions, hallelujah, so they’re not just skipping college to go directly to fame on MTV.

Among the cast members are a young mother who is also a DREAMer; a TV news sports reporter; and a farmer from Michigan.

A full list is below, but here’s what another cast member wrote about herself for her bio on her modeling agency’s site. If you’re already judging her for being a model who’s going on reality TV, just keep reading:

“My name is Yasmin Almokhamad , I am a visual artist focused on contemporary works. I am Syrian / Armenian , born in Russia an Immigrated to America as a child. I was sober for the last three years , and definitely want to advocate for all people but especially women how life changing sobriety can be. I also think it is very important for young women to have powerful role models to look up too that are real people and NOT glamorized by false realities. Acceptance of myself, from my body size ,queerness to my weird ness has not been easy; especially coming from my cultural background but that is where my powerful story lies. I have been focusing on digital works lately & clothing that respresent [sic] my culture in collaboration with pop culture that send a message to people across the board.”

Bravo to Facebook’s version of The Real World for casting people with such depth and complexity; now, let’s hope they’re actually able to capture that and present it well in episodic television.

The show started filming in mid March, and continues through the end of May; a premiere date has still not yet been announced.

The new season will only be on Facebook, and it’s yet to be seen if people will even find the show there, never mind watch.

Facebook’s general strategy for its video platform keeps changing—A Facebook Watch creator with more than 500,000 followers recently called the video platform “a hard environment to thrive in”—never mind the company’s massive problems, including and the way it’s contributing to the downfall of civilization. (I exaggerate only slightly.)

But this cast makes me hopeful for this season, and it’s too bad they won’t be on actual MTV.

The seven Real World Atlanta strangers and their true stories

Before the cast was locked down, and before the show started filming, I talked to someone involved in the casting process, who told me they were asked to find people with “a story, a journey, something where they’re in the middle of a plot point in their life.”

As is typical with reality TV casting, the casting team reached out to encourage people to apply; the person involved estimated that 80 percent applied themselves, while 20 percent were recruited.

The seven strangers who were eventually chosen were later identified by reliable spoiler PinkRose on Vevmo, a discussion forum with an emphasis on MTV shows.

The links below go to PinkRose’s threads on each cast member, which start with photos and even video footage of the cast members being filmed for the show.

The cast members are:

Arely Avitua, 21, a mother who is also a DREAMer, meaning she was an undocumented immigrant who came to the U.S. as a minor and was protected from deportation by DACA.

Clint Wright, 28, a welder and farmer from Michigan who was apparently voted onto the cast by Facebook users.

Dondre Randolph, 25, whose Instagram identifies him as a “University of Houston Alumnus” and “Engineer.”

Justin Blu, who produces videos for Instagram that he describes as “Education & Life Lessons From A Black Perspective.” He already lived in Atlanta, and has continued to post videos to Justin Blu University in March and April.

Tovah Marx, 27, a social worker who works with foster children.

Yasmine Almokhamad, 27, an artist who is also a “curve model,” according to her Instagram bio. (Her full bio is above.)