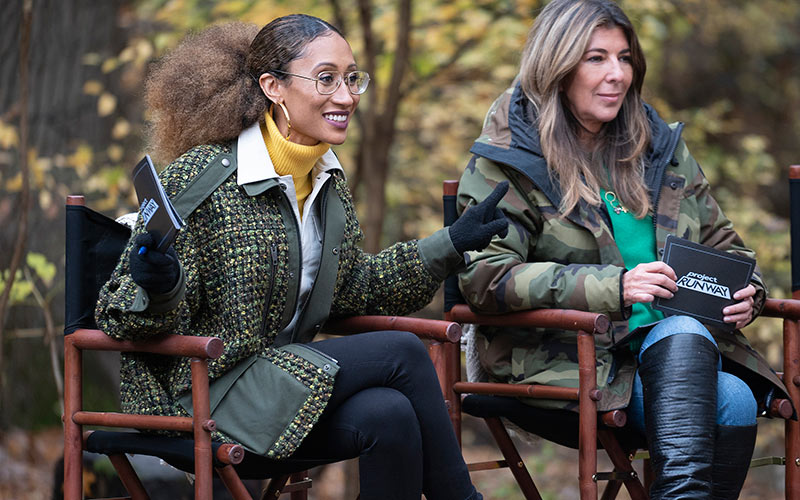 The first episode of Project Runway’s triumphant return to Bravo was familiar, not radically different from the one that aired on Lifetime. Yes, its host, mentor, and all but one judge had changed, and so had the sets, but the basic core of the show seemed intact.

As this season has progressed, it’s continued to deliver on its fundamental promise as a talent competition, yet has also revealed itself to be much more than that premiere suggested it was. Project Runway is exceptional reality television once again.

The transition from Lifetime’s version to the new Bravo Project Runway is the difference between an artificial Christmas tree and one freshly cut tree from a lot in New England, bursting with fragrance; it’s cleaning off your glasses or sunglasses and realizing just how foggy they were; it’s eating popcorn popped in a cast iron skillet with oil and butter after years of tolerating bags of chalky kernels from microwavable bags.

The differences are in every frame—and even in the music, which has brought back many of the original musical cues.

I watched Project Runway on Lifetime and enjoyed many of its episodes, but I was only super-passionate about Project Runway Junior. I now think that’s because it had some of the life and verve that Lifetime drained out of the original.

Lifetime and Bunim-Murray, who produced the show during its time there, aren’t entirely to blame. It’s worth remembering that, in its fifth and final Bravo season, Project Runway was simply not good; it even seemed to me like Bravo was attempting to sabotage it, or at the very least, wasn’t doing anything to help.

Project Runway leapt into the cultural conversation over the holidays in 2004, thanks to repeats of its early episodes, going from ratings flop to phenomenon in a matter of weeks.

But it burned brightly and faded fast, especially once it switched networks. The first two Lifetime seasons were dreadful. It eventually perked up, and offered creativity like the rainway challenge, but those seasons didn’t approach the ebullience that I’m now seeing on screen—and experiencing as a viewer.

For its fourth episode, Project Runway 17 left its brand-new sets behind and reconstructed everything in the middle of the woods: a runway, hair and makeup tents, and of course, the work room. The contestants slept in tents and ate food wrapped in foil, and the models walked the runway in freezing rain, and the judges stood up to wrap the models in blankets while they critiqued the designers’ work.

That wasn’t just an unconventional materials challenge, it was an unconventional challenge and episode, and one that leapt from the screen and declared that this is what we’d been missing: wild creativity from the designers and from Project Runway itself.

The other challenges have been dramatically different from each other, from designing around wearable art to a challenge that asked designers to create a video game character—one that was both realized by an artist and who came to life on the runway.

The designers themselves are a model of what diversity and inclusion should look like on reality TV: The production hasn’t simply checked a box and moved on, but has found people with a wide range of backgrounds and life experiences, plus varied skills and ideas about fashion.

Not all of them are succeeding at the demands of Project Runway, but they are certainly a joy to watch: I desperately miss eliminated designers Kovid Kapoor and Afa Ah Loo, who were buoyant even in defeat.

There have been a few minor squabbles, but Project Runway is back to finding its drama in the creative process, not in people fighting among themselves. The one team challenge we’ve seen so far still had each designer making their own garment, so it allowed them to still execute their own vision.

The only major issue with this season is that some of the models are being treated as a problem or an obstacle to overcome, both by some of the designers and by the editing. Hazel Cills discussed that in an essay for Jezebel, writing that “the problems Project Runway designers have when it comes to designing for a wide range of bodies is a testament to how small sizes are still expected to be the norm, not just on the runway at Paris Fashion Week, but also in design schools where contestants study and at the independent labels they inevitably run.”

So this is not just a Project Runway problem, but it it’s still one that the show itself could reckon with more. The season’s ugliest moment came when Nadine essentially blamed her model for her own failures.

One voice of reason when it comes to this is mentor Christian Siriano, who told Nadine, according to Cills’ essay, “it’s great to celebrate the curves, and I think that’s even more exciting.”

Christian has found his way into the role of mentor, and he’s doing more than Tim Gunn did, perhaps because he’s more of a presence in the workroom.

He offers more specific advice than summary, and that’s informed not just by what would make the best look, but also about how to do that within the constrains Project Runway imposes. After all, Christian knows that well.

But what I most like about his mentoring is how he’s a kind of charming camp counselor for the designers, constantly nudging them and telling them they better hurry up and make some freakin’ pants.

In episode three, Marni Senofonte—Beyoncé’s stylist—was introduced as a sort of second mentor, ostensibly popping in occasionally to share advice about how to style the models, which is certainly specific and useful. But her presence seems to be giving the designers permission to push themselves outside of their own understanding of what’s possible and doable.

Dapper Dan did that too, when he introduced the episode five challenge of creating streetwear. The best designers—and there are a few that have quickly bubbled to the front of the pack, most recently Hester Sunshine—are taking those sparks and throwing them onto their own kindling, and letting their creativity ignite.

All of this is judged by a mostly new panel, anchored by Nina Garcia, who’s still exacting and specific in her critiques, but also seems more playful.

The judges deliberations have evolved to feel more like conversations and debates. They huddle and talk and debate the merits of the work, and it feels like we’re eavesdropping on a conversation at a fashion show.

There’s no more blind judging, which was a nice idea but never really stopped the judges from being able to identify who created what. Now the judges are openly admitting that they’ve advocated for specific designers, like when Elaine Welteroth admitted that she’d fought for Frankie after the first challenge, but couldn’t do that again when Frankie had similar issues with the second challenge. Judging is subjective, and Project Runway is letting us see more of their preferences and tastes.

Like Hester Sunshine’s last name and delightful wardrobe, which blasts the workroom with color and imagination, Project Runway 17 is a shot of artistic adrenaline that reality talent competitions need, thanks to creativity and talent in front of—and behind—the cameras. The original truly is back again.