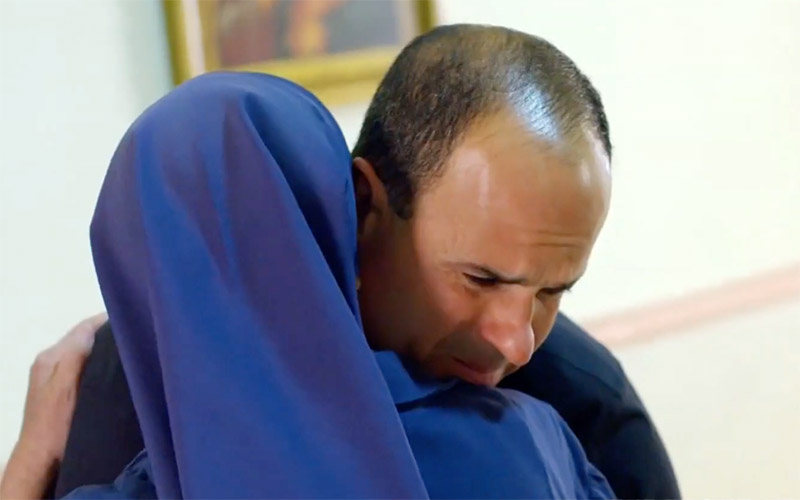 Marcus Lemonis hugs the nun, Sister Yvonne, who knew him when he was adopted from an orphanage in Beirut. (Image from The Profit: My Roots)

The Profit: My Roots opens in Marcus Lemonis’ closet—literally, a camera crew is there with him, as he packs. It is a very large closet, and also an indication of the intimacy of what’s to come, as the owner of Camping World and a growing empire of small businesses takes us along with him to Lebanon, where he was born.

What follows is the best The Profit documentary CNBC has ever produced—and quite an improvement and contrast from the last one, a rather flimsy Las Vegas infomercial.

“The Profit: My Roots” works because it is much more than Marcus Lemonis dipping into a place and meeting people; instead, it’s the intersection of his life, two wars and their aftermath, and business.

A significant part of the 90 minutes are spent with Marcus meeting people who run businesses in Lebanon. Their stories are inseparable from the war that consumed the country in the 1970s and 1980s.

It’s what I remember of Lebanon: War. Death. Bombed-out buildings. Beirut is not a place I would have imagined traveling to, because those images have lingered in my head and never been replaced by now. Lebanon still has scars, but has changed in the 20 years since, and Beirut is a vibrant city—though of course that never received the kind of media coverage that war does.

That history is wrapped around an emotional core of Marcus’ journey to the orphanage where he was adopted by his parents. As the show keeps reminding us (again and again, and then again), Marcus was living in Florida while the people he’s meeting were in the middle of a civil war.

Many of the people he interacts with are roughly his age, and the weight of his privilege seeps in: Marcus talks about feeling guilt just from referring to himself as Lebanese, because he wasn’t there during the war.

“While I was in high school in Florida, he and his brother were hiding in bomb shelters while west Beruit was being shelled,” Marcus says of Omar Kabbani, who, along with his twin Mohamed, created Ashekman, which is described on their site as “a platform for the twins to fight social, political injustice and extremism that fuels the false propaganda about the Middle East.”

But the first stop in Beruit—and one that sets the tone and stage for the rest of the special—is part of a museum complex, where he talks with architect Mona Hallak. She’s dedicated to preserving the Barakat building, which was once used by snipers to shoot anyone they could see. “This is a place of memory,” she says.

“The Profit: My Roots” shares fragments of those memories with its American audience without making it feel perfunctory, though the show’s craft isn’t always up to the task of seamlessly weaving these threads together.

The Profit executive producer and showrunner Amber Mazzola—who stars with Marcus in the “Inside Look” episodes, for which they should be Emmy-nominated as reality hosts because of their relaxed and sparkling chemistry—previously told me that the documentaries are produced by CNBC, not by her production company. So they’re just branded as Profit episodes, not truly part of the series.

The difference is occasionally noticeable. The scripted narration can be clunky, trumpeting its importance, and Marcus’ line readings work overtime to try to sell it (“Home. It’s such a simple word.” “Fate is such a strange thing.”).

But when the documentary just trusts its star, and lets Marcus talk extemporaneously, either on-the-fly or in a sit-down interview, it opens up.

Marcus Lemonis’ birth name and other discoveries at a Beirut orphanage

Marketing for the special has focused on Marcus learning his birth name, and that is a touching moment, but he doesn’t go to the orphanage where he was adopted until more than halfway through. As I’ve discussed, the time up until then is well-spent, and it all ties together.

Marcus has discussed being adopted before, and as he says early in the special (CNBC, 9 p.m.), “I love my life, I love my parents, I don’t need to know anything.”

(Skip this section if you want to be surprised by revelations during the special.)

Mustafa Kassem, an NBC News journalist in Beirut, has done all the legwork before Marcus’ arrival, and takes him to the place where he was adopted.

When Marcus arrives, an 80-something-year-old nun named Sister Yvonne hugs and repeatedly kisses Marcus, an unexpected reunion which immediately makes him cry. (Ditto.) They walk down the halls of the former orphanage, now a day care, holding hands.

When he’s overcome by emotion, Sister Yvonne just casually pulls out a handkerchief and hands it to him, which made me laugh and cry. Later, she tells him, through Kassem’s translation, “The tissue paper is so expensive. Stop crying.”

Marcus says, “Tell her, I did okay. I can buy a lot of Kleenex.” He explains that these are “tears of gratefulness. I’m not sad.”

When Marcus reads his name off of the orphanage’s record, which has been translated from French for him, he says it: “Ricardo. My name’s Ricardo.” But it’s perhaps more of a surprise where his birth mother was from:

So yes, the star of CNBC’s most high-profile reality show is an immigrant born in Lebanon of a Syrian mother.

Earlier, at the Syrian refugee camp, which is so close to the mountainous border between Lebanon and Syria that it’s clearly visible, Marcus thinks about the kids there and says, “What happens to them? What’s their future look like?”

That is, of course, left unresolved. But “The Profit: My Roots” has given us an excellent example what happens when people care about other people, and welcome them rather than rejecting them.