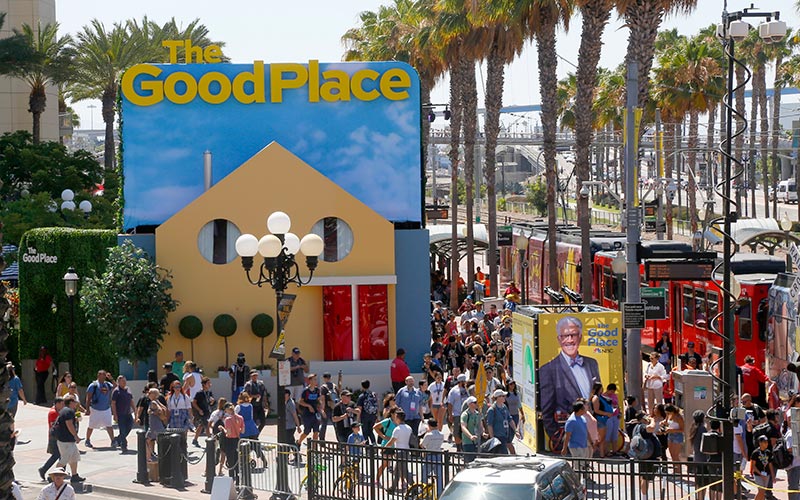 An activation for NBC's The Good Place at the 2018 San Diego Comic-Con International—and probably more people than showed up to previous attempts at reality TV fan conventions. (Photo by David Yeh/NBC)

MTV has announced its intention to produce RealityCon next summer, a convention for reality TV fans, stars, and producers.

There are very few details, but one thing we can be sure about is this: RealityCon will definitely not be the first attempt to get reality TV fans to pay to see their favorite reality stars in person.

MTV’s decision to try this makes sense, now that the network has rebounded by doubling down on reality shows—and become a sort of retirement community for reality stars from bigger shows and other networks to come and play.

There’s a large pool of reality talent that MTV could compel to show up, if cast members from The Challenge and Are You the One? would need any kind of convincing besides money to show up.

RealityCon will take place in the summer of 2020, though several reports say MTV plans a fall “soft launch,” whatever that means.

MTV News reports that it “will feature fan activations, performances, interviews, and roundtable discussions exploring the genre’s impact on society, representation of diversity in media” plus “the talent, producers, and executives behind the biggest reality hits of all time, including The Real World, Survivor, The Real Housewives, Jersey Shore, The Bachelor, Big Brother, The Hills, The Challenge, Love & Hip Hop, Mob Wives, RuPaul’s Drag Race and Duck Dynasty.”

But can this succeed where others have laughably failed?

The AV Club called it “the first-ever reality show convention,” which is not true. Reuters reported that “MTV on Tuesday announced it would host the first reality television convention.” That’s also false.

And The Hollywood Reporter calls this “[t]he first-ever event,” which is only an accurate statement if it’s referring to MTV’s event alone.

That’s because there have also been several attempts at reality TV-themed conventions before. One of them was even produced by The Hollywood Reporter’s publisher!

First, besides a few show-specific conventions, including TAR Con (The Amazing Race) and CatchCon (Deadliest Catch), there have been many charity events that function as fan conventions, as organizers bring in reality stars to attract fans and their money.

And then there have been two big attempts at ComicCon-like events, and neither worked, kind of like attempts at creating a respectable reality TV award ceremony.

Here’s a bit of history:

In the 2000s, TARCon was essentially a watch party for The Amazing Race finales, put on by Television Without Pity, an early gathering place where writers and fans discussed and recapped TV shows. Both fans and cast members attended.

In 2006, the now-defunct website Reality TV Magazine had a convention in Nashville: only 300 fans showed up, and so did 100 reality stars.

In 2009, The Discovery Channel held CatchCon in Seattle.

Two years later, in 2011, The Reality Rocks convention was held. It was was the most ambitious reality TV-related convention to date, setting itself up as the ComicCon of reality TV and naming advisors including Mark Burnett Productions, the Sundance Channel, and A. Smith & Co. Productions.

Yet even that star power couldn’t help: it had “sparse” and “anemic” crowds, according to the L.A. Times, and resulted in two hilarious takedowns.

I may not have helped: I wrote this, and also said something really mean about its lineup of reality stars in the L.A. Times: “There’s nobody I would fly across the country to see and this is my job.”

San Diego Comic-Con International, especially, has morphed into a corporate event where studios and networks spend millions and millions of dollars to preview, launch, and celebrate their biggest, most-popular properties, drawing international media to slavishly cover their advertising.

Just as MTV won’t have internationally popular A-list stars, it’s unlikely MTV will have that because media companies don’t spend money on reality shows: they’re still viewed as cheap and disposable, which is why everyone is referring to their “documentary series” now instead of reality TV shows.

Even reality stars and production companies are treated like shit, under-compensated compared to the money they can make for networks.

I may sound pessimistic here, but I truly do hope MTV is able to succeeded where others have not, creating a true celebration of the genre. That would be long overdue.

And so would reporting on the entertainment industry that includes Googling before just copying and pasting a press release.