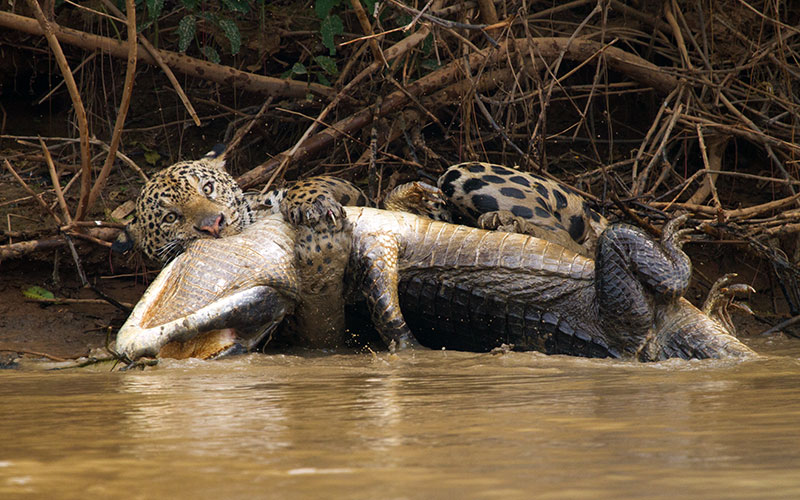 A jaguar with a crocodile in Pantanal, Brazil. (Photo by Adrian Seymour/National Geographic)

When National Geographic Channel showed this clip from Hostile Planet at the Television Critics Press tour in February, some critics screamed. Others gasped and recoiled in physical horror. One called it a “near snuff film.”

“Don’t watch this,” I said to a friend before the clip began to play. In my hotel room the night before, I’d watched two episodes of the natural history series and, during this particular part, said “I hate this!” out loud, to no one. So I had a reason to warn him.

“It’s awful. Do not watch!” I said. He watched—and screamed.

Consider that a warning: If you like small fluffy things that squeak, and like them in one piece, you probably do not want to watch this clip.

Its focus is on a barnacle goose chick, who is just a few days old, having hatched at the top of a predator-free cliff. But there’s no food there, and the adult geese make the babies follow them to food and water. Deep breath. Here we go:

Now that you’ve watch it—or not!—know that what you just watched is the happy version. As narrator Bear Grylls mentions, the two preceding baby geese—well, they don’t proceed.

That clip pretty much sums up Hostile Planet: the uncompromising brutality of nature.

As tough is that clip is to watch, well, the geese don’t care, and they don’t need my sympathy: this is how they live, and how they’ve survived. Along with footage like this, the show also points out—a lot more subtly—that humans mucking up the environment is making an already challenging life much harder for some species.

Ever since Planet Earth and Frozen Planet established that nature shows could have insane visuals, so it must be done, and Hostile Planet (National Geographic Channel, Mondays at 9) meets those expectations. It has Oscar-winner cinematographer Guillermo Navarro (Pan’s Labyrinth) as an executive producer, and it also has some new flair to add, including point-of-view shots, as cameras glide over the surface of animals’ environments.

And it can also be funny, even while it’s showing brutal death of cute things. Witness the smash-cut editing in this clip:

That turtle’s gulp after the crocodile has a snack: it made me laugh even though I really don’t need to watch a montage of cute things dying.

I’m not overly fond of Bear Grylls’ presence in the show, nor his narration, in part because I associate him with over-produced, let’s-do-this-for-the-cameras reality television. But NatGeo is into Bear now, and they want younger viewers, and so here is Bear, hiking through snow.

Last year, NatGeo’s One Strange Rock, one of my favorite series from last year, used jarring sound and disorienting visuals to connect astronauts’ experiences to stories about the planet. Hostile Planet is less audacious, but it is unafraid to go from spectacular, adorable cuteness to whatthehell NO.

It’s not particularly gory, just graphic. By refusing to turn away when other shows would cut, it’s presenting a wider picture of animals’ reality.

Netflix has its own epic nature series debuting Friday. It’s called Our Planet, and while it is essentially just another Planet Earth, complete with David Attenborough narrating. That’s wonderful; those are great series. This one is Netflix-ified so that the first episode has no discernible narrative, just one LOOK AT THIS SPECTACULAR THING after another. (They are spectacular things.)

In one scene from Our Planet’s first episode, baby flamingos march through salt fields, and one tiny fuzzy flamingo’s legs get coated with so much salt it can’t keep walking, and falls over. It doesn’t die on camera; it just walks out of the frame, never to be seen again.

This is sad and hard to watch, but Hostile Planet would never pull that shit. It’d show us that salted baby flamingo in a blender being used to make margaritas, that’s how unflinching it is.

I asked Hostile Planet’s producers about its approach—and about its ruthlessness.

“It’s not a traditional, sit back, chocolate box, afternoon treat of a show,” executive producer Martha Holmes told me. “It’s more challenging, it’s more visceral, more raw, more narrative-driven and engaging.” (I’d only quibble with “engaging,” because of the parts that made me recoil and not want to keep watching, because I’m a big baby and don’t find suffering all that entertaining.)

Programs that might edit out the more terrifying parts of animals’ lives are “not necessarily as honest,” she said. “The same thing is happening; it just depends where you turn the camera away. What we feel is really important is that you don’t pretend it’s not that and it’s not happening and they’re not struggling. They are, and they always have, but they’re struggling more. And let’s not pretend it’s all fine. At some point, you’ve got to be honest about that.”

As we discussed specific examples from what I’d seen, executive producer Tom Hugh-Jones laughed and said, “You should see the bits we didn’t show.”

Going into the production of Hostile Planet, there was a mandate to do something new. “Television’s much more dynamic, much more exciting, and you’ve really got to grab people’s attention,” he said. “So when we worked with NatGeo, they said, Look, we really want to portray the beauty and the wonder of the natural world, but we need to make this more engaging for the audience, we need to make it different, and we need to make it for the next generation. It’s been a really great challenge to try to rethink the genre.”

In other words: Don’t bore people. But also: be honest.

Production on the series took three years, with about two years filming after six months of research. Each of the six episodes focuses on a particular kind of environment, rather than a specific place: mountains, jungles, oceans, grasslands, deserts, and polar climates.

In each episode and place, there’s one animal or story the show returns to. “We tried to find a character in each show,” Hugh-Jones said. That character “might pop up three or four times and they kind of signpost the changes animals going through.”

Holmes, who leads the natural history unit at Plimsoll Productions, added, “You feel like you’re with a friend.”

Other decisions the production made affect how we see animals and their attempts to survive. Hugh-Jones, who previously worked for the BBC’s Natural History Unit and on Planet Earth II and is now creative director for natural history shows at Plimsoll Productions,” told me that “what you would normally think of a beautiful wildlife shot, it isn’t necessarily the most cinematic wildlife shot, so we’ve tried to kind of play with the imagery to make it more visceral.”

That adds depth, something wildlife shows usually lack. “The nature of filming on long lens means that you don’t get much parallax and you don’t get much separation. The whole image is compressed, so it feels flat and you feel like you’re not there. You feel like you’re looking at it through binoculars,” he said. “That’s the only way you’re going to get really great behaviors is from a distance, because animals aren’t going to suddenly catch something right in front of you.”

Let’s go back to the geese in the first clip, the scene that freaked me out the first time I watched it.

“It’s an incredible baptism by fire that they go through,” Tom Hugh-Jones said.

“Most of them survive; this is an evolutionary strategy to evade predators and to get down to the water without being eaten. It’s kind of extraordinary that they manage to do that. I think the reason we want to show it is to make people think, My god, all animals face the same challenges as we do, just in these far more extreme settings.”

“It is a hard watch but in the end we want you to leave feeling nothing but respect—the admirability of what animals do to survive, and then thinking, We’re making this slightly harder for them these days. They’ve already got to go through jumping off cliffs, and now in the face of a warming environment, that’s making it even harder for them,” he added.

Just a mention of climate change can cause some people’s faces to fold in, that’s how toxic facts—about the planet we all live on and share—have become.

“We don’t want to point the finger,” Hugh-Jones said. “We’re all living in the western world, we’re all contributing to these problems. [We don’t] pretend we’re these worthy wildlife filmmakers who never put a foot wrong and there’s these terrible other people. We’re not saying we’re the good guys and you’re the bad guys.”

Holmes said, “We so often hear it from the human side of things,” so Hostile Planet wants to remind us “that are animals out there and it’s affecting them.”

“This is as it is,” she said. “That’s really what the message is. This is reality.”