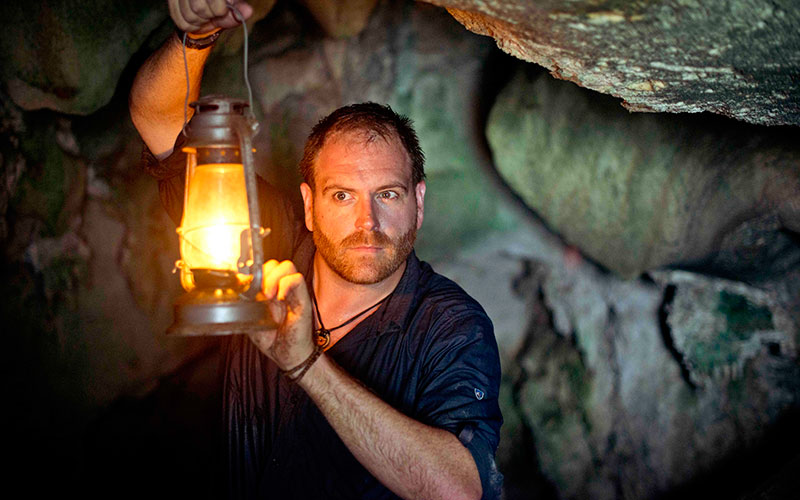 Tonight, live from Egypt, Expedition Unknown star Josh Gates will open a 3,000-year-old sarcophagus to see what’s inside. Or, at least, he’ll be there as one is opened. (Update: What did they find? Scroll down for details on the mummies.)

Opening something old live on TV may remind you of another live TV stunt from the 1980s: future Apprentice cast member Geraldo Rivera opening Al Capone’s vault live on TV, only to find some dirt and trash, which was a pretty good metaphor for Geraldo’s career.

Howard Swartz, the Discovery Channel’s executive producer on this new special, told me during an interview that “part of the fun of this is archeology live,” and that means “things happen—surprises, discoveries happen—in real time.”

But he also spoke with confidence: “it’s a 3,000-year-old sarcophagus that we believe has not been opened,” and is “unmolested by time or robbers.” He said that “the Egyptologists and the archeologists … think there’s a good chance of finding something.”

Either way, we’ll “discover in real time as archeologists are discovering,” and that’s “part of the fun for the audience,” he said.

Also part of the fun of live TV, at least, are “potential issues with live feeds” and “potential danger down there, but we’ll have an on-site team of experts to help navigate through the journey,” he said. In other words, if the feed underground gets temporarily lost, there will be people above ground to take over.

The location where this will take place is an active dig site that “was discovered a couple years ago” and will be the location of activity for years to come, Swartz said. “It’s going to take archeologists four more years to excavate the entire site.”

Executive producer Leslie Greif has been following its progress, and pitched the show to Discovery last year.

Meanwhile, Josh Gates’ show, Expedition Unknown, moved to Discovery (it returns later this week) from the Travel Channel, and Swartz told me that since Gates has an “absolute insatiable appetite for adventure,” producers thought it’d be “a great idea to put Josh on this project” after the acquisition of Travel Channel.

Gates will be below ground during the special, in what Discovery’s press release called “an underground network of tunnels and tombs with 40 mummies believed to be part of the noble elite.”

So this live show will be dipping in to science in progress. “Discovery’s primary promise is to take viewers to these places they’ve never been before and deliver on these exciting opportunities to expose them to new things, and archeology is one of those core Discovery DNA genres for us,” Swartz said.

He also told me, “we want to make this as appealing to as broad an audience as possible.”

Our interview was before the Discovery Channel released this promo, which only features men, and also before Discovery announced that casting its above-ground host, Chris Jacobs, who’s hosted other live events for the channel.

The rest of the announced live cast members are “world-renowned Egyptologist Ramy Romany” and “top experts in the field … Egyptologist Dr. Zahi Hawass, and Mostafa Waziri, the secretary-general of the Supreme Council of Antiquities of Egypt.”

So: all men. Are there no female Egyptologists? I did some extensive research, spending 10 seconds on Google, where I immediately found this helpful list: “Top 10 Egyptologists to Follow.” It’s 60 percent women. I wish I’d asked about this in my interview, but at the time, I didn’t even notice that the cast so far was all men, which is embarrassing.

Of course, one show is one show, and not a big deal by itself. The real problem is the pattern across Discovery shows: science and adventure programs that star and feature men. And if you’re truly interested in “appealing to as broad an audience as possible,” maybe make the on-screen cast reflect that world?

This is a fascinating world being explored, as Swartz pointed out to me.

“The interesting question is, Why is this important? Why should people care?” Swartz asked. “These ancient societies like Egypt, like Mesopotamia, all of their beliefs and values and inventions are all shared down through time through so many cultures. And therefore, understanding how these people live, and what they contributed—the beauty of their art, the intricacies of their language, their religious practices—that really helps inform our modern culture as well.”

What they found on Expedition Unknown: Egypt Live

Update, April 8, 8:30 a.m. This definitely was not Geraldo and his vault. The special had a number of reveals and a lot of information, including three mummies. It was broadcast live from Al-Ghorifa in Egypt, which is south of Cairo.

The final mummy uncovered was a 2,500-year-old body of a high priest, and it was in amazing shape, especially compared to a mummy shown earlier in the broadcast.

In a press release, Dr. Zahi Hawass said, “Never in my 50 years in archaeology have I experienced something on such a grand scale as this. The findings here are completely special and totally unique. This is what keeps me going. It is what keeps me feeling young and alive!”

Here’s how Discovery summarizes what was uncovered:

“…a team of Egyptian archaeologists and explorers uncovered a 2,500-year-old mummy of a high priest for the first time ever on live television. But that was not the only stunning find. In addition to the high priest mummy, two other mummies were revealed along with a treasure trove of antiquities, including a mysterious wax head.

… This ancient Egyptian necropolis has long remained a mystery until now. In 1927, an antiquities inspector first discovered the sarcophagus of a high priest in this area. However, the sarcophagus was robbed and the mummy was missing. In this historic moment, Discovery cameras were rolling live at the dig site as the mummy of a powerful high priest was revealed.

During the live broadcast, viewers also had the thrill of coming face to face with two other mummies that appear to be directly connected – the first of which was a female mummy based on the artifacts discovered in a cut above ground.

The second mummy was discovered inside the “Family Tomb,” the final resting place of an entire family from 2,500 years ago. The Family Tomb also included such unique objects as an ancient Egyptian board game, the remains of a family dog and four intact canopic jars used to store a mummy’s organs. While the second mummy was not a high priest or fully preserved, the objects inside the tomb and inscriptions on his sarcophagus reveal that he was a singer in the temple of an Egyptian god known as Thoth.

Besides finding the mummies at the site, Dr. Hawass revealed to Josh Gates for the very first time a mysterious wax head that they believe is the mold of “Irt Hrw,” one of the high priests. This extraordinary wax head is the exact cast of a 2,500-year-old high priest mummy – with such detailed features that he could have easily been picked out on the street from it. This moment lead to the stunning finale of the broadcast with the opening of a sealed sarcophagus, which contained an exquisitely preserved 2,500-year-old high priest, a ‘Great of the Five Priest of Thoth,’ covered from top to bottom with gold banding and other artifacts.”