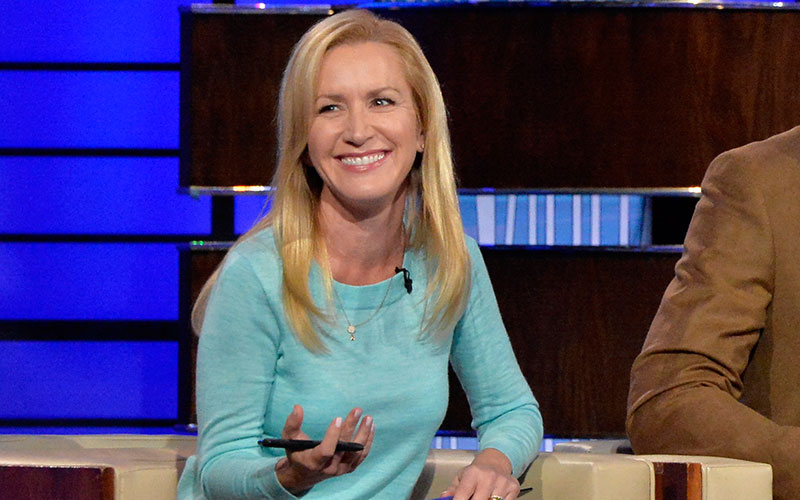 Angela Kinsey, pictured here on a 2017 episode of To Tell the Truth, will host a new reality competition series for Disney+. (Photo by Lisa Rose/ABC)

Disney revealed a lot of details about its forthcoming streaming service Disney+ today, and unlike Apple’s announcement of Apple TV+, there actually seems to be some substance—and that includes several reality TV shows, or “documentary series,” as Disney is calling them.

Those include two competitions series, including one hosted by Angela Kinsey, who played Angela on The Office, plus a show that goes behind the scenes of a Pixar movie and two that connect to the Marvel universe.

Disney+ will launch Nov. 12, and cost $6.99 a month—significantly less than Netflix.

When it launches, the streaming service will include “7,500 television episodes and 500 films,” Disney said, including The Sound of Music and all 30 seasons of The Simpsons, plus “25 original series and 10 original films,” including three new Marvel TV shows.

Among the original series are 13 unscripted shows, a few of which have been previously announced, but most of which were just revealed this week.

Here’s a look at the reality shows that Disney+ has announced so far. While a lot of these have connections to Disney properties, they also seem like they could be potentially be interesting on their own. It’s all about the execution, of course.

The World According to Jeff Goldblum

Back then, NatGeo said The Curiosity of Jeff Goldblum would have Goldblum “probing the origins and unpacking the incredible connections behind the most unassuming subjects” and”uncover how even the most deceptively simple things—from balloons to coffee—have astonishing backstories.”

The new series is described as “a documentary series where Goldblum pulls back the curtain on a seemingly familiar object to reveal a world of astonishing connections, fascinating science and a whole lot of big ideas.”

The other National Geographic-produced series will have some Disney synergy: It’s being filmed at two Orlando theme parks.

Disney+ said that Magic of Animal Kingdom is “a documentary series which takes viewers behind the scenes with the highly respected animal-care experts, veterinarians and biologists at Disney’s Animal Kingdom and Epcot’s SeaBase aquarium”

Into the Unknown: Making Frozen 2

Pixar’s reality show will go behind the scenes of the fall film Frozen 2, which could make it an infomercial or something much more than that.

Disney said it’d be “a documentary series showing the hard work and imagination that go into making one of the most highly anticipated Walt Disney Animation Studios features of all time.”

The first of two competition series is a cooking competition that will give its winner a place on the menu at Walt Disney World in Florida:

“Angela Kinsey (The Office) presides over this delicious new competition series, which gives families the chance to create the next great Disney Parks dish. Be Our Chef invites families from diverse backgrounds to join a positive and playful Disney-inspired cooking competition at Walt Disney World. In each episode, two families will participate in a themed challenge based on their family traditions and the magic of Disney. The finalists will apply what they have learned to create a dish that represents their family through a Disney lens. The winner’s magical food creation will become a signature dish or treat served at Walt Disney World.”

“Youthful ingenuity is on display in this new competition series that features teams of inventive students tasked with designing, building, and testing new contraptions to vie for the title of Shop Class Champs. In each episode, they’ll present their work to a panel of experts who will rate their projects based on engineering, design, and the final test of the build.”

In December 2017, ABC aired a one-episode show that followed high school classmates who reunited to put on an encore of a musical they first produced in high school. It was hosted and produced by The Good Place actor Kristen Bell.

It was a wonderful show, and last fall, it started casting to return as a full series for the then-untitled Disney streaming service.

“Our toes are already tapping over this series—executive produced by Kristen Bell (Frozen)—which brings together former castmates of a high school musical, tasking them with re-creating their original performance in a high school reunion like no other. Emotions run high as the former students face faded friendships, former flames, self-doubt, and killer choreography. Through it all, these unlikely groups of friends—with the help of Broadway’s best—just might pull off a standing-ovation-worthy performance of beloved musicals such as The Sound of Music, Beauty and the Beast,  Annie, and more.”

This series seems very similar to reality shows that have preceded it, including Mike Rowe’s Facebook series Returning the Favor, which highlight people who deserve to be spotlighted.

But Marvel’s will focus on kid heroes:

“Even in the Marvel Universe, not all heroes wear capes, and this new series (also produced in partnership with Marvel New Media) spotlights real-life heroes who are making remarkable, positive changes in their own communities. These inspiring kids have dedicated their lives to selfless acts of bravery and kindness, and now, Marvel celebrates them as the true Super Heroes they are.”

This will be an anthology series “that explores the intersection between Marvel’s rich legacy of stories, characters, and creators and the world outside our window.”

It’s produced by David Gelb, the creator of Chef’s Table, and his production company Supper Club. They have “have entered into an exclusive deal to create premium franchise-based and original-concept nonfiction programming for Disney+, as well as other platforms and networks across the worlds of Disney,” according to the company.

“Every episode of (Re)Connect focuses on one family with a modern-day, relatable issue that’s driving a wedge between them. Issues range from workaholic parents, overly competitive siblings, technology addiction, or a family secret that has recently been revealed. All of these families have reached a breaking point, and it’s time for them to disconnect from their busy lives, devices, and outside influences in order to address their issues head-on. With the help of a specialized expert, each family will go on a unique journey that organically ties to the issues they are facing in order to confront the family’s dilemma. Can they finally come together as a family to overcome their obstacles… and reconnect? Real-life husband and wife Mark Consuelos and Kelly Ripa are among the producers of this compelling new series.”

This sounds like a Disney+ version of Planet Earth, except it focuses on people. It will be:

“…a cinematic documentary series that centers on the adventurous lives of the people changing the way we see the animal kingdom. Each episode will spotlight conservationists and the animals they’ve devoted their career to studying, giving us a greater sense of the personal trials and professional breakthroughs that come with protecting the planet’s most endangered species.”

“This anthology series that takes a unique look at beloved films—including Pirates of the Caribbean: The Curse of the Black Pearl, Mary Poppins, The Muppet Movie, Tron, and Who Framed Roger Rabbit—through the props and costumes (now modern ‘artifacts’) that made them unique. We’ll hear from the craftspeople who created them, the actors who interacted with them, and the collectors/archives who own and cherish them in the show, which will be hosted by film historian/collector Dan Lanigan.”

“Bob Woodruff and his 27-year-old son, Mack, take fans to all the places the average tourist wouldn’t typically visit—frequently overlooked (and even misunderstood) destinations whose hidden corners surprise, amaze, and inspire. It’s the family vacation most of us are unlikely to take—but now is our chance to venture to these amazing locales via Disney+.”

I wanted to be an Imagineer when I was a kid, so I’m definitely looking forward to this behind-the-scenes doc series:

“A Disney fan’s dream, this documentary series looks at the more than 65-year history of Walt Disney Imagineering through parallel storylines focused on the people, the craft, and the business. Oscar- and Emmy®-nominated director and producer Leslie Iwerks is creator of the series that will feature exclusive interviews and never-before-seen footage from Disney parks around the globe.”