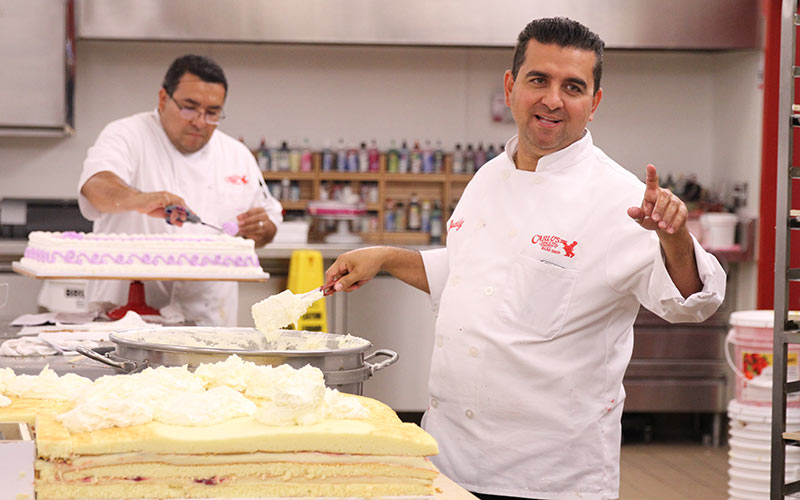 Buddy Valastro was just introduced to Food Network audiences on Buddy vs. Duff, a very weird show, and now his original series is returning to television after almost two years off the air—but Cake Boss won’t be on either TLC or Food Network.

It premiered 10 years ago, and aired new episodes through the end of 2017. Cake Boss aired many specials and gave way to several spin-offs, including Next Great Baker, Kitchen Boss, and Buddy’s Bakery Rescue.

The show is now moving to a smaller, somewhat less-visible network (what used to be Discovery Kids and later The Hub) despite Buddy’s presence on a higher-profile network.

Buddy has another show, Bake You Rich, currently airing on Food Network, and that’s a competition, like all of Food Network’s other shows (and like the recently-concluded Buddy vs. Duff, on which Buddy lost the competition to Food Network regular Duff Goldman).

Perhaps a documentary-style series like Cake Boss just doesn’t fit on Food Network, or perhaps the move to Discovery Family is using his show to try to bring attention and viewers to a smaller network.

Cake Boss—which will air Saturdays at 9 starting May 18—isn’t just about Buddy, since it follows what’s happening at Carlo’s Bakery, which has a larger staff. Buddy referenced them in his press release quote:

“The famiglia and I are back, baby! Season nine is easily one of our craziest with cakes and Carlo’s Bakery shenanigans … We love the chance to bring a little bit of Hoboken in to everyone’s homes!”

Here’s how the network described the show and new season:

“Buddy’s imagination works in overdrive this season as the exciting cake ideas from his many consultations become a reality. Dedicated to his ongoing mission to achieve his late father’s dream of making Carlo’s Bakery a household name, fans will witness Buddy in some of his most surprising situations yet. This season, Buddy and his crew design some of the most wild creations to come out of the series including an epic fire-breathing dragon cake built with pyrotechnics, a drive-in movie theater cake complete with a built-in projector screen and even a beef jerky cake! More than 50 years and thousands of customers later, Buddy and his team continue to find a way to embrace every new challenge and create sweets that are larger than life.”

“CAKE BOSS features Buddy Valastro and his Carlo’s Bakery crew as they create amazing cakes of all shapes and sizes. Family always comes first, and Buddy’s team includes his four sisters, two brothers-in-law and cousins. They along with expert bakers, decorators and sculptors are challenged each week to make the impossible both possible and edible. Together, they tackle mechanical cakes, meaningful cakes, meat cakes and everything in between. No matter what the challenge, the Valastros prove that when family works together anything and everything is possible!”