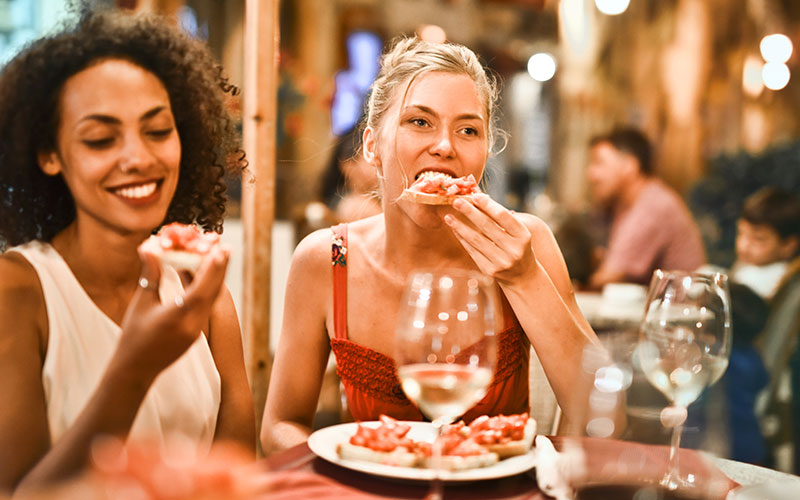 Two women eating pizza, who have nothing to do with Blind Date but generally illustrate that the resurrected show is going to include more than just straight white couples. (Photo illustration by Adrienn/Pexels )

Blind Date, the syndicated reality show that aired seven seasons between 1999 and 2006, is returning to television on Bravo, with a 30-minute episode format that sounds similar to the cheesiness and inanity of the original.

The show follows two people on a blind date, and then turns their date into a reality TV version of a cartoon in post-production. It’s now casting people in Atlanta only, and will film this summer. (Details below.)

There were 1,440 episodes of the original lind Date, THR reports, making for more than 200 half-hour episodes per season.

The reboot of the show is taking a cue from Netflix’s Dating Around and including a wider array of people (“all ethnicities, ages and sexual orientations”), and it’s about time that more than just straight white people get to date on reality television and be judged by the world.

However, the show is ignoring the minimalism of Dating Around. Instead, Blind Date will pack episodes with the same paraphernalia as the original: a narrator, plus “animations and thought bubbles” that purported to show the daters’ true feelings but mostly were just complete fiction.

“Dating has always been an awkward, contentious, sexy, and hilarious adventure. However, the magic of a blind date has gone away, replaced by the algorithms of dating apps, which have eroded dating into a casual meet-up to exchange preconceived notions. Sometimes you’re better off just going in blind!

Updated for 2019 with social media trends and diverse couples of all ethnicities, ages and sexual orientations, each half-hour episode will feature strangers who are paired up and sent off on a blind date. The cameras will follow every move as a narrator weaves in hilarious commentary with the help of graphics, animations and thought bubbles to ensure nothing goes unsaid.”

The show will film this summer, between May and August, according to the casting application, which says it’s searching for people who are at least 21 and live in Atlanta or nearby.

Those who are selected “will be needed to participate for one day for at least 8 hours,” the site says.

The application asks questions such as:

The application also asks for three references—and suggests “significant other” as one of the options. (I’d guess that was copied and pasted from another application, since a preceding question asks for relationship status, and the only options are single, dating, not dating, divorced, legally separated, and widowed.)