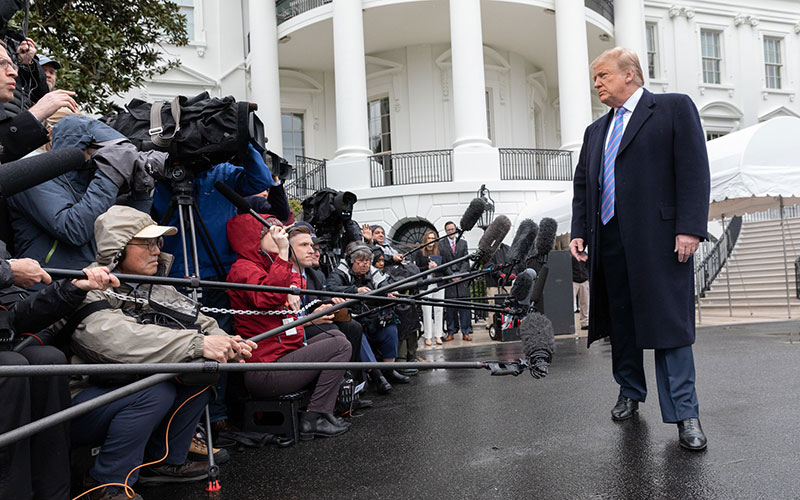 Donald Trump in front of the press outside The White House's south portico on April 5, 2019—a very different kind of media attention than he was getting 15 years ago. (Photo by Joyce N. Boghosian/The White House)

Today its star, Donald Trump, is the president of the United States of America, who instead of firing someone live on NBC has just:

How things change in 15 years.

The Apprentice was a show I immediately loved, thanks to its competition format, outstanding production values, and compelling characters.

It was also a show I kept watching for way too long, as I wrote in this essay: Apprentice editors covered for Donald Trump, and so did I.

It’s been 15 years since The Apprentice season one

The first hints of The Apprentice came in 2003, and it eventually premiered January 8, 2004. (The government would be shut down 15 years later, thanks to Trump’s inability to come to an agreement with his own party in Congress.)

“The Apprentice is a 15-episode unscripted drama in which 16 candidates from all walks of life, including both Ivy League MBA graduates and street entrepreneurs with no college education, will endure rigorous tasks each week while living together in a hip Manhattan loft apartment. The tasks will test their intelligence, chutzpah and street-smarts. They will face the challenges of living in close quarters and must compete sometimes humorous but always difficult job assignments and will be forced to think outside the box in order to outshine each other to get to the top.

Upon their arrival to New York City (some for the very first time), the 16 candidates will be rushed over to Trump Tower to meet with Donald Trump, the centerpiece and driving force of this series. After splitting the group into two teams of 8, Trump then issues the first task. Teams will be given time constraints for each task and they will be observed by either Trump himself or members of his staff at every moment along the way. At the conclusion of each task, the winning team will be granted a lavish reward but the losing team must report immediately to Trump’s boardroom where one of them will be fired.

Tasks each week will incorporate various aspects of business: sales, marketing, promotions, charities, real estate deals, finance, advertising pitches and facilities management. Most of them will be assignments that executives face in their daily lives. The big twist is that our teams are thrown out to the wolves of the New York business world with only a few days to complete incredibly difficult tasks, many of which have hundreds of thousands of dollars at stake. This is the ultimate corporate jungle where staying alive means using both street smarts and book smarts.The winner of the competition, the true “apprentice” will be granted the dream job of a lifetime with The Trump Organization and a salary of $250,000.”

The phrase “ultimate corporate jungle” connects the show to its Mark Burnett-produced predecessor, Survivor, which Burnett grew tired of traveling to produce.

Donald Trump was only meant to be its star for one season, but his popularity as a television personality—reinvented in part by the show’s framing of him as successful and wealthy—meant he stayed as its star.

(For more on how Burnett did this, read this in-depth story from The New Yorker: How Mark Burnett Resurrected Donald Trump as an Icon of American Success.)

The Apprentice was an immediate hit, leading NBC’s rivals to try to counter-program it.

Trump stayed in that role for 14 seasons, until his run for president/racist pandering led NBC to fire him in 2015.

Omarosa would go on to star in her own dating show produced by Trump, and then secure a position in his administration, earning the highest White House staffer salary despite doing a job that not even she could describe.

She eventually left/quit/was fired, and tell the world—via CBS’ Big Brother—that the United States of America is “going to not be okay” with him as president.