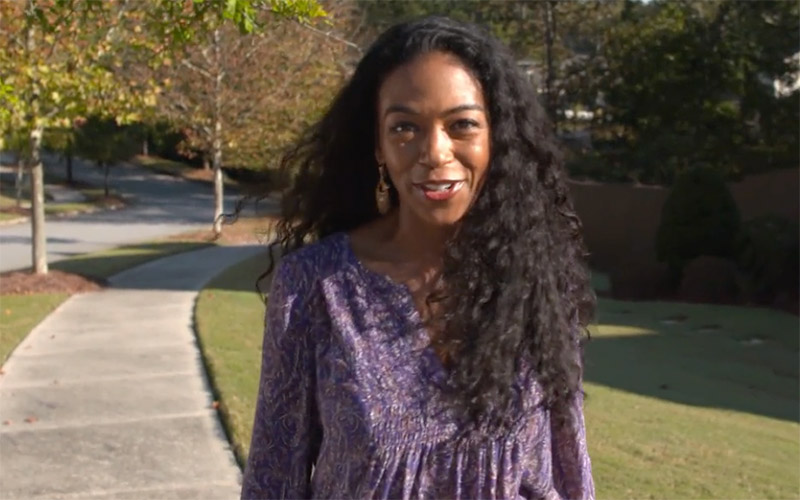 Thirteen years after the original TLC series concluded, While You Were Out has been revived on both TLC and hGTV, and the new version finds a pragmatic use for the new corporate synergy between the networks and improves on another recently revived redecoration reality show, Trading Spaces.

For the first time in reality TV history, at least as far as I can remember, two networks are airing their own versions of the same episode of the same show. While You Were Out has retained the show’s TLC DNA, but there are some curious and subtle differences between the two. Still, I expected more design and fewer shenanigans on HGTV, but there really isn’t a material difference.

The premise of WYWO: someone surprises their partner, or family member, with a renovation of a room. The person being surprised is sent away for 48 hours, but also filmed the entire time.

Now, that’s been doubled: there are two homeowners, who live near each other and are friends, and the two people being surprised are sent away together.

Its best idea was to not just double the number of designers, but quadruple them, pairing two HGTV designers, who work together on a space in one house, while two TLC (i.e. Trading Spaces) designers work on the other.

The pairing of some of these designers, who are used to working alone, is a device that potentially creates conflict, but also also potentially enhances creativity, if I am being optimistic and generous and probably also delusional.

The Trading Spaces designers are the ones who have to contend with this the most, but on the HGTV side, there are some unlikely pairings: Love It or List It stars David Visentin and Hilary Farr don’t exactly design together (and he’s not a designer), and Vanilla Ice and Rehab Addict Nicole Curtis have their own shows but work together here.

That’s something difference, and enough to elevate it past last year’s reboot of Trading Spaces, which stayed true to the original but also feels dated and kind of pointless as a result.

While You Were Out has a budget of $10,000, which feels like winning the lottery even next to the increased $2,000 per room Trading Spaces budget. And the work does seem elevated and not as slapdash, though it’s not exactly like getting the kind of epic makeover from one of the HGTV shows that requires the homeowners to pay for renovations.

Of course, ask Hildi Santo-Tomas to design a room and she’ll do something wild that causes damage and/or lacks functionality, like covering a mirror with criss-crossed strands of red duct tape, stapling felt to a wall, and covering another wall with thick, fluffy white faux fur to echo a bulldog (a dog with short hair). Next to people who think about their clients’ needs, Hildi’s inanity seems particularly out of place.

New host Ananda Lewis is terrific: She’s an active presence not just in her hosting and on-camera managing of the process, but she also jumps in to do work.

Complimenting Good Bones designers Mina and Karen, Ananda said, “As a woman in construction, I love women in construction.” And she demonstrated that, essentially becoming a third carpenter at times, whether she was sewing or cutting lumber on a table saw.

Part of what Ananda does is communicate with the “secret shooter” to find out when the people being surprised are returning. The attention to that is a little forced. The conceit of the show itself—that two people are being sent away, together, so they can be surprised by their at-home partners—is undercut in several ways that make it feel rather useless that they bother with it at all.

First, as we see on the TLC version (but not the HGTV version), the homeowners who stay behind are asked to vacate the rooms before the load-in. So basically they know about the general plan, and have seen paint or flooring, but they’re just as surprised by the reveal as their partner, who’s blindfolded.

In other words, both are surprised by what they see, but the show gives all its attention to the blindfolded person, which just ignores 50 percent of the reaction to the space. In the premiere, one non-surprised homeowner mouths “oh my god” and starts responding to the space while her husband is still blindfolded.

Speaking of her husband, let’s talk about the people being surprised, and how surprised they are.

The original While You Were Out was an attempt to capitalize on the popularity of Trading Spaces, and was half spin-off, half-clone. The format needed a reason to reveal the room at the end to someone who hadn’t seen it yet, and the solution was to send half of a couple away for a weekend.

But even then, they seemed to give people flimsy excuses, and it strained credibility to imagine that the departing person had no idea that anything was awry.

In the new version, Ananda’s narration starts by saying there are “undercover” camera operators—who are in a couple’s front yard! filming! Throughout the first episode, we’re given different reasons why they won’t suspect a thing, such as that “they think they’re filming a promotional video for the local chamber of commerce” to the “secret shooter” who’s following them, secretly.

The clear fact is: They have cameras on them for two days, including professional camera operators who aren’t hidden, and they also drive home with a GoPro camera mounted on their dashboard filming their reactions.

I watched both the HGTV and TLC versions of the first episode, “Let the Fur Fly,” and I’m not sure I’d ever do that again, though I think it’s fascinating to have public access to two differently edited versions of the same episode.

I watched each segment twice, first on one network and then on the other, and by the end, I was no longer enjoying this experiment because the episodes are different, but usually not materially so. When the reboot was announced, a report in Variety said that TLC’s version would be more relationship-focused, and HGTV’s version more how-to focused, and there are minor examples of that.

The TLC version begins with a nod to its past; the HGTV version ignores that entirely. This is strange: it’s like the show imagines 2019 audiences live in a world where they watch just one or the other, or even know what network they’re watching. Does an HGTV viewer stumble across this and think it’s brand new?

But still: it’s the same episode, with nearly all of the same footage, just tiny tweaks, like a different title sequence. The HGTV one is basically just the title card, while TLC has some graphics jumping around to music. In some spots, the the music is different: jauntier and bubblier on TLC, and perhaps more like the 2000s version.

That’s such a strange edit! Did the HGTV version need an extra second or two, so they had to clip off “for him”?

Another example, from Ananda Lewis’ narration:

Why have her read two different scripts like that? What is the point?

The clearest example I noticed of a difference in focus had to do with Ty and Hildi, who weren’t really collaborating. On TLC, he said, “Hildi is a great friend, but compromise is something that clearly she’s never heard of.”

On HGTV, he said, “None of my ideas have ended up in the room.”

On HGTV, Ty’s visit with his carpenter skipped over the conflict with Hildi and focused on a custom piece of furniture he was building.

What’s most interesting, though, is how Eric, the carpenter, says the exact same sentence in both episodes, but it means something different because of the change in focus. “You’re going to be helping me, so it’s good that you’re a designer/carpenter,” Eric says.

On TLC, the impression is basically: Since Hildi kicked you out, you can just help me with instead. On HGTV, it’s used to emphasize Ty’s skills and the amount of work they have to complete.

Later, Ananda has a conversation with Jennifer, the homeowner, about Hildi’s plan to wreck a room. The HGTV version shortens that and makes it more to-the-point about the design, while the TLC version emphasizes emotions a little more.

Ultimately, the two versions of the episodes are different, but not in a way that makes me want to watch both. And I don’t think they’re designed so that people would watch both. But I’m also not sure why they’re different, then, since the changes were so minimal.

It’s not like HGTV shows are devoid of personality clashes and petty drama, and all of the episode-one conflict is in the HGTV version, just occasionally toned down by half a notch.

I’m curious if other episodes will be more dramatically different, but also not sure if I have the patience to watch the same thing twice, since it wasn’t exactly riveting.

In the early 2000s, when I was addicted to Trading Spaces and couldn’t wait for a new episode, I didn’t really watch While You Were Out, because it felt like a watered-down knock-off, probably because it was.

Why would I trade homes with my neighbor to let them and a crazy person do a bunch of damage, when instead I could send my partner away and ask two designers to create something functional in our house?

Again, you might still get the short straw Trading Spaces designer, but it seems like a lot better odds on While You Were Out, which also gives the homeowner more agency—perhaps because they’re actually there! It’s easier for a nutcase to wreck a living room when only the neighbor is there.

I’d rather watch the Trading Spaces designers on While You Were Out than on Trading Spaces. There’s just more here, and not just because each network has their own version.