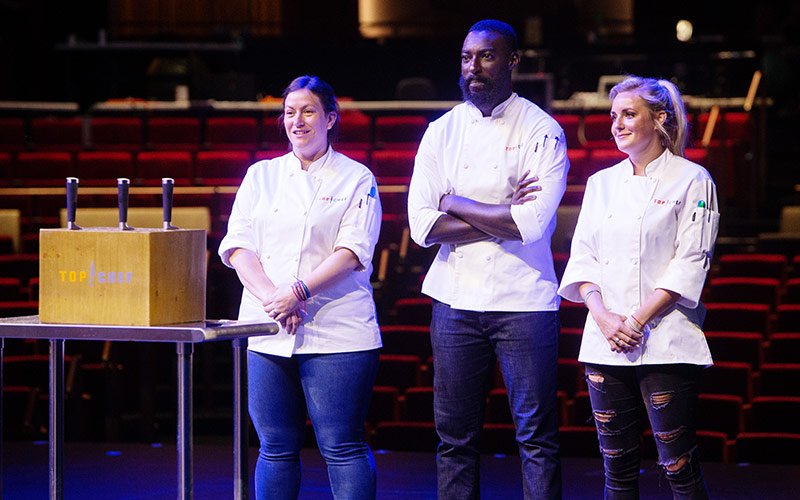 Top Chef Kentucky was a remarkably quiet but enjoyable season of Top Chef, with a group of talented chefs who all really seemed to connect and get along, while still being formidable competition for each other.

What was annoying about it, though, were its twists: the final elimination during the finale, and Last Chance Kitchen’s insanity, which I wrote about previously. A show this late in its life should be more confident in its ability to deliver without having to construct artificial drama.

The visit to Macau was one of the most effective series of finale episodes, at least in the way the challenges and the chefs integrated local cuisine and ingredients.

For the final challenge, the three remaining chefs had to cook a four-course meal. The twist: After two hours in their initial prep time, they had to serve their first course to the judges.

And one of them would be eliminated, sent away mid-prep, after buying $500 worth of food that was now completely useless.

Also useless: twists like this. Why not just let all three of them cook and serve? I wanted to see everything that Eric Adjepong had to offer, but instead he went home for a slightly overcooked taro chip made by a sous chef.

He was having trouble executing dishes during the previous two challenges, and was up for elimination both times, so it’s likely he wouldn’t have won. But there was just no reason to eliminate someone in the middle of preparing a finale meal.

If the network or producers were convinced that the episode really needed more drama and content, why not taste the first course and give feedback? Maybe they’d adjust; maybe they’d second-guess.

But just let the chefs cook so we can see what they can do.

That is what this season did best; the challenges, for the most part, were straightforward and allowed the chefs to showcase their skills, their culinary traditions, and themselves.

Although I was disappointed in that twist, I would have been happy with any of the final three chefs winning: Eric, Sara Bradley, and Kelsey Barnard Clark all had very different stories and different styles of cooking, and all seemed to be doing something different and new.

The ultimate winner, Kelsey, is a caterer who’s now cooking modern, chef-y food. As Tom pointed out earlier in the finale, no caterer has ever advanced as far as she did in Top Chef, and of course, she’s now also won the show.

Runner-up Sara is from a small town in Kentucky, a place she described as not traditionally associated with modern cuisine.

And as Eric said, he was “pairing traditional sauces and things that are very indigenous to me and the region with very classic French techniques,” all while also connecting his food to a bigger story: “My story is an unfortunate story but it’s a story that needs to be told: the trans-Atlantic slave trade.”

As Tom told Eric, “For a lot of your life, you’re told, You can’t do food like this. But you’re kind of blazing a new trail here.”

Kelsey is, too—for her cuisine and in other ways, including that she’s now the fourth woman to win Top Chef in the show’s 16-season history.

Shortly after Padma Lakshmi announced Kelsey was Top Chef, Food & Wine Editor-in-Chief Nilou Motamed—who’s been great as a judge, but please also bring back Gail Simmons—referenced Kelsey’s growth through the competition and said, “You fucking grew a pair of balls like nobody’s business.”

Padma replied, “It turns out you don’t need balls. Breasts are fine, too.”