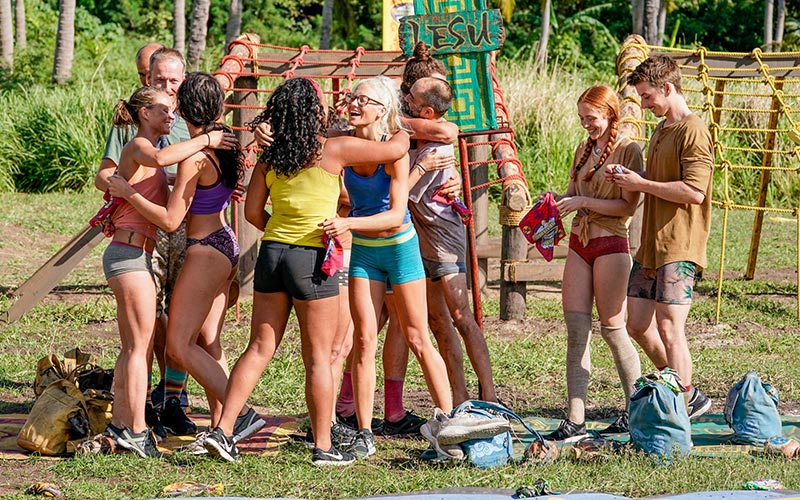 This week, the merge arrived, along with the reveal of this season’s big twist to the remaining cast members. And Survivor fell apart, at least in terms of exploring what was happening and why—you know, nothing important.

The episode opened with a wide shot of the island and a zoom-in to a challenge arena, which was an abrupt start but fine for a merge.

The players arrived to learn they’d merged, but they might have guessed something else was up since the challenge had just six lanes for 13 of them. Even running in two heats, that wouldn’t have worked for an individual challenge, and 13 people don’t divide easily into six teams.

Rick Devens later pointed out that there’s also a spoiler on their buffs, which depict the Edge of Extinction.

Before he and the other Extinction inhabitants showed up, Probst tried very very hard to make this an Iconic Survivor Moment, pointing out that “some moments take years to become iconic” but others happen instantly.

You know what 100 percent does not make an iconic moment? Labeling it that before it even happens, especially when that thing has already happened and everyone hated it. Speaking of, here’s Jeff Probst in 2005:

“I hated the Outcasts. I felt it went against everything we say the show is about — that if you are voted out, you are out of the game. In addition, it cost us a great player in Andrew Savage and in return gave us Lill, the most undeserving final-two member ever. But the flip side is, you ask people what the memorable things are about the show and Outcasts always comes up. So, was it a good twist? I guess so. I just philosophically hated it.”

I think it’s fine to evolve and change, and consistency and a lack of growth are boring. But in this case, I agree with 2005 Probst, if only because having 18 people still on the show at the merge means we have not yet to had time to get to know most of them, including the massive tribe that kept winning and now a dominant alliance.

Also: Probst declaring a moment before it happens is exactly what’s wrong his stewardship of Survivor. He’s trying too hard.

Back at the challenge, Probst first told everyone that Extinction players had worked just as hard, which isn’t true because they’re out of the game and not involved in strategizing, nor are they consumed with paranoia about being a target. They just have to walk to get rice.

Then he told them some of the advantages won on Extinction, which apparently aren’t private: Chris got equipment to practice the create-a-pole part of the challenge (and Aubry flew right past him during that stage), and Keith received the ability to disadvantage Chris (giving him 30 knots to untie before the final stage of the challenge).

The disadvantage didn’t stop Chris for too long, and once he received the bag of balls for the next stage of the challenge, gave Kelley an opportunity to say “wonder boy got his balls.”

The final stage was difficult—sliding a ball up a curved track while standing on a balance beam. Wendy almost won, and was mere inches away before dropping her ball, and then Chris did the same thing.

Rick Devens did not drop his ball, and won his way back. “I’m a whole new man,” he said.

After the merged tribe left, we had an episode of The Jeff Probst Show, where he made them stand and talk emotionally about how amazing Survivor is.

I agree; it’s often been amazing, and it’s certainly been a significant part of my life for 19 years.

But talking about something is not as interesting as watching it, and Survivor: Extinction Island and its deluge of twists and turns are keeping us away from just watching and getting to know the players.

Probst was also trying to milk a moment before revealing that they could choose to go back to Extinction, which resulted in one of the best spontaneous reactions in Survivor history:

“Let’s fucking do it!” Aubry screamed, her body jolting to life. Now there’s an iconic moment.

The merge has no room for coherent editing

Up to the merge feast, the episode was moving along just fine. But that’s when things began to fall apart.

We cut from the merge feast to a drone shot of two people walking across the beach at Extinction, and then to an extreme close-up confessional, with Chris talking.

And then suddenly we learned that two people were leaving—what? But who? For some reason, the footage seemed to be deliberately avoiding showing us. But that just made it weirder when we learned Keith and Wendy left, because Keith had just seconds before been talking about how awesome it was that he didn’t quit, and then he quit.

How much time elapsed between the challenge and their decision to leave? Why did they decide to go? Why did Wendy, who spent the least amount of time there, be ready to leave so fast? Did they know they were bypassing the chance to be on the jury? (Answer: No.)

Speaking of burning questions: Where did all of Joe’s hair come from at Tribal Council?

The episode then cut back to the merged tribe where they were talking strategy as if they were about to go to Tribal Council. Devens knew he was the “easy vote”; Julie thought it was immoral (what?) to vote him out again, and that Kelley and Lauren were “so brutal” to suggest that.

Rick discovered a gift in his bag: another advantage and twist, which is exactly what this season needed.

However, it was an immunity idol that 1) doesn’t currently work, and 2) has to be split and given away, until it 3) gets rejoined together and gets power later, assuming neither of those people were voted out. Rick shared it with David.

Cut to the immunity challenge, where everyone balanced statues on a pole, and Julie won. Besides immunity, she now suddenly has all the attention of a winner’s edit, from the focus on her strategizing to the other players’ commentary about her muscles.

Then a chicken showed up; bless it for a moment of comic relief.

Joe told Kelley, “I don’t trust most of my Kamas.” And he was right not to: They voted him out.

Julie had insisted that it was “too soon” to vote him out. Why did she change her mind, and why does she think that?

I can come up with one reason: Because Extinction Island was made for Joe. He’s going to sit on Extinction with everyone—who also happen to be the jury!—and maybe fish for them, built them shelters, and go on Target runs. And then very possibly, he’s going to win his way back into a game, a game that now includes another challenge—fire making—as a ticket to the final three.

The fact that Reem, Chris, and Aubry are the new jury, yet also might return to the game, is both fascinating and weird, and I’d like to know more about how this works. If someone gets voted out and doesn’t choose to go to Extinction (which has not yet happened), are they on the jury? What if an Extinction resident who’s been on the jury decides to leave? Are the still on the jury, just living the high life at Ponderosa now?

So many questions, so few answers. So many twists, no time to explain why the 13 people voted—though thankfully, we did see their votes this time.

Original Kama members Eric, Gavin, Julia, Julie, Ron, and Victoria voted for Joe, though original Kama member Aurora voted for Rick, as did Joe. Manu members Kelley, Lauren, and Wardog voted for David. And Rick and David voted for Kelley. Is this all just original tribal lines? Was Joe resigned to his fate, considering he spent the day painting instead of talking?

“It was just weird,” Rick Devens said. He meant Joe, but he could have easily have been talking about this entire episode.