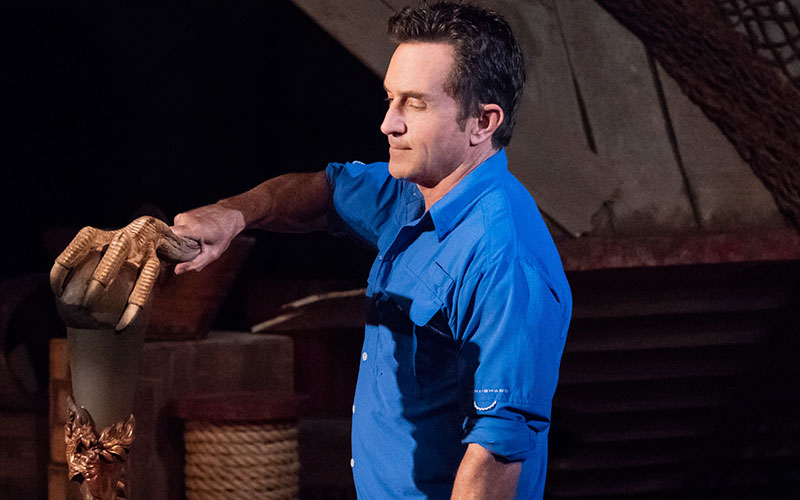 Jeff Probst snuffs the torch of the first person voted out of the Survivor: Edge of Extinction double episode. (Photo by Robert Voets/CBS Entertainment)

Survivor: Edge of Extinction introduced a modified version of Redemption Island and the Outcasts tribe: the Edge of Extinction, a purgatory where any voted-out contestant can choose to go and wait around for a chance to re-enter the game.

But what happens when someone is voted out and has a hidden immunity idol or other advantage? Can they keep their advantages and use them again if they make their way back into the game? (This story discusses the results of episodes 5 and 6.)

First, every single player voted out of the game so far has opted to go to the Edge of Extinction, so we’re moving toward the possibility of all 18 players staying on the show all season long.

During Wednesday’s double episode, Aubry Bracco was voted out unanimously by her tribe. (Tangent: Is it possible to have a unanimous vote on Survivor?)

She did not play the hidden immunity idol she had, nor did she use the extra vote gifted to her by Edge of Extinction resident Rick Devens.

So what happens to those two advantages? Can she still keep them, since she’s still on the show?

The answer is no. Both of them are now useless. Let’s explore why that is.

First, her hidden immunity idol. Via a screenshot from the Survivor subreddit, here’s the note Aubry found with her idol:

Interestingly, previous version of hidden immunity idol rules have referenced physical possession of the idol, but this does not.

Here’s the full text, with my emphasis in bold:

You have found a hidden immunity idol. When played at Tribal council, any vote cast against you will not count.

If you intend to play the idol for yourself or someone else, you must do so any time before the votes are read.

If you do not use the idol and are voted out, the idol no longer has any power in the game. The last time you can use this idol is when there are five players remaining in the game.

Those at the Edge of Extinction are still on Survivor the television show, but they are officially out of the game—at least until one or more of them win their way back in, which will happen next week.

They’re like a tribe—or a “dysfunctional family,” to quote one of Extinction’s newest residents. They’re receiving maps and clues to find advantages, and getting lots of screen time. In short, they seem like they’re still actively in the game. But again, they’re not.

Just to be clear: host, executive producer, and showrunner Jeff Probst confirmed that both Aubry’s idol and extra vote are now completely useless.

So Aubry is out (for now!) and so are her advantages (forever!).

How Survivor is produced: Jeff Probst reveals many behind-the-scenes details