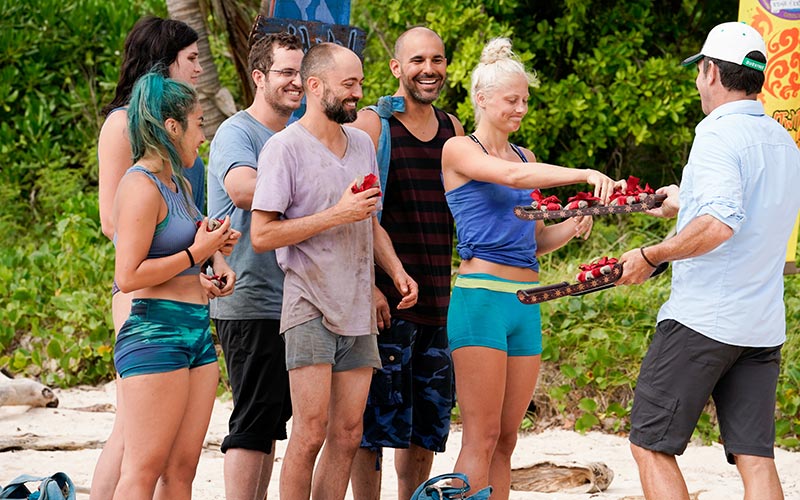 The Manu tribe, shortly before losing Wendy and changing their name to the Lesu tribe. (Photo by Robert Voets/CBS Entertainment)

The tribe swap was an excellent metaphor for this season: Two tribes became three, and the random buff draw left two tribes almost exactly the same as before, just with the largest tribe was split in half and Wendy joined one of those two new tribes. The old Manu lost again.

Something happens, nothing matters, welcome to Survivor Edge of Extinction, where votes have essentially no consequence and a grown man shouts to other adults to explain puzzles (“You will know when you’re making progress as you start to see these symbols come together”).

This is not a bad season of Survivor, but it is sure as hell isn’t a good one yet, either, and is pushing me toward the edge of boredom. The magic of last season showed what Survivor is capable of.

With the tribe swap, we only got one challenge—and it was a repeat. Rick was blindsided, and so was David, but that barely landed since Rick just shuffled off to the Edge of Extinction to mope while they wait for Joe to be voted out and then beat them all and win his way back into the game.

We spent more time on Extinction this episode, not just opening with Chris’ arrival—and the immediate rejection he received.

Is this what early arrivals at Ponderosa are like? Bitter and angry? On Ponderosa, the web series, which usually picks up with the jury, people tend to greet each other warmly, perhaps because they’re all really out of the game.

On Extinction, they’re just miserable and in the dark about what’s happening.

Reem was characteristically honest (“you’re not going to show up here and be treated with open arms”) and also hilariously confusing (“You’re not going to come in here to the freakin’ Holiday Inn,” she said of Chris, who didn’t show up asking for a room). Oh well; she’s entertaining, and any incoherence is probably just because she has to walk up stairs for her rice every day.

When we went back to Extinction, after a big storm left everyone wet and miserable, Keith told us he’s fantasizing about calling for the boat to take him home: “That mast is my food, that mast is my burger, it’s a nice bed, it’s a hot shower, it’s a freaking dry towel.”

He and Reem stayed away from Chris, who called Extinction “voluntary torture,” which might also have been a good subtitle for this season.

In a nice moment of reflection, Chris talked about his “fear of failure, need for approval, just trying to be perfect, perfectionist—and all those fears happened. I failed. It got me voted out. This idea of playing a perfect game is completely shot. Coming to terms with that, maybe that’s a part of this journey too.”

Chris did have some success, catching two tiny fish and warming Reem and Keith up to him. Give your enemies some fish, and they’ll talk to you again.

It’s some damn good luck that Wendy—very clearly the next person to go Extinction if her losing tribe kept losing—ended up on a brand-new tribe.

My favorite moment of the episode was when Aubry said that if Wendy frees the chickens, “I’ll eat big Wendy.” I immediately went to find this GIF, as did Survivor alum Jessica Lewis:

Wendy did free the chickens. Ugh. At least one loose chicken provided some comic relief during an interview.

I don’t understand Wendy, who started the episode by saying, “I understand that I was being crazy by taking the flint,” but somehow thinks freeing these chickens—which will probably die wandering around—is a smart move.

I also don’t understand Wendy telling David her “master plan,” too. She said she plays “like a wild card,” and she sure is charming about it, but that would suggest she has a deck or even a seat at the table.

I don’t think she has either; she’s just so far outside of this game.

That brings her total to zero.

It’s ridiculous that Survivor ignores people like this—and there are several people this season who’ve had little to no focus, though they’ve at least had two or more confessionals. And in Julia’s case, it also matters because representation matters.

What was even more frustrating, though, was that Julia searched through Joe’s bag to see if he had an idol, having been prompted by Ron, who said he’d distract Joe for as long as possible.

But Ron got a series of confessionals; Julia got zero.

I’m not a fan of players violating each other’s privacy like that, and messing with their things, but why can’t we even hear Julia talk about why she did it or what she found? She said “no” and gave some details—but the camera stayed on Ron. (Does that mean the audio of her talking came from a confessional? Hmm.)

The really damning moment came at the tribe swap, however. When the Kama tribe saw that Manu voted out Chris, they reacted—and Julia had a big physical reaction.

I don’t care, but I am reading a lot into the way Jeff Probst ignores women repeatedly and consistently. It’s a pattern of behavior that’s so obvious, yet has not changed.

Meanwhile, after the old Manu lost yet another immunity challenge, Lauren was nauseous and not eating, and told us, “I really underestimated how difficult it is to not eat and to not sleep. It’s a lot harder than I was ever expecting it to be.”

So she was a possible vote, as was Rick, because Kelley was worried about him flipping at the merge.

When David told Jeff Probst, “It is the most incredible Tribal I’ve ever been to,” Probst spoke for me—just like old times!—when he said, incredulously, “Tonight!”

This was one of the most incredibly boring Tribal Councils ever. That happens. So do weak seasons. But tribe swaps shouldn’t keep happening, especially if it means ignoring so many people and changing nothing.