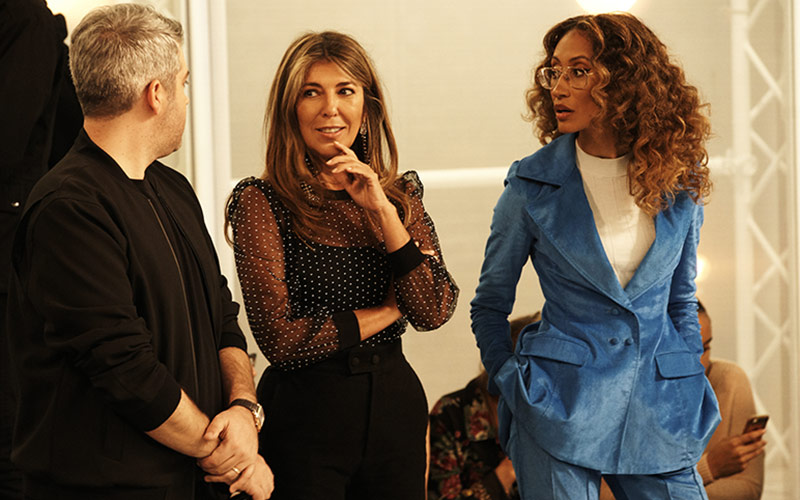 It is not a spoiler that some of the designers struggle on the first Project Runway season 17 challenge: with time, with design, with their models. After all, that happens every season.

Among the designs are one that turns a history-making model into “a goddess,” one that is well-constructed but boring, and a few that show flashes of creativity but are sloppy and incomplete.

The return of Project Runway to Bravo itself has elements of all of those garments. The promised “reboot” is still visibly Project Runway; it was unlikely that a show in its 17th season isn’t going to spiral off in a brand new direction.

Some of its changes are welcome, like the bright, airy, and lived-in workroom (they don’t even clean it up before the eliminated designer films the segment in which they pack up their stuff), and their new residence: a big penthouse where everyone lives together, not tiny rental apartments that each cram in a few designers.

I also appreciate the return of several musical cues, and love that—like Top Chef—the safe designers now get to watch the critiques from backstage.

Some of its changes are unnecessary, like the designers doing a “photo shoot,” emphasis on the scare quotes, using an iPhone. The photos will be for an Instagram story (angry old man tangent: enough with social media co-opting the word “story”!), so viewers can pick an outfit that will be sold in a flash sale.

It’s nice to be able to buy what the designers create, but that is not a new thing for fashion reality television; entire series have been built on that premise. In fact, a 2011 Magical Elves-produced NBC show followed in the footsteps of a 2009 Bravo show that offered clothes for sale.

The establishing shots of New York City now have dress forms in their foregrounds, and the designers don’t stand on the runway to learn who’s safe, they just get up from their benches and walk backstage.

It’s all more relaxed and casual, opening with a cocktail party on the stage that introduces the contestants via a runway show, a nice focus on them.

The first episode does briefly seem to lose focus on the designers, pivoting to a clever first challenge that instead allows the new judges to tell stories of their lives in fashion: the designers are split into four groups, with several assigned to each of the four judges (Nina Garcia, Brandon Maxwell, Elaine Welteroth, and host/judge Karlie Kloss). The judges show a photo from early in their career, and spend considerable time sharing stories about that photo and what inspired its selection. That photo is the inspiration for the designers’ first challenge.

That sets the stage for what’s to come, which is a lot of focus on the people, and that’s a welcome change. Although the designers are a little short-changed by the early focus on the judges, it seems clear by the end that the they, too, will be well-developed. The case seems to have a lot more experience in the industry than other casts.

It’s so much more character driven that the contrast surprised me enough that it at first felt a little narcissistic: Look at our judges! Aren’t they amazing! And we got amazing contestants too! Ones with experience! (The feeling of narcissism isn’t helped by the way Bravo has awkwardly added its name to the top of the Project Runway logo, although that’s understandable, considering that Project Runway All Stars is still airing on Lifetime, and there’s bound to be confusion.)

Those who want to focus entirely on the creative process have to wait: it’s about 15 minutes before anyone even starts sketching, and a third of the episode goes by before work begins in the workroom.

But there’s a trip to Mood, and pretty soon it’s back to business as usual, whether that’s thoughtful critiques or time wasted on the hair and makeup product integrations. And just wait until you see and hear about those erasable pens!

The actual results of the first challenge are, alas, less interesting than some of the pieces the designers show in the opening reception fashion show. Of course, they had more time on those pieces, and were able to select their best. They’re still learning to adapt to the pressures of designing on a reality TV show.

How Project Runway’s new judges and host did

Christian Siriano’s casting was brilliant, and I think he was the perfect choice to replace Tim Gunn; Christian was terrific as a judge on Project Runway Junior.

In the first episode, though, he does a fine job of co-hosting, but feels surprisingly hesitant and quiet during his critiques. Perhaps I’m used to Tim Gunn’s well-practiced confidence and bursts of personality, but while Christian gives useful advice, it’s flat and also dotted with generic responses: “you’ve got a lot of work,” “I’m excited to see it.”

My favorite moment with him comes later in the episode, when a contestant breaks down after a model fitting, and Christian leans on the table and relaxes into his advice, helping the contestant relax, too.

Those casual moments are what I liked best about the first episode of Project Runway 17, because they let the whole show relax and settle.

Everyone feels a little hesitant, though Karlie Kloss plays this well by just acknowledging it, such as with charming meta commentary on the lines she’s supposed to deliver.

The judges are fine—still figuring each other out, but that’s interesting because they’re sometimes on wildly different pages about what they think about certain designers’ work. This first episode had a lot more back-and-forth disagreement than I can recall, and I hope we continue to see different perspectives from them.

There are moments when Project Runway gives a little too much focus to itself. The show is not subtle about the fact that there are models of different shapes and sizes, in addition to the show’s first transgender model.

I’m glad the show is representing more than one type of body and being more inclusive; there’s a bit too much Look what we did! rather than just doing or being.

That said, I appreciated hearing Mimi tell the designer she works with about how she’s making history. “I want to change the industry, ” Mimi says. “I wanna inspire all the transgender young generation who have a dream.”

That also just turns her into more than a body onto which some clothes will be displayed, or a problem to be solved—and alas, some models’ bodies are still presented as problems for the designer (too tall, too curvy).

Mimi’s disclosure instantly connects her to her designer, who is not transgender but finds similarities in the “stories of oppression” that make up their pasts. He lights up and it takes his energy and enthusiasm for creating an outfit to a new level.

I hope Project Runway continues to develop everyone—models, designers, judges, mentor—into three-dimensional characters but without losing focus on the creative process and craft. As Project Runway proved 15 years ago, artists challenging themselves in an extreme environment produces both great art and wonderful television.