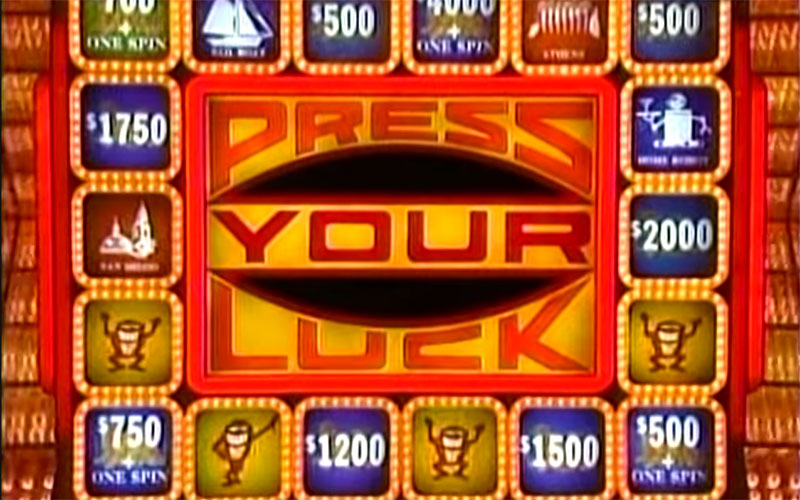 An image from an episode of Press Your Luck that aired on GSN.

Three years ago, ABC began reviving classic game shows from the 1970s and 1980s, and that’s brought us shows such as Match Game and The $100,000 Pyramid, and brought me a lot of joy.

Now, two more classics are returning: Press Your Luck (and its Whammys) and Card Sharks.

ABC’s reality TV executive, Rob Mills, tweeted that he was “[v]ery excited about this” and added that two fans of those classic game shows, TV critic and reporter Joe Adalian and the website Buzzer Blog, “finally wore me down!!”

Both will air this summer, presumably paired with new seasons of ABC’s other revived game shows. Press Your Luck is now casting, as is Card Sharks.

Vulture’s Adalian notes that “Last year, the combo of Feud, Pyramid, and To Tell the Truth averaged 5.4 million viewers on Sunday nights, winning the 8 to 11 p.m. summer ratings battle.”

Neither has a host yet nor a specific premiere date, but they do have producers: Fremantle is producing the revivals, with John Quinn onboard as showrunner for Press Your Luck, and Scott St. John showrunning Card Sharks.

In its other revivals, ABC has stayed close to the original format, tone, and look/feel, which works well for feeding that nostalgic itch. It’s like watching the original, but in HD.

Press Your Luck was always a go-to favorite, and I watched regularly during vacations or when I was home sick from school. Hosted by Peter Tomarken, it aired only three seasons from 1983 to 1986, but produced 758 episodes, which have been repeated many times on GSN.

The show was actually revived by GSN in 2003, as Whammy! The All-New Press Your Luck, which felt like Double Dare 2000: a glossier, more high-tech version that dumped all of the great things about the original.

Nickelodeon’s new reboot of Double Dare managed to update the show while recapturing the spirit of the original, and I’m expecting ABC to do the same with Press Your Luck, and learn from the failed revival.. (We don’t need photorealistic Whammys, for example, we need crude cartoon character Whammys.)

Speaking of Whammys: If you’ve never seen the show, its contestants answer questions to earn spins on a game board that consisted of 18 small squares or screens surrounding the show’s logo. Different prizes or pitfalls would flash onto each square. Meanwhile, one square at a time would light up, with that light jumping around to different squares.

Contestants try to stop the light on a square that has a good prize, like cash or a trip—and try to avoid squares with little cartoon characters called Whammys, which are essentially a cartoon version of Wheel of Fortune’s bankrupt wedge. Before they pressed the button, they’d say “no Whammys!”

If they hit one, animated versions of the Whammys would pop up whenever a contestant landed on them, and essentially mock the person’s failure. Watch:

It turned out that, in early years, the prizes and the light’s movement were predictable, switching between just five patterns. Michael Larson discovered that, memorized it, and broke game show records by winning $110,237 in a single episode. To hear the full story, listen to episode 412 of This American Life, “Million Dollar Idea.”

Here’s how ABC describes its version of the show, which will presumably have a truly random game board, and not one that can be memorized:

“Press Your Luck is a game of wits, strategy and even higher stakes as contestants try to avoid the iconic and devilish WHAMMY for a chance at life-changing cash and prizes. During each game, three contestants compete against each other answering questions to earn spins on the Big Board. Contestants then use their spins to win cash and prizes while trying to avoid the WHAMMY, who could take all of their winnings and leave them with nothing. The winning contestant moves on to the All-New Bonus Round to face the WHAMMY in a final battle for the chance to win a fortune. John Quinn is the showrunner for Press Your Luck, in addition to serving as an executive producer, along with Fremantle’s Jennifer Mullin.

Five different versions of the game show Card Sharks aired since it first premiered on NBC in 1978, and almost 2,000 episodes of it have been produced.

The game’s format has changed, but has involved one of two players answering a question about how people responded on surveys (similar to Family Feud). That player’s answer is used by the second player, who says whether they think the actual answer is higher or lower.

Whoever wins the face off gets to see one of their cards (from a deck of 52, shuffled before the show) and guess whether the next card will be higher or lower. They can decide whether to continue or stop, and risk losing their prizes.

Here’s how ABC describes the format:

“Card Sharks is a game where one turn of a playing card can make you a winner or a loser! The road to glory and riches begins with two players who face off in a head-to-head elimination game with the goal of one player making it to the grand prize winning deck. The anticipation builds as each contestant has to decide if the odds are worth the risk of losing it all and making it to the big game. Ultimately, players can either take their earned cash and quit or continue betting with the hope of reaching the top for a chance to take home a life-changing cash prize. Card Sharks showrunner and executive producer is Scott St. John. Jack Martin and Jennifer Mullin are also executive producers.”