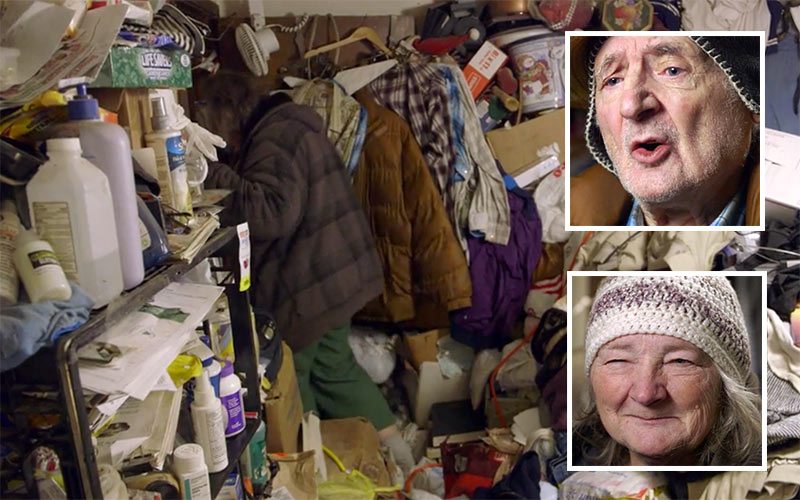 Hoarders season 10 started with Andy and Becky, whose hoarded house had 160 tons of things. (Images from Hoarders; composite by Andy Dehnart)

Early in the first new episode of Hoarders in two years, which premiered last night, I thought, Why am I watching this? I already know and understand that hoarding disorder is a mental illness, and I don’t need images of a hoarded house or a hoarder’s denial to tell me that.

Watching a man make breakfast in his filthy bathroom, or a woman tweet to Donald Trump because she thinks the government is coming after them offered quick flashes of shock, but almost immediately I thought: This isn’t entertainment.

And then there was A&E’s gross ad calling the show “America’s original declutter obsession,” as if mental illness is something to be obsessed about, in the same way you’d be obsessed about Stranger Things, and as if that kind of transparently desperate advertising is going to convince Marie Kondo fans that they’re watching the wrong show.

But after two hours, I was glad Hoarders is back to tell its stories—and to do it in-depth.

First, while the show has always walked a fine line between documenting and exploiting, and sometimes really landed on the wrong side, it is also helpful in two different ways:

Of course, just as the show can’t guarantee viewers don’t just laugh at and mock the people they’re seeing, it also can’t force its subjects to go into therapy. It can’t even force them to throw things away.

Season 10 starts with Andy and Becky

The final episode of Hoarders in January 2017 was two hours long and focused on a single situation, which was a departure from the show’s usual format of two hoards in a one-hour episode.

This season follows that format, spending more time with fewer people; as a result, there will be just five new episodes in season 10, each of which is two hours long.

In my review of that episode, I said it “illustrated why the show should be renewed and continue to help people, even if their mental illness sometimes prevents people from receiving the help.”

That’s what it seemed like was happening again with Andy and Becky, two people whose hoard was 160 tons of stuff, and stretched all the way to the ceiling and buried the back yard.

We’ve seen conflict with local officials before, but this was new levels of anger directed at government, with Andy throwing out labels constantly: “the damn liberals,” “this damn communist city,” “these commies, these nazis.” Becky even wrote a cardboard sign asking for help, and tweeted it to Donald Trump.

Their frustration is understandable, but their inability to see their own living conditions, and how much it affected their neighborhood and community, was just sad.

The longer format meant that the therapist didn’t show up in act one or two, so it took a while before there was any glimmer of help or hope.

But when Dr. Michael Tompkins showed up, so did empathy. He asked them questions and didn’t judge their answers.

“Every day is impossibly difficult,” Dr. Michael Tompkins told viewers. “They pay such a price to just live.” He also made it clear that they were in crisis: “This home would burn in a matter of minutes. It’s a death trap.”

As the cleanup got underway, there were multiple arguments between the crew and the family, which blew up at one point and illustrated the emotional toll hoarding takes on those who are trying to help.

The episode’s organizer, Erica DiMiele, was left in tears after conflict between her and some members of the family. “It’s important for you to not take it personally,” Dr. Tompkins said, “because then you won’t be effective.”

But even he doubted they would be able to help, that’s how challenging this situation was: “I’m very concerned that we may not be able to save them from themselves, actually,” he said at the beginning of the episode.

Andy’s son, Russ, showed up and was at first defensive and protective, but once he saw the inside of the house his father and stepmother were living in, he got emotional, and went from yelling at a cop to protect his family to saying, “This is out of control, Dad. What if you get hurt?”

The way he approached helping, though, was remarkable, especially when he had a breakthrough moment, comparing his own drug addiction—and his need for professional help—to Andy and Becky’s hoarding disorder.

Eventually, many neighbors were helping, too. The process was not without its difficulties, like Becky continually hiding things, even in her neighbors’ yards.

The end result was almost unbelievable: a successful cleaning, and a shift in Andy. Four days after he blamed a cop for all his problems, he told that officer, “I’m sorry for what I’ve done and said, and what I thought about you.”

He even added: “Sgt. Davis is a friend of mine”

This was also the rare Hoarders episode that ended on high note: The post-episode update revealed that 60 more tons of debris was removed after the Hoarders clean-up, and the family all took advantage of the free therapy that the show offers. They even got their dogs back.

By the end, Hoarders had made a clear case for its return, and also for being one of A&E’s best shows. Hoarding and Hoaders may not be entertaining to watch in the way that Marie Kondo can be, but that’s okay.

This is a show about mental illness, and as it effectively tells its stories, it’s doing important work with people who have hoarding disorders, with their families, and for the public.