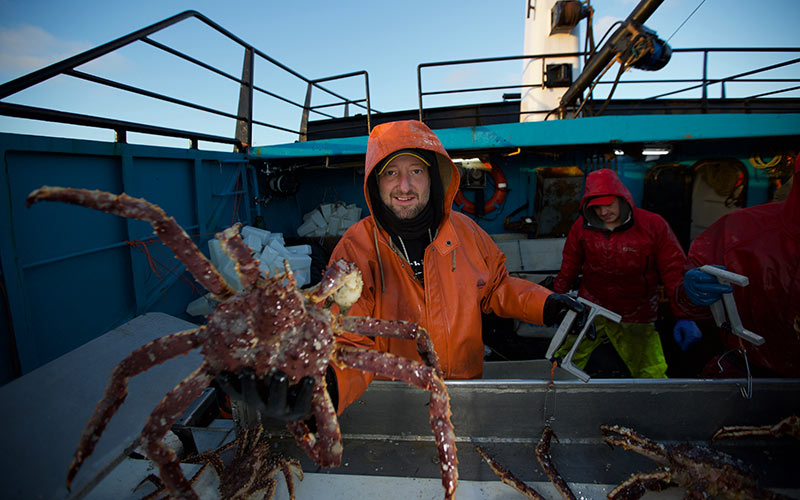 Engineer Tim Boles and deckhand Kyle Craig during Deadliest Catch season 13, aboard the Summer Bay, which returns for season 15 this year. (Photo by Discovery Channel)

Deadliest Catch will return this spring, following the same schedule it usually does, and will focus on a new crab fishing boat along with more familiar vessels, captains, and crews.

In its description of season 15, the Discovery Channel said that “this year, something is different in the air. A new boat blows into town, rumored to know where over a quarter billion dollars-worth of king crabs are located. The rest of the fleet is left on the outside willing to do anything to get in on the score.”

Also adding to the real-life drama: a “massive winter weather comes up and never really goes back down. Storm after storm causes season-ending injuries and more damage to the boats than the captains have seen in years.”

Season 15 premieres April 9, and will air Tuesdays at 9.

Discovery says it will be “an all-out battle” complicated by “weather colder than it has ever been in over half a decade, parts of the Bering Sea are beginning to freeze over along with the boats in it.”

This season, all the boats from season 14 will once again be featured, along with a new vessel.

Here are the boats, captains, and crews that were followed for Deadliest Catch season 15, along with the description of their crab-fishing activities from Discovery’s press release.

Southern Wind and the Wizard

The newest ship to be featured, and a ship that has appeared on the show since season three, are both mentioned together, to emphasize their competition:

New to the fleet this season is the cut-throat, no-nonsense Captain Steve “Harley” Davidson with the 148-foot-long Southern Wind. The boat is the second-largest in the fleet behind only Captain Keith Colburn’s boat The Wizard. Harley, who has captained the Southern Wind for 15 years, doesn’t make friends easily—including Captain Keith who considers Harley as enemy no. 1.

This season, Harley was able to break out ahead of others to look for crab. After scouring the grounds with over 1,200 pots, he believes that a quarter billion dollars-worth of crab are clustered in a single massive horde. If he’s right, every captain in the fleet will be on top of him, turning the high-stakes hunt for crab into a close-quarters battleground.

On the legendary Northwestern, Captain Sig has been preparing 23-year-old Maritime Academy alumna and daughter,Mandy Hansen, to be his relief skipper. But how will she stack up in a season of competitive close-quarters fishing?

After years of hard work, Jake Anderson has whipped the Saga into ship shape and hired a strong crew. Now, with a growing family, he wants to buy into the boat and become a partner, not just an employee. But in order to gain ownership and secure a stable future for his wife and family, Jake must fish fast enough to bring in a quarter million over expenses for the buy in.

With massive boat payments due, Captain Wild Bill has his work cut out for him on the F/V Summer Bay. With two untested greenhorns and a furry little dog named Rico, the veteran skipper has a lot to keep his eye on. It’s not long before things take an unexpected turn when one of Bill’s newbies suddenly disappears at sea.

Captain Sean Dwyer of the Brenna A has major ambitions. After his dad passed away 5 years ago, he took the helm and punched through every challenge the Bering Sea could throw at him. Now, he hopes to convince his mother and business partner that what they really need is to buy a second boat. But with Keith and Sig’s gear standing in his way, Sean must outfox the veterans or say goodbye to his dream of expanding the family business.

All eyes are on captains Josh Harris, Casey McManus and their fabled Cornelia Marie. Last season, Josh gained notoriety by skirting a series of close calls while filling the boat at a breakneck pace. Now, the young skipper must prove that last year’s success wasn’t a fluke. If he succeeds, he could be entrusted with a million bucks worth of added quota.