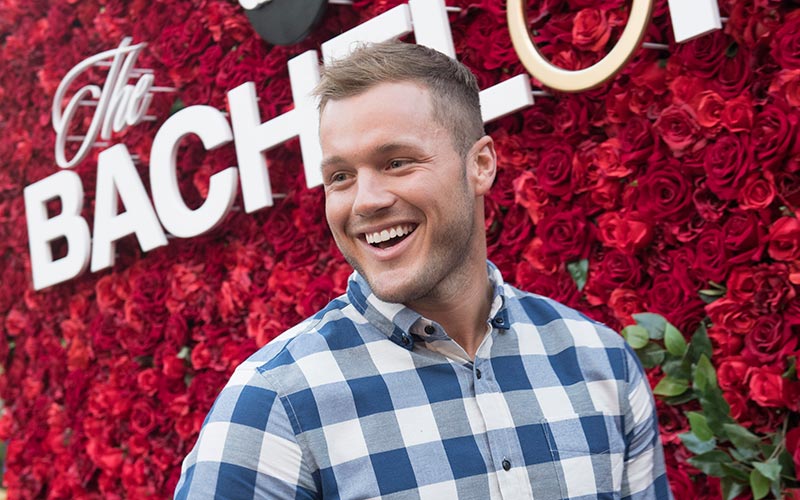 Colton Underwood at The Bachelor's rose wall at The Grove in L.A. (Photo by Aaron Poole/ABC)

The first night of the two-part Bachelor season 23 finale did not have enough content to fill its two hours, but it was frequently riveting television—and not just because Colton Underwood fled the producers, though that was wonderful.

Instead, it was fascinating because Colton refused to participate in the show’s cruelty. Imagine if ABC marketed this season around Colton’s compassion, honesty, and vulnerability instead of his virginity. Imagine if future stars of The Bachelor and Bachelorette follow his lead.

Let’s start with how terrified everyone on the production crew was that an adult decided to take a walk and be by himself. Chris Harrison even threatened to call the police! The police! Hi, I’m the host of a reality show, and our star just ran away. Also I had to run a little and I’m in the dark and I’m scared. Please send help!

Is he the villainous owner of an orphanage or a reality show host? I’m not so sure, especially since being in the moment really seemed to unnerve him. But all of this really was like the finale of The Truman Show.

“It’s not something that I ever care to go through again,” Chris Harrison said of reality. Let’s not forget how often he actively participates in the humiliation of people on this franchise, which has never unsettled him as much as filming scenes he hadn’t rehearsed first.

At least he’s good at improv, pointing out that Colton ran away in “the middle of Nowhere, Portgual,” which I’m sure the people of Algarve, Portugal—and their product integration partners at the Robinson Club Quinta da Ria, which is currently marketing a Bachelor-themed packages—really appreciated.

So yes, there is a lot of artifice and production here. But there was a lot of genuine emotion, too. Everyone was in pain, and I don’t just mean Chris Harrison having to work late at night.

Once Chris and company finally found Colton, having activated the tracker in his neck and called in a pack of specially trained hunting dogs, Colton broke down.

“Every time I put myself out there, I get fucking rejected,” he said.

“I’ve been through enough of knowing that I’m not enough for a long time,” he added through tears, “and every reminder of that just makes me stronger, so I’m okay with it.”

After Colton said that, TV Guide’s Damian Holbrook tweeted, “I hope people take away from this the realization that even people who look like Colton, who seem to have it all, can feel ‘less than.’ Self-esteem isn’t dictated by the externals.”

That wasn’t the only lesson Colton Underwood had to offer.

Although Colton was in pain, he wasn’t going to contribute to increasing others’ pain. And that’s where the show took a really interesting turn.

The Bachelor breaks with tradition

And he was: After returning to his cell for the night, he proceeded to visit both Tayshia and Hannah G. (who was ignored for the entire first hour) in their cells, and break up with them.

“In my heart, I know I can’t love two people. My heart’s with somebody else. I love Cassie,” he told Tayshia, who was upset but also took the news better than Hannah G., who still seemed hurt months later, during tonight’s live reunion.

Their feelings were a reminder, yet again, that The Bachelor can create connections between people. The pressure-cooker of the production, minus all of the stimulation of real life, plus the isolation and competition, really does equal intense emotions.

“I just like am surprised that you’re going to, like, do this to me,” Hannah G. said to Colton, who seemed even more devastated by that than the end of their relationship: “I don’t want to do this to you. This is the last thing I want to do to you.”

She doesn’t, and no one does. Yet this is far less than The Bachelor, the reality show franchise, normally requires of its star. Typically, the star has to string several people along, breaking up with them only at the very moment when they think they’re going to get engaged to be married. It makes for dramatic television, yes, but it’s also quite mean.

Over its life, the show has done much crueler things, like last season’s finale, when Arie proposed to Becca, and then changed his mind and staged a whole big breakup for the cameras. As Damian Holbrook tweeted, “This breakup is making Arie’s bullshit ambush of Becca seem even more savage and cruel.”

It’s worth remembering that the more savage and cruel, the better for the TV show, for Warner Horizon, for ABC and Disney: they need something to keep this interesting, and if Colton’s not going to fuck someone on camera, he better fuck someone over on camera.

But he didn’t. After Cassie broke up with him, he could have gone on an overnight date with Hannah G., and then strung both of them along until the finale, perhaps proposing to one only to break it off later, or breaking up with both right then.

Instead, once he realized that he was only in love with Cassie, he told Tayshia and Hannah G. That may have been painful to hear, but that was much more compassionate and honest than a star of the show has ever been.

And Colton also made it clear that doubt is massive part of this process and show. Absolute certainty—about whether to break up with someone, or to get engaged to them—is not a thing.

Relationships are complicated, especially ones in which Chris Harrison is peeking through the window trying to see if you’ve found a willing vagina into which you have inserted your penis.

“I’m trying my best. I don’t know if I’m making the right decision, but I hope that I am,” Colton said.

I suppose the show could have not filmed any of this and waved the cast’s contracts around and told them they all had to stay in give the fans the ending they want. But the episode showed us a lot, and broke the fourth wall repeatedly, which I appreciated.

After Colton left Hannah, he sat in the hallway of the hotel, crying. “Are you okay?” a producer asked, and then entered the frame and hugged him. Did she think that this would never be used? Or was she producing a moment?

Also, was she Rachel Goldberg from Unreal? I mean, just look at Rachel here and tell me that wasn’t the same person who hugged Colton:

Chris Harrison is obsessed with Colton having sex

There are still two hours left in the finale, which will end tomorrow night, apparently with Colton going to visit Cassie and get back together with her, and then more reunion and more Chris Harrison talking about Colton’s virginity.

Because this is The Bachelor and they have to make everything about 27 times more dramatic than it actually is, the show frequently cut from the scenes above back to a live studio audience, which was sitting in stunned silence.

Except: there was silence because the production muted the audio, which was obvious when they cut back to people talking but there was no sound. It was also clear when they accidentally muted Chris Harrison. (Can the person in charge of the mute button please go work on Survivor during challenges? Thank you in advance.)

While Chris Harrison made sure we realized how momentous Cassie and Colton’s actions were (“for the first time in the history of our show, the Bachelor has stopped his search for love”), he could not stop referring to Colton’s sexual behavior.

Chris Harrison, and/or someone at Warner Horizon, and/or the fine folks at ABC—a Disney company, in which I have several shares of stock back from when Disney was just a theme park—clearly thinks Colton’s virginity is the most interesting thing about him.

Chris Harrison repeatedly teased it during the finale: “And what about his virginity?” The message was clear: We brought you to Portugal to fuck on camera, so fuuuuck!

In the last segment of the two hours, Chris Harrison said this: “For the first time in Bachelor history, there are no women left on this show. And I would say things aren’t looking good for Colton losing his virginity.”

Far more interesting, though, is not what Colton has done or will do with his penis some day, but whether or not his decisions and actions will affect The Bachelor franchise, and perhaps even Bachelor Nation, if they don’t destroy him for destroying their fantasy.

Colton gave up his desire to participate in the charade, and with that, The Bachelor lost something far more interesting than his virginity: it lost control of its usual narrative arc, and lost its ability to force a contestant to just go through with all the pretense.

Will Colton’s actions reverberate? Will future stars of The Bachelor and The Bachelorette refuse to string people along once they realize who they are truly in love with?

Will people recognize that a few weeks of supervised, televised visitations is not enough time to get to know someone fully and completely? Will Chris Harrison have to keep working this hard?

In the same way the franchise embraced the ongoing soap opera, casting the same people season after season, I’m hoping it will embrace this, because this is far more interesting reality TV, and it’s also reality.