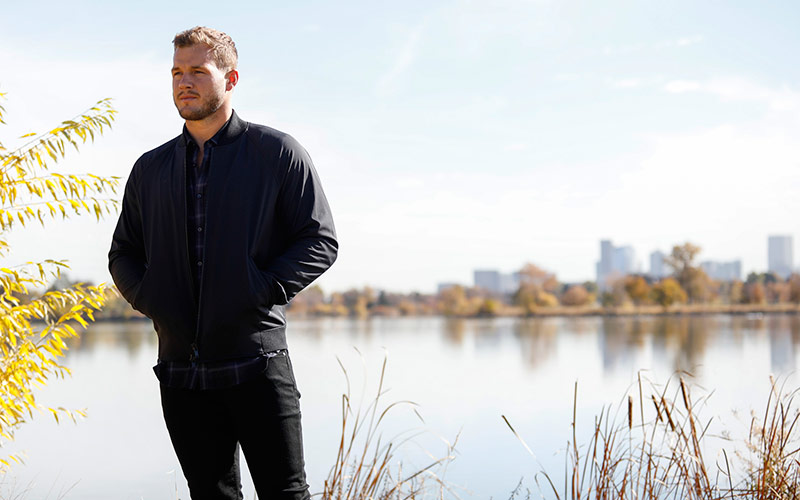 Colton Underwood, perhaps staring at the boundaries he's not allowed to cross, on The Bachelor season 23, episode 7. (Photo by Josh Vertucci/ABC)

You can’t leave, Colton. You belong here, with me. Talk to me.

That’s how I expect Chris Harrison’s conversation to go with Colton Underwoood on tonight’s finale of The Bachelor, which will resolve last week’s cliffhanger but continue tomorrow night, which ABC says will be a “stunning live conclusion to Colton’s love story.”

Those are exactly the same words spoken to another reality TV star by a producer with an inflated ego and god complex. The only difference is the star’s name.

The producers’s name was Christof, and his star was Truman, and these seven minutes tell you how their story ended.

This is, of course, the finale of The Truman Show, which was written by Andrew Niccol and directed by Peter Weir, and starred both Jim Carrey and Laura Linney.

Alas, The Bachelor host Chris Harrison isn’t as good an actor as Ed Harris, so I don’t think we’ll see such a dramatic face droop as Harris gives to his character, the producer and Truman Show creator Christof, but I’ll settle for any kind of emotion appearing on his face other than disingenuous concern.

And I expect that Bachelor Mike Fleiss’ response will be delivered from behind a screen, into which he’s furiously typing misleading tweets and trying desperately to keep people interested in his ATM of a franchise.

In the same way that the film wants us to root for Truman to step through that door, I’ll be rooting for Colton as he hides from producers who are calling for him like he’s a lost puppy.

A reality star escaping his captors is new and thrilling territory, and I can’t wait to watch it.

Meanwhile, if you have not seen The Truman Show, I highly recommend it: It’s on Netflix, or just buy the DVD for $5, because you’ll want to watch it again.

Also, read about how The Truman Show predicted reality TV’s evolution, which I wrote when the show turned 15. From its absurd product placement to the time we waste watching other people instead of living our own lives, it had a lot of warnings that we all ignored.