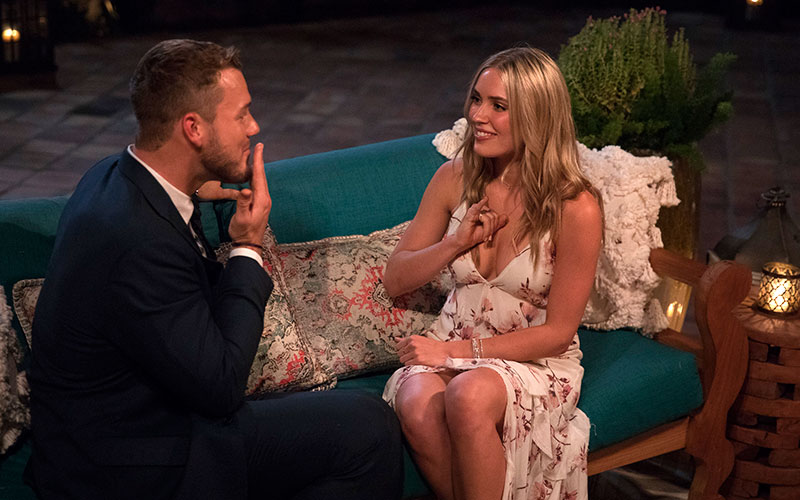 Colton Underwood and Cassie during happier times, during The Bachelor 23 season premiere, because why would ABC bother to have any photos on its press site of the episode it's been teasing all season long? (Photo by Rick Rowell/ABC)

The Bachelor took 19 hours to get to the pivotal moment of this season, when we finally saw Colton Underwood jump over a fence—and were greeted with the real surprise: it was not a fence, but a gate.

Finale recap: The Bachelor lost something far more interesting than Colton’s virginity in part one of the season finale

ABC’s synopsis of this episode called “a bombshell surprise no one saw coming.” This is, you may be surprised to learn, untrue. First, we literally saw it coming every single week, because there is more teasing in ABC’s promos than in Colton’s fantasy suites.

Second, a Bachelor fleeing the production is absolutely fun, and I’m sure the wranglers who are used to controlling human beings—which may explain why Chris Harrison and members of the crew wandered up a dark street calling Colton’s name and whistling, as if he was a lost puppy—were surprised by his exit.

But Colton’s response was reasonable and rational. And it was essentially about the show itself.

Colton said repeatedly that he wouldn’t have sex with someone he didn’t love, and then he said he loved Cassie, and then the producers made sure she really wasn’t ready to return those words.

Cassie’s dad, Matt, was flown all the way to Portugal to surprise her—in the middle of the day, before their fantasy suite date. And what a surprise it was, with a camera filming over her shoulder from inside her hotel room when there was a totally surprise knock at the door.

You may recall that, last week, Cassie’s dad Matt did not agree to sign over ownership of his daughter to Colton. (Notice that the mothers weren’t involved in any way, because in Bachelor Nation, marriage is still an exchange of property between men.)

This week, he had what seemed like a half-hour conversation with his daughter, which was totally worth all of that travel and expense.

“For me to give a blessing after a half-hour conversation with somebody isn’t really diligent,” he told her. Patriarchal nonsense aside, this is an excellent point.

Matt also pointed out the obvious to Cassie: “You seem conflicted.”

The fantasy suites date episode started with Tayshia, and a whole lot of Colton saying nothing sentences to act like he was more interested than he was. Whoever’s feeding these lines to him really should submit for a drama-writing Emmy. Just look:

Also, nice juxtaposition of “you never know what’s going to happen later” with waves crashing into the shore and creating a huge cloud of white foam.

The editing strung us along for a long, long time, but Tayshia and Colton didn’t have sex. “We didn’t have, like, the physical intimacy that I wanted,” Tayshia said, “but I got to see him for who he truly is, and it just validated my feelings for him.”

Then it was time for Cassie’s date.

First, though, now’s a good time to mention Hanna B., because the episode didn’t. Her overnight date was scheduled third and thus was essentially ignored for the entire episode. While I don’t think she’s going to get a fantasy suite date, I assume she’ll show back up during next Monday and Tuesday’s two-part, 78-hour finale.

Cassie and Colton had a long, drawn-out talk that was actually substantive, and started to get at her reservations—which were heightened when she learned her dad basically told Colton to buzz off when Colton asked for the dowry and the customary assortment of goats.

“I think spending forever with someone is, like, a really big commitment that…like is happening so quick here,” she said, with long pauses. “I’m so confused right now. I didn’t know he was not gonna—yeah. And you’re okay with that?”

Colton was okay with that, which seemed to heighten Cassie’s reservations even more. The more Cassie pulled away, the more Colton said he liked her.

Colton told us: “After today” “I just know, for sure” “I love Cassie” “point blank.” I put quotation marks around each phrase because it seemed like those all came from different sentences, as the audio levels changed between each phrase.

But later that night, Colton found out those feelings weren’t shared. “I would hate to see you—I don’t want to see you leave here not having what you came here for,” Cassie told Colton.

Colton said, “But if it’s not with the person at the end of this that I feel the strongest for and the most potential with, then it’s not worth it.”

“I don’t know why I’m so confused,” Cassie said later.

You’re confused, Cassie, because this is not normal, and confusion is entirely normal. Neither of them said, however, that the show and its constraints were to blame for their consternation.

“You were the person I was most excited to be with every single time,” Colton told Cassie. And to make it clear: “I’m telling you right now, at the end of this, I want it to be you. I want to be with you. I love you.”

That was a real sentence, not created in editing, and Colton’s feelings seemed very real. His shaking, which was made audible from the mic he was wearing, was a physical representation of how distraught he was.

What was fascinating about this was that he was not playing The Bachelor game, which requires him to wait until the final episode before he says anything like that. Doing so allows the show to string two women along and leave them emotionally devastated, which is great for ratings and makes viewers feel good about themselves.

But Colton didn’t want to do that, so instead he gave a marvelous middle finger to the producers and their format.

A Bachelor finally runs away

As things escalated, Cassie got up and walked away. You know things are dramatic on The Bachelor when a camera operator has to lift a camera off a tripod and follow someone. Reality is so much more challenging than planned scenes!

Eventually they said goodbye, though not after even more tedium, like at least 45 minutes of them walking across the lawn. I am very impressed with the attention spans of people who have watched all 19 hours of this, because I had to start assembling my new leaf blower in the middle of it because I was so bored. I appreciate a slow reality series, but The Bachelor is at least twice as long as it actually needs to be. (Take note, Jeff Probst!)

Only in the final few moments was there any action.

“Fuck all of this. I’m done. I’m done with this,” Colton said, exiting his room and pushing the camera lens as he walked by. Then he pulled off his mic and hopped over the fence—I mean, gate.

“Somebody get Chris,” somebody pretended to say into a radio during post-production.

Host and resident bro Chris Harrison emerged, and narrated what we’d just seen: “He just jumped the fucking fence,” Chris said. Then he asked, “Is there a button that opens the gate?” Chris was not jumping over a fence/gate. He may be an executive producer, but he does not do stunts.

Chris ran up the street because he knew that would make this seem especially urgent and dramatic. I’ll give him credit, though: You could barely see his disingenuousness this time.

So what happened, exactly? This is The Bachelor, so we have to wait—or just read Reality Steve’s spoilers. Or just pay close attention to what Colton is doing in public, which seems to reveal the ultimate outcome.

There are two likely options: Colton can go back, have his date with Hannah G., spend more time saying nothing about Tayshia, and propose to either or neither of them.

Or the show will just end here: The woman he loves doesn’t love him back, so he won’t go through the charade. I hope that’s what happens, because that’d be following reality, not forcing it.

Either way, in rejecting Colton, Cassie broke with tradition. On this show, the women are expected to just hang around and be available for whatever the man wants. She didn’t want that, and so she left.

Colton appears to have done the same.

The stars of The Bachelor and The Bachelorette are expected to drag their suitors along, even if they already have a strong sense of who they’re actually interested in. There’s no show if there aren’t multiple people to date.

The format literally traps people for a month or so, and gives them limited contact that’s entirely mediated by producers and happens only while there are camera crews and lights and PAs and mics.

Then it asks them to make a life-long commitment to each other. Again, this is completely nuts. All of these people are in their 20s. What exactly is the rush? I mean, besides to produce a profitable season of a reality show. (How this machine has produced any lasting relationships is an absolute miracle.)

Why it took this long for someone to basically say, on camera, This is crazy! No thanks! is the only real surprise of The Bachelor season 23. But it’s also a thrilling turn of events that could pop the fantasy bubble for both viewers and the cast.

Read next: In its season finale, The Bachelor lost something far more interesting than Colton’s virginity