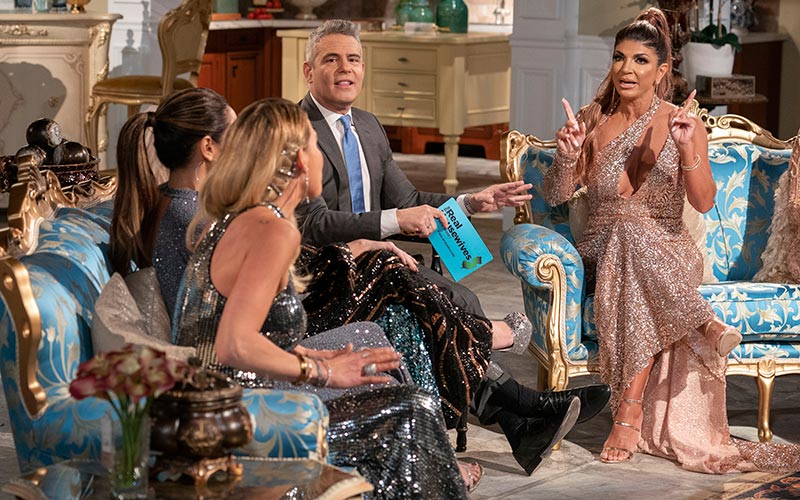 The world's most ineffective moderator, Andy Cohen, with Teresa Giudice on The Real Housewives of New Jersey season 9 reunion. (Photo by Greg Endries/Bravo)

Good Monday morning, day four of our national emergency here in the United States (or day 759, I suppose). I hope you have enough supplies and haven’t eaten your way through the Cheez Balls yet like I have, and that you haven’t had to wait too long for your omelets.

While not many reality TV shows are premiering this week—a week that ends with the televised fiasco known as the Oscars—there are two big debuts, including Survivor and an Oscar-nominated documentary.

The biggest reality TV event of the week will be on Wednesday, the return of Survivor for season 38.

Tangent: Can you believe we’re just one year away from season 40? Amazing.

Anyway, Survivor Edge of Extinction will be in its normal timeslot (CBS, Wednesdays at 8), followed by CBS’s ham-fisted attempt at an AGT knock-off, The World’s Best, which has previously been airing in Survivor’s timeslot. (The actual America’s Got Talent has the finale of its “Champions” spin-off Monday at 8. This will be the last episode with the current judging panel, as half of them are leaving.

While I am very, very concerned about this new twist, especially since it’s been paired with four returnees, I was also concerned about last season’s theme, and an excellent cast, strong game play, and vastly improved editing made it one of the best seasons ever.

By the way, I shared my anxieties—and how I hope I’m proved wrong once again—on On the Island, a podcast about Survivor. Listen here!

Other reality TV premieres this week

Few TV shows give me as much joy as At Home with Amy Sedaris, and that’s why I’m leading with its return, even though it’s not a reality series at all. It does, however, parody a certain kind of unscripted TV.

Season two (truTV, Tuesdays at 10) will be more narrative and less how-to, Amy told TV critics at the TCAs last week, but having already seen one episode, I can promise that it’s still bizarre and hilarious.

Speaking of satire: The meticulous, lovingly crafted documentary parodies of Documentary Now! are back (IFC, Wednesdays at 11), starting with a take on Netflix’s Wild, Wild Country.

Okay on to actual reality TV!

On Thursday, MTV imports a dating reality series from the UK, but gives it an MTV twist. On Game of Clones (MTV, Thursdays at 9), MTV reality stars will date seven people who’ve all been styled to look exactly like a celebrity that person has a crush on. (I’d recommend watching this dating reality series instead.)

Chef’s Table has more episodes on their way (Netflix, Friday), while Dr. Susan Kelleher and her staff return for another season of Dr. K’s Exotic Animal ER (NatGeo WILD, Sundays at 9).

Also returning are Hollywood Medium with Tyler Henry (E!, Thursdays at 10), as he pretends to talk to dead people, and Ghost Adventures (Travel Channel, Saturdays at 9), on which Zak Bagans and crew talk to people about their alleged encounters with ghosts.

An Oscar-nominated documentary, a walk through the Grand Canyon, and other documentaries

One of the documentaries competing for an Oscar on Sunday is Minding the Gap, which was filmed over 12 years by director Bing Liu, and follows him and his two friends as they grow up.

It’s currently on Hulu, and tonight it will be on TV as part of PBS’ doc series POV (PBS, Monday, Feb. 18, at 9, but check your local listings).

Other documentaries airing this week:

United Skates (HBO, Monday, Feb. 18, at 8) “spotlights a community of thousands who fight in a racially charged environment to save the underground African-American subculture of roller skating, which has been overlooked by the mainstream for generations, while giving rise to great musical talents,” according to HBO.

Sammy Davis, Jr.: I’ve Gotta Be Me (PBS, Tuesday, Feb. 19, at 9) is American Masters’ look at the performer—and is “the first major film documentary to examine Davis’ vast talent and his journey for identity through the shifting tides of civil rights and racial progress during 20th century America,” according to PBS.

Into the Grand Canyon (National Geographic Channel, Thursday, Feb. 21, at 8) follows two men as they walk the Grand Canyon’s 750 miles. NatGeo says it “is a story of extreme physical hardship that stretches the bonds of friendship and a meditation on the timeless beauty of this sacred place” and also “an urgent warning about the environmental dangers that are placing one of America’s greatest monuments in peril.”

Correction: This story has been updated to correct the time for At Home with Amy Sedaris, which initially had the show’s old timeslot listed. Apologies for the error.