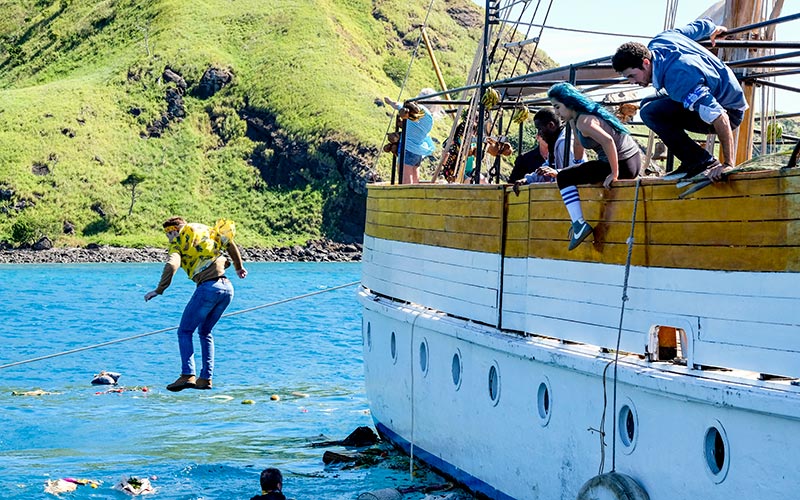 Survivor Edge of Extinction cast members jump off of the Ra Marama at the start of season 38. (Photo by Timothy Kuratek/CBS Entertainment)

Survivor Edge of Extinction, the 38th season of the CBS reality competition, begins tonight and introduces a major twist into the game, one that will potentially keep every single person in play until the finale.

Whether that twist works or doesn’t, and whether or not this season is as amazing as last season, one thing is undeniable: creating Survivor requires a lot of work.

Entertainment Weekly’s Dalton Ross used his time on location to report on a single scene: the marooning, when the contestants are greeted by Jeff Probst and then sent off to their tribe beaches.

The story spans just under nine hours: from a 2:45 a.m. wake-up call for the contestants to the 11:39 a.m. start of production.

But it’s more than 10,000 words long, because it goes into incredible detail about so many of the individual moving parts that come together, and that includes “34 different boats carrying 714 bodies over a total of 1,500 miles.”

And all of the work is for just a few minutes of television on one episode. So many of those details are ones that may never end up on screen, and others are things that are easy to take for granted.

But that level of attention to detail and craft is something I will always appreciate about Survivor, even when I don’t appreciate its twists or its decisions.

Last year, on a podcast, Jeff Probst went into a lot of detail about how the show is produced, and addressed some bigger-picture things, like why the show stays in Fiji and debating with CBS about the theme and the use of GoPros. (Read that story.)

Dalton’s piece goes into even finer-grained detail, and ends up profiling several people, including coordinating field producer Riley Munday, who began her work on Survivor show when she was 18, and was on the Dream Team for Survivor Pearl Islands.

He describes her as being “the nerve center of the show, coordinating between multiple departments to make sure everything is on track.”

Another key member of the crew, prop master Lucas Faganely, also started on the Dream Team, for Survivor Nicaragua. In the dark, he and his team will load the boat up with fruits, vegetables, and other crates—and he’ll also hide three secret advantages on the boat.

Speaking of hiding things, we also learn who is responsible for hiding idols: supervising producer Jimmy Quigley, who, for episode one, won’t hide an advantage until he learns which tribe has found the clue to the advantage. (In other words, the other tribe won’t have an equivalent advantage hidden in their camp that they could accidentally stumble across.)

It’s clear from the story how much preparation is required, but there are also last-minute complications that create more work. This season, the crew had to replace the boat used during the marooning at the last minute—and the replacement, Ra Marama, was the same boat used during Game Changers and Heroes vs. Healers vs. Hustlers.

Part of all the planning that goes into Survivor involves erasing the effort that we learn about in this story. Some of the last-minute tweaks Dalton describe include a barge that “had drifted into a camera shot, forcing four safety divers into the water to secure four 100-pound anchors to help reposition it” while “grips had to chop off a canopy support pole that was in a camera shot.”

A considerable amount of time is spent filming “portraits,” or the close-up shots we see of each contestant as they’re introduced in the opening moments above. That’s just one of those things that looks so quick and easy on TV, but requires so much coordination—including to figure out wind direction, which will affect travel time.

A few other fascinating things:

All of that and more is in Dalton’s thoroughly reported, completely fascinating piece, which you should read right now: All hands on deck: Behind the scenes of a Survivor marooning