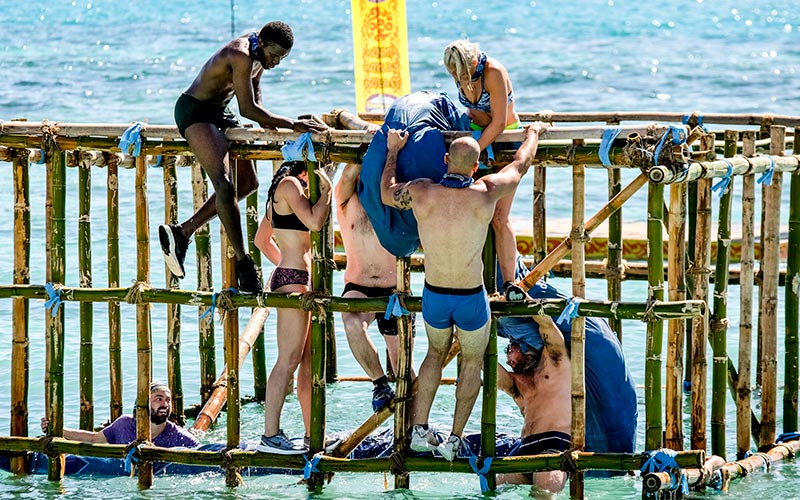 The second episode of Survivor: Edge of Extinction﻿ got its title, “One of Us is Going to Win the War,” from something Kelley Wentworth said about her conflict with Wendy.

But there was no war between them, or anyone else, really. There was no targeting of returnees despite their ability to Rob Mariano this season—though there was a glimmer of hope. Instead, this episode kicked all of the drama to the next episode.

Instead of a blindside, there was just an easy vote: targeting Keith because he wasn’t the best in the challenge.

Blaming him for their loss was a stretch; although he’s a slower swimmer, the tribe caught up completely and was even with Kama at the final stage. And though he missed some ring tosses, so, too, did the other ring-throwers. Everyone’s sure going to a lot of effort to make sure there’s a REASON why none of the white men are even being considered for votes.

They’re even doing some hilarious mental gymnastics, like Wardog arguing that Kelley Wentworth should stay because there may be a tribe swap. Isn’t that the reason to vote her out right now? And if you’re aware of the possibility of a tribe swap, Keith is not your biggest threat. We must keep the tribe strong! So it can be split apart and the strong people can end up on other tribes!

And if you need to hear that from someone other than me, here’s Kelley Wentworth on voting out Keith: “It’s stupid. I don’t know what he’s thinking. Yeah, Keith failed miserably, but he’s not a threat.”

The returnees are at least being considered—I mean, the female returnees, not the men, who are perfectly safe.

Kelley re-emerged as a target, first with a smaller alliance considering it but dropping it because they didn’t have the numbers, and then again when Chris approached Rick.

Funny how attractive the idea suddenly became when it was Chris’ idea, even though it was actually Wendy’s idea first.

There was a five-person block who could have voted out Kelley— Chris, Rick, David, Keith, and Wendy—and it seemed like they were serious.

Before Tribal Council, Kelley said in an interview, “People are acting very strange, and it’s making me nervous.” She also added: “I would vote me out.”

But they didn’t. Why? That was concealed for our entertainment.

Kumbaya Survivor yields a dance party and an Aubry montage

Aubry gave some fascinating insight into her preferences and frustrations:

“I hate kumbaya Survivor. It’s the worst. I like going to Tribal first when I play Survivor because you see immediately where the lines are, and you know how to work with it.”

Without a first Tribal, she said, “You don’t really know what the hell is going on.” So she talked to everyone on her tribe. Her attempts to ingratiate herself were shown in a montage that was both hilarious and brutal, as she talked about wanting to start “dialogue” and saying players “remind me” of herself.

I appreciate that she wants to play, and I share her frustration, especially since the tribe that has gone to Tribal hasn’t wanted to do anything strategic at all.

But I also kind of love kumbaya Survivor, especially when it results in dance numbers. The only flash of the fun of last season’s Survivor has been the yellow tribe’s camaraderie.

Aubry’s montage made me wonder how often, especially in early the early days of the game, that players say similar things to each other. But the suggestion here was clear: Aubry is not only frustrated with her tribe’s lack of movement, but she’s also ineffective with her attempts to bond and form alliances.

Her tribe is effective at winning challenges, though, and the one they competed in is one she’d played before. (There’s another issue with seasons where just a few returnees come back: the show’s tendency to reuse challenges gives them yet another advantage, especially at the individual immunity stage. They’ve had practice.)

The challenge involved freeing a large snake from a cage, and I suspect it came back just because Jeff Probst exhausted all of his ball jokes last season and needed to move on to another body part for his challenge double entendre.

An idol, found by an idol’s idolizer

I bring that up because it’s interesting that this cast, too, had open discussions about the disparity between how many idols are found by men and women. (Perhaps all casts talk about it and it’s only been shown this season and last.)

There was a particularly fascinating moment when Julie and Victoria were talking about how, as Julie said, the men were “gone for a long time,” and Victoria concluded, “We need to be babysitting more.”

Julie said, “No, we need to be looking!”

Later, in an interview, Julie said, “we’re sitting here chitchatting” instead of searching, and noted how “the women and men do fall into these preconceived roles. I don’t know if it’s about living this primitive lifestyle.” That’s definitely one of the theories.

She also said she was averse to searching because “I’m not a sneaky person and it feels sneaky to me.” And Victoria told us that idol hunts seemed challenging because “it’s a big place.”

Meanwhile, Lauren talked about how Parvati and Kelley Wentworth “were my role models. They were my survivor queens” because “they were bad-asses.”

And then she became a bad-ass herself by finding a hidden immunity idol. There it was, some blue fabric poking out of a downed tree.

Finding it while on the same tribe as Kelley Wentworth “makes it astronomically more exciting,” Lauren said—and then she did the best thing ever. Instead of showing it to other people, she hid it, hiding it away for another day.

On whatever we are calling the Edge of Extinction island, Reem was frustrated by the lack of information: “What? There’s no timeline on this?”

She can probably assume she’ll be given the chance to win her way back into the game, but having that be so open-ended must be frustrating, especially being alone with her machete, flint, and shipwreck set design.

Will she be joined by Keith? The editing kicked that decision down the road to next episode, because they definitely wanted to make sure nothing of interest happened in this episode.

Gordon Holmes surveyed past players about whether or not they’d choose to stay in the game, and the collective response was basically: Fuck yes, duh.

I suspect there may be one or two people who say no—people who’ve been emotionally and/or physically wrecked by the game and are just done. Keith could fall into that category.

We left Keith standing at the point of decision, where he stood and alternately asked God and Jesus for a message. What are the chances that one of them appears with some advice for Keith and the production is holding that reveal for next episode?