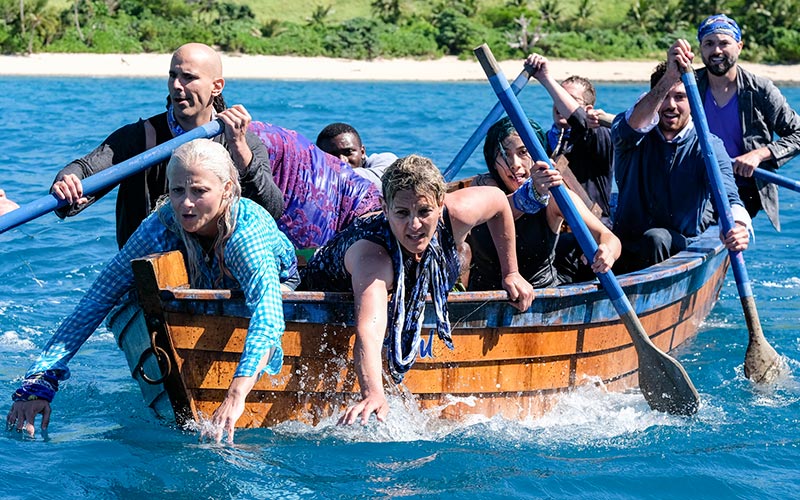 The Manu tribe paddles toward their new beach on the premiere of Survivor Edge of Extinction. (Photo by Timothy Kuratek/CBS Entertainment )

“Any little thing can send you out of this game,” returning player Kelley Wentworth said during the premiere of Survivor: Edge of Extinction.

But what if that “little thing” is being different? Like, say, being the oldest person in the game? What about being the only black person on your tribe who also can’t swim, or being a woman who also has Tourette syndrome?

Because what the Manu tribe did was to use those differences as their rationale for targeting those three people.

Oh sure, they wrapped it in poor attempts at excuses: things like “strength” and their annoyance that someone would lay their clothes out to dry. It’s so lazy for them to point fingers at the people who are externally, obviously different and then declare them unfit to be around everyone else.

In case it wasn’t clear they were being targeted for their differences, Rick spelled it out for us:

“We saw that Keith wasn’t a great swimmer, Wendy is a whirling dervish, and Reem’s a busybody. So it’s been really helpful for the rest of us in the tribe because we’re sitting there going, Wow, those three have divided themselves, and those might be the three we wanted to vote out anyway. So okay, keep dividing yourselves.“

Let’s unpack that, shall we? Wendy, who has Tourette syndrome, is a “whirling dervish”? And Reem, the oldest woman on this season, gets tagged with a dismissive, ancient label because she dared to, uh, try to be helpful?

And notice how Rick 1) identifies their differences and then 2) blames them for being different, even though the differences he’s identifying seem like thinly veiled labels for who they are as people (an older woman, a person with Tourette syndrome).

Oh, and both Wendy and Reem had the gall to try to help Keith learn to swim, probably without asking the men’s permission to use the ocean first. What nerve! (That scene was heartwarming, but also: How do you go on Survivor without learning to swim first?)

Look: You don’t want to stand out on the first episode of Survivor. And as we’ve seen time and time again, people can’t help but be themselves. But if we’re going to go by annoyingness, Reem was nowhere near the most annoying person on her tribe, and certainly doesn’t rise to the level of other first boots who barged in and tried to run camp and the game seconds after meeting everyone else.

So why vote her out? As Reem said at a Tribal Council that seemed to be a waste of time because she was going home regardless, “I’m going with age discrimination, to be quite honest with you. Because how would you know if I wasn’t strong or not strong? Do we need to have like a wrestling competition here?”

No, we don’t, because it was quite obvious, at least to me. How could they target Reem before a person who can’t swim and pretend that their vote was about “strength” or challenge wins? How can they have a problem with three people practicing swimming when a returnee immediately creates a visible two-person alliance (Kelley + Lauren)?

And in case it isn’t obvious that there was a heaping pile of sexism being squeezed out all over that beach along with the ageism, let’s cut to Wardog saying, “I just don’t want to hear, like, a motherly figure out there.”

Or cut to Wardog and David talking to Wendy about voting out Reem, and Wendy saying basically, Okay, sure, I get it.

That prompted Wardog to say “maybe we just take Wendy out.” Why? Because “she’s too stubborn” and “she pushed back.” SHE AGREED WITH YOU, FOR FUCK’S SAKE.

Coming off the high of last season, I was ready to be enchanted by Survivor again. But this dynamic did not offer an encouraging start.

It’s just repeating ugly patterns that we’ve seen season after season. Even if it’s a mirror of our sexist and patriarchal society, it’s also reinforcing that behavior, and even worse, potentially giving viewers (thin, unfounded) rationale for their prejudices.

Meanwhile, the first hour itself lacked the full character development and witty editing of last season—though a one-hour premiere doesn’t have enough time to flesh out all of the cast, so it’s hard to compare it directly to David vs. Goliath’s 90-minute debut. (It was nice to have the extended opening sequence, about 15 minutes before a commercial break.)

Still, I already miss last season’s cast, and the wit and joy that was present in the editing. The interaction was ugly enough that it seems like it’s setting itself up to be a rerun of Survivor Worlds Apart, which I do not want to watch ever again.

As Linda Holmes tweeted, “Too much of this cast seems made up of jerks, frankly,” and “This is just unpleasant people grasping their petty power.”

And that can easily overpower everything else that’s likable about Survivor, such as all of the attention to detail and effort that went into fewer than seven minutes of television (read about what happens behind the scenes before the marooning).

Reem gets a second chance and Joe wins a challenge

Oddly, the flash of hope was the second chance that Reem now has as the first resident of Extinction Island, Isle of Extinction, The Medium Place, or whatever we’re calling it.

Her discovery of that twist and her journey there, only to find it abandoned, was beautifully crafted and genuinely intriguing. (Also beautifully crafted: the Tribal Council set. They have been pretty exceptional in recent seasons, but this boat-on-its-side set is a new level.)

I’m still not sold on Extinction Island as anything other than a mechanism to keep the four returnees as long as possible and give one of them a chance to win. Had it appeared in a non-returnee season, I’d be a lot more invested.

Speaking of Joe, he won the first immunity challenge, which was a series of obstacles that he basically did by himself.

Meanwhile, Ron found an advantage hidden on the boat (there were others, including a crate of canned goods under a buoy, but apparently no one saw those?), which required the immense physical challenge of sifting through a bit of sand, which was so exhausting he fell over after digging it up.

What he got was an “Advantage Menu”: a choice between a steal the reward advantage (playing this might would make your tribe happy, but doesn’t guarantee much else), an extra vote (potentially useful), or individual immunity (take that one, duh). It’s only good until after the third tribal goes away.

If we’re going to keep the avalanche of advantages, I like the idea of choices. And the expiration date is also nice, too.

Unfortunately, this season is not one that will be expiring much of anything, since it’s keeping everyone around. While I’m not encouraged by the Manu Tribe’s behavior, it’s even worse that we won’t really get to see anyone’s comeuppance since they’ll just linger after being voted out.

In the preview and in brief moments during the premiere, there were flashes of potentially interesting moves: David turning on Kelley, Gavin and Eric wanting to go after Aubry…

…oh wait, what do those things have in common? Ugh.