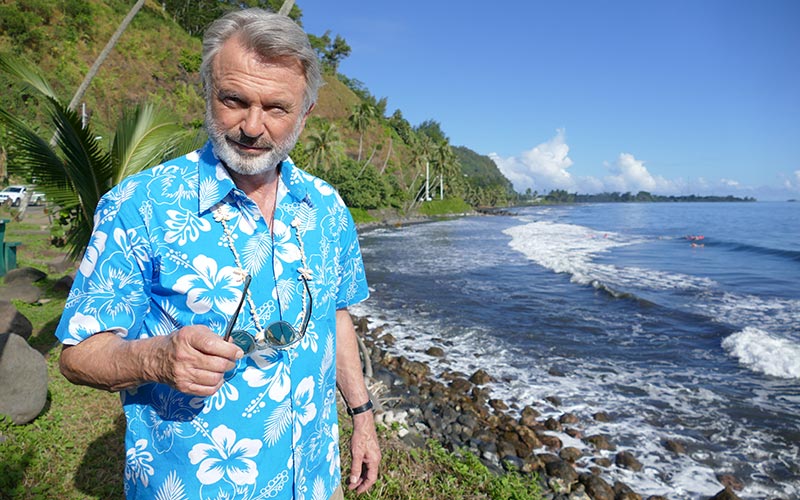 Sam Neill follows Captain Cook's path on The Pacific: In the Wake Of Captain Cook. (Photo via Ovation)

The actor Sam Neill has been in many, many films, from his role as Dr. Grant in Jurassic Park to his memorable cameo in Thor: Ragnarok. But, as he told me earlier this week, “I started off in documentaries, and I was directing and cutting and writing documentaries for seven years before I became a full-time actor.”

He’s returning to documentaries for The Pacific: In the Wake of Captain Cook, a show that aired last year in New Zealand and Australia, and is coming to the U.S. tonight (Ovation, Thursdays at 10).

On the six episode series, Sam Neill follows the path of James Cook’s exploration, following his path 250 years later. Cook’s wake includes colonialism, and the narrative that Cook somehow discovered places that were already inhabited by thriving cultures that were often erased by what followed.

The Pacific gives attention to Cook’s voyage, but although his name is in the title, the episode of the series I’ve seen centers and focuses on the ancestors of people that Cook encountered.

In one scene, Matahi Tutavae, of the Tahitian Voyaging Society, says, “I have to tell you, I hate when I see documentaries or films—or even in books—saying that the first discoverers of Tahiti were European, as if our ancestors weren’t there, or they’re just part of the fauna and flora.”

In another scene from the premiere, Moetai Brotherson tells Neill, “Part of what was lost, we don’t even know about it, because it was lost forever. The traditions, the religion, the cults, the place we’re sitting in…”

Sam Neill says, “So this was a sacred place and now it’s covered in Toyotas and Peugeots.”

‘My job … was listening’

In talking to people, Sam Neill told me that had a clear mission. “My job, as much as it was talking on this, was listening. It was really important to listen carefully,” he said.

There was, of course, much more filmed for the show than makes it into each episode.

“One of the regrets about doing a series like this is, you might do a half an hour interview and it’s cut down to, say, a minute—which is heartbreaking, really. And I had so many stories that were really funny, often very moving, that would reduce me to tears, and a lot of that is missing from the series,” he said.

That’s why there are extended interviews on the show’s web site, so the full stories are available.

Sam Neill felt similar restraints on location. “There’s never enough time. That’s one of the frustrating things,” he told me. “There are always budgetary restraints. Sometimes I would fly myself in a few days before we went to, say, Tahiti, and have a few days on my own, at my own expense, before the crew turned up. And those were invaluable. I already had a much clearer idea of where I wanted to go and where I wanted to take it, by the time I got there. But sometimes we were really flying by the seat of our pants.”

When he was filming—either an interview or a more cinéma vérité moment of just walking around a place—Neill said, “I was prepared but I was always open to what might happen.

Sam Neill said his exploration, narration, and interviews are assisted by a team of “really good researchers and a couple of writers,” he said, though he was actively involved. “Every night … I would rewrite those to something that sounded like me speaking,” he said.

Narrating and interviewing is “an entirely different skill” from acting, Sam told me. “In this, I’m at least a version of myself. There was some bits that were so simple and straightforward to do; some people were so charming and funny and great to be with that I just enjoyed their company.”

The crew spent about three weeks at locations followed by a three-week break. “I really effectively put a year aside for this,” he said.

That took him all over the Pacific Ocean, and involved more than Cook’s experiences, including a trip to Antarctica and an encounter in Tonga. “I swam with whales, for instance, in Tonga. And that was an extraordinary experience—just me and a guide and a blue whale, which is doing backflips underwater, just showing off and playing with us, and a huge flipper the size of an airplane wing just coming past you at a matter of inches away from your face. A beast that could easily kill you but was just happy to play around in our company,” he said.

‘I don’t think we’ve given any real offense’

In the first episode, Sam Neill acknowledges that he’s not an expert. “I’m in no position to preach or sound definitive about anything,” he told me.

That may be one reason why the reception to the show has not been as controversial as he expected.

“I thought it would be more contentious than it is,” Neill told me. “There are a lot of Cook haters in the Pacific, and there are a lot of Cook fans, enthusiasts. And I thought we would fall out with both of them, but I think we take a very balanced view of things—that was the intention. And I think it’s been a good learning experience for a lot of people, things they didn’t know, or hadn’t considered. I don’t think we’ve given any real offense to anyone in particular.”

“I think it’s fair to say that first contact is never a happy experience,” he said. “Cook was remarkable in that he conducted these three epic voyages, his crew loved him, he made some mistakes, there were some deaths—which he wanted to avoid, but they happened. But at the end of the day, it’s a great adventure.”

“There’s a 10-year-old boy in me that would have loved to have been on those ships myself, you know,” Sam Neill added. “It’s a very personal journey.”