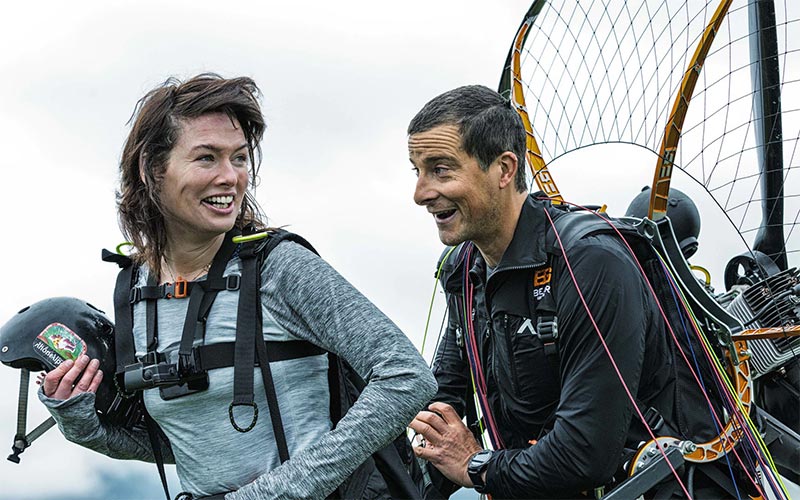 The reality show that follows Bear Grylls and a celebrity on an overnight adventure, Running Wild with Bear Grylls, will return for season five, but on a new network: National Geographic.

This represents a return to more conventional reality TV for National Geographic, which is also doubling down on Bear Grylls.

He’s the narrator of Hostile Planet, NatGeo’s entry into the natural history space. (That show premieres April 1—days before Netflix premieres its series, Our Planet, which comes from the Planet Earth team and is, like all of those shows, narrated by David Attenborough.)

NatGeo said Running Wild with Bear Grylls season five “is currently in production and slated to premiere in December 2019.” A NatGeo press release described the new season like this:

“The new season, which includes a new celebrity lineup of adventurers, will transport viewers across remote locations in the US and around the world, including the jagged cliffs of Sardinia; a massive glacier in Iceland; the deep jungles and remote islands of Panama; and the deserts and canyons of Utah. These celebrities will push  beyond their limits to see if they can endure the harsh wilderness in their high-octane, action-based, fear-tackling journeys. The intrepid cast members will face their deepest fears and tackle everything from wild animals to rock repelling as they will journey through some of the world’s most unforgiving wildernesses.”

“Bear is the perfect fit National Geographic, and we’re fortunate that he’s not only the face of the upcoming Hostile Planet, but that he’s also brought home his high-adrenaline series Running Wild with Bear Grylls.  This season has the DNA to be the most action packed one yet with bigger and bolder physical challenges, more of Bear’s totally innovative, spur-of-the-moment survival tricks and plenty of gut-wrenching and unforgettable field-inspired ‘dining’ experiences. In addition, we’re creating the most visually immersive, exotic, harrowing and downright beautiful looking season to date.”

Running Wild runs away from NBC

Running Wild premiered in 2014, with Bear Grylls taking Zac Efron on an overnight trip in the Catskill Mountains. Over its four NBC seasons, it had stars including Michelle Rodriguez, Michael B. Jordan, Courteney Cox, Nick Jonas, Sterling K. Brown, and Julia Roberts.

And one episode featured Bear with President Barack Obama, though it wasn’t a true episode of Running Wild, though it was still weird to see the president on reality TV.

During its fourth season last summer, NBC moved the show from Mondays at 10 to Mondays at 8, and then burned off its last two episodes, with Uzo Adub and Roger Federer, on Sundays at 7. That move suggested NBC was done with it.

Its ratings hovered around three million viewers per episode, although they dropped significantly for the last two, as would be expected for a move to a pre-primetime timeslot.

In 2017, National Geographic acquired the syndication rights to the show for the first three seasons, with options to also broadcast future seasons, if NBC renewed it.

In a press release, Bear said:

“I’m so proud to have joined the National Geographic family, whose brand is synonymous with adventure. Sharing an epic wilderness journey with these world-renowned celebrities and getting to know the human side of them along the way is the magic of this show. Ultimately, we aim to inspire people to break free from their comfort zones and embrace the adventurous spirit that we all possess.”