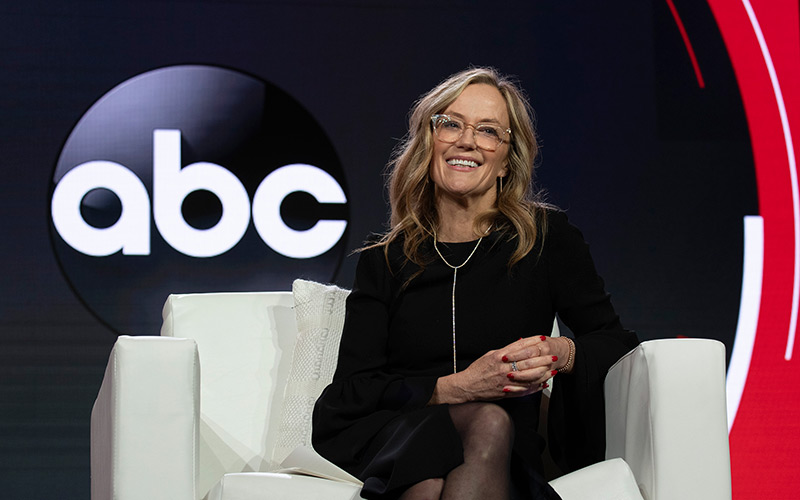 ABC has a new entertainment president, Karey Burke, and she’s a fan of its biggest reality franchise, The Bachelor—and she’s convinced its producers “[have] done a remarkable job” holding themselves to “ethical standards,” and also said “I do believe that the people that go on the show are looking for love.”

Along with renewing Shark Tank for its 11th season, ABC renewed Bachelor in Paradise for its sixth season, which will air this summer.

Burke referenced that renewal in her opening remarks at the Television Critics Association winter press tour today, and immediately made it clear that she’s a fan:

“We’ve also announced another season of Bachelor in Paradise and the season finale planned for The Bachelor, which has been just killing it on Monday nights.

I have to say, when I got this job, the thing that my teenagers were the most excited about was that they might get to visit the mansion. They will not. Here’s a picture of the viewing party that happens at my house literally every Monday night. Mother of the Year, I am not.

But we love the show, and I got to meet Colton this morning. I had my picture taken with him. So I am going to be in good standing when I get home tonight.”

Considering she watches it with her family and is now the person ultimately responsible for its production, I was curious about the kind of standards she’ll hold it to, and whether she has concerns.

Andy Dehnart: “Karey, it sounds like you have a lot of affection for The Bachelor and the franchise. What kind of ethical standards do you hold the show to now—as the person in charge of it—in terms of how it treats people and turns them into soapy ABC entertainment?”

Karey Burke: I think the show has done a remarkable job over its many seasons of, you know, taking care of their own ethical standards.

I actually was pleased to see last week’s episode in which the young woman Caelynn really spoke her truth about her sexual assault. That was a place the show hadn’t gone before, that I felt was really powerful and important. It sparked a really compelling conversation in my house.

And as I like to say about The Bachelor, my daughters started watching it in their teen years, and I said, You know, I hadn’t been watching it till three or four years ago. As a feminist, how can I allow my children to watch this?

I sat down and watched it with them, and I realized if you don’t think those women have power, then you aren’t watching the show correctly. Those women have a lot of power, and they are using it well. And I think it is some of the best storytelling on television, and I think people watch it with an eye towards that, that this is some great storytelling.”

Andy Dehnart: “But it’s the people who are producing it who have all the power, right? So they’re the ones shaping it. I’m just curious if you care what they’re doing to people.”

Karey Burke: “I do care. But I think if you I have come to know some of the former Bachelors and Bachelorettes in this job and in my role at Freeform, and I think they would tell you to a person that the experience was phenomenal for them.

It’s been life-changing for many of the people on the shows. There are many, many relationships and children that have come out of the show.

And I do believe that the people that go on the show are looking for love.”

These answers sound to more like someone who watches as a fan, not as a network executive in charge of the production.

That’s for a good reason: She’s a fan! That’s okay! Also, Burke is new to the job—just two months, as she mentioned during her press conference. But it’s also all too familiar a response from an ABC entertainment president.

I hope that she learns more about how her biggest reality franchise is produced, and what happens behind the scenes.

Why Bachelor Nation‘s author broke up with the show

There are other questions I wish I’d asked Karey Burke, such as if she’d commit to casting a black Bachelor.

I also wish I’d asked if she’d read Amy Kaufman’s book Bachelor Nation—which happens to be out in paperback today (coincidence!) and explores

Speaking of the book, which I highly recommend, Kaufman wrote an open letter to the franchise as part of the paperback. It says, in part:

“I was mad that you made the Bachelorette—and by proxy, me—believe that these were guys who were safe to hang out with and crush on. I get that you can never know the full extent of someone’s background, but I know how much effort you put into thinking about how hot someone will look on TV or how much drama they’ll cause. Why can’t you put that much effort into investigating their moral character?

I’m tired of defending you, pointing to what once was, citing your potential. The empty promises have become too much. Yes, you cast Rachel as a Bachelorette, but there’s been seemingly no consideration of a person of color as a lead since. Every woman on the show still conforms to ‘traditional’ beauty norms: tiny, trim, and perky. I mean, my friends barely want to come over to hang out with us on Mondays anymore because they leave feeling so disappointed.

I want to believe we can get back to that old place. Maybe if you could commit to therapy, I’d feel better, if I knew you were putting in the time to work on yourself. But you’re a grown-up now—sixteen years old—and I fear you’re set in your ways. …”

The Bachelor, The Bachelorette, and Bachelor in Paradise are very set in their ways. What if they weren’t? What if someone demanded they become better?