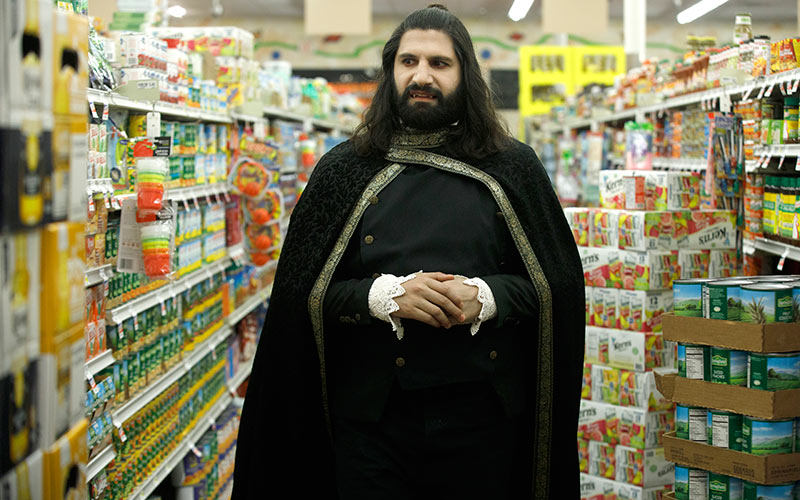 Kayvan Novak as the vampire Nandor in FX's forthcoming mockumentary series What We Do in the Shadows. Soon, FX will have actual reality TV, not just parodies of it. (Photo by John P. Johnson)

FX has officially announced just one unscripted show, The Weekly, which embeds with journalists from The New York Times. From the clips I’ve seen of it, it seems to land somewhere between a TV version of the New York Times podcast The Daily, Showtime’s The Fourth Estate, and 60 Minutes.

The Weekly premieres in June, and is being produced by Left/Right, which also produces Showtime’s The Circus.

But I recently learned that FX was taking pitches and developing more reality TV—a genre its ignored for years now, though it once aired shows such as 30 Days, a reality TV version of Morgan Spurlock’s Super Size Me, and Black. White., a show on which two families switched races.

So, during FX CEO John Landgraf’s press conference at the Television Critics Association winter press tour two weeks ago, I asked him about FX’s unscripted plans.

He said that FX has “ordered a number of docuseries and some documentaries, and we haven’t announced them yet.”

I asked what he was looking for, and he said this:

“I think like everything else that we’ve done, it’s not going to be, you know, a massive output. It’s going to be a small, very carefully curated, very selective output. I think we’ve found and felt that unscripted programming fits really, really comfortably inside what we’ve tried to do curatorially with the FX brand.

Plus, you’re going to find that our programs tend to have very interesting, compelling tones and characters, as a lot of our shows do, and are often even if they may be about a true crime, or about something on the face of them, you know, trying to get out bigger, more profound questions about history, or about the human condition.

In other words, they’ll be doing in their area what Gianni Versace: American Crime Story or People vs. O.J., or so many of other things we’ve done.”

Landgraf also said the shows will be “limited” in episode orders.

Will FX’s ‘profound level of respect for’ unscripted creators

Landgraf later told Variety that “having [unscripted] be a sustained and enduring part of our brand is exciting, because we have a profound level of respect for the level of filmmaking talent, the level of storytelling talent, in those genres.”

That is exciting, as is the prospect that FX could contribute to helping elevate reality television.

It’s a genre that still largely treats its viewers as imbeciles, from the same footage being repeated before and after commercial breaks to interviews that are inserted to make sure someone describes the thing we just watched.

What’s most frustrating for me about those kinds of choices—which can emerge from bad network notes—is that some reality shows like Survivor do incredibly well in the ratings without infantilizing its audience.

The same is true of dramas and sitcoms on FX, AMC, HBO, and elsewhere, which develop complex storylines and rich characters without having to over-explain.

Netflix has helped to counter this maddening trend. As part of its mission to drown the world in content and make everyone dependent upon it, Netflix has been increasing its reality TV output in the last year, and seems to be attempting to produce better, happier versions of familiar broadcast and cable TV shows.

Sometimes that’s worked—Queer Eye, Nailed It!, Marie Kondo—but those efforts haven’t always been creatively successful. (Its version of MasterChef didn’t work for me, nor did Westside.)

Of course, FX’s prestige dramas don’t always work, either, either creatively or in the ratings. But there’s an obvious attempt to make better television.

At their best, they’re smartly conceived, expertly crafted, and wildly entertaining to watch. Reality TV could use more of that.