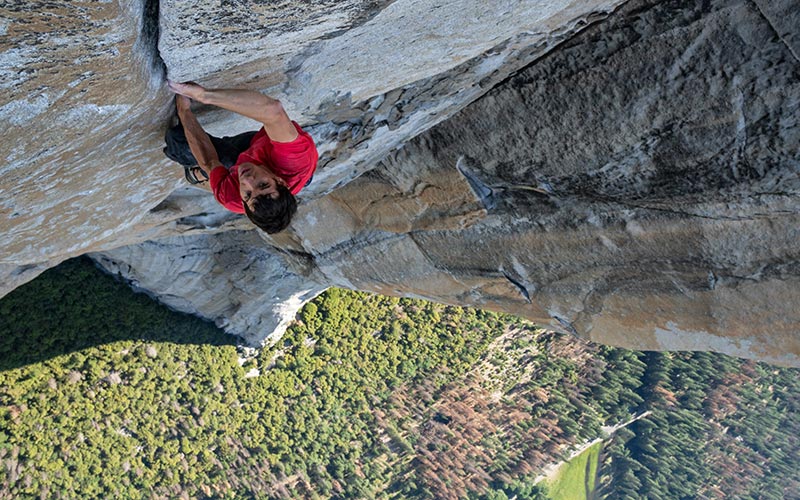 The Oscar- and BAFTA-winning documentary Free Solo—which follows a man as he climbs El Capitan, a 3,000-foot wall of granite in Yosemite National Park, without ropes—will be on television, for free, March 3. (Update: NatGeo is re-airing it Dec. 26 at 9.)

Just watching the trailer for Free Solo makes my hands clammy and damp, and the moments where Alex Honnold actually climbs are literally breathtaking—even knowing that he didn’t die trying.

First, though, the other Oscar-winning documentary, the short film Period. End of Sentence., is currently available on Netflix.

When its director, Rayka Zehtabchi, accepted the Academy Award for short subject documentary film this past Sunday, she said, “I’m not crying because I’m on my period or anything. I can’t believe a film about menstruation just won an Oscar.”

It is remarkable, especially considering the Oscar voter who told The Hollywood Reporter that the documentary is “well done, but it’s about women getting their period, and I don’t think any man is voting for this film because it’s just icky for men.”

The short film—which is now streaming on Netflix—is a 26-minute long look at a worldwide problem: the half a billion women worldwide who don’t have access to products like pads and tampons, which means they may miss school, work, and other activities while menstruating.

Both the film and a project to bring access to women in India were born in a high school classroom in California. A teacher, Melissa Berton, and her student, Helen Yenser, and “a group of other high school students formed The Pad Project, partnering with an nonprofit organization called, Action India. Through bake sales, Kickstarter and ‘yogathons,’ they raised enough money to purchase a pad machine ($12,000) and produce a documentary,” The Today Show reported.

That machine not only gave access to pads to women in India, but also empowered women because they became entrepreneurs, being able to make and sell pads to their communities.

If you can’t wait, Free Solo is still in some theatres, and is currently on Amazon Prime Video, iTunes, Google Play, and elsewhere.

In the movie, directors Elizabeth Chai Vasarhelyi and Jimmy Chin followed Alex Honnold’s attempt to climb the side of Yosemite National Park’s El Capitan without ropes and with only his bare hands.

Their ability to capture that climb in such close-up, intimate detail—NatGeo calls it “exquisite artistry and masterful, vertigo-inducing camerawork”— was also a significant feat, and was possible thanks to a team of filmmakers that included some accomplished climbers.

They were also filming in a National Park, which also had its own challenges, including that drones are not permitted inside National Parks, so those couldn’t be used. (For aerial shots, they used helicopters, and cameras aboard had 1500 millimeter lenses to get up close.)

But the film is about much more than just the one climb.

As one of the cinematographers, Clair Popkin, told TV critics at the Television Critics Association press tour:

“We all have wanted to make a strong character study about courage, about Alex, and kind of living with purpose and pursuing your dreams. And it’s not just a climbing film and I think that’s why it works so well is it’s a human story. And I think it’s the fact that it’s achieved that and people are taking a lot of inspiration from it is a testament.”