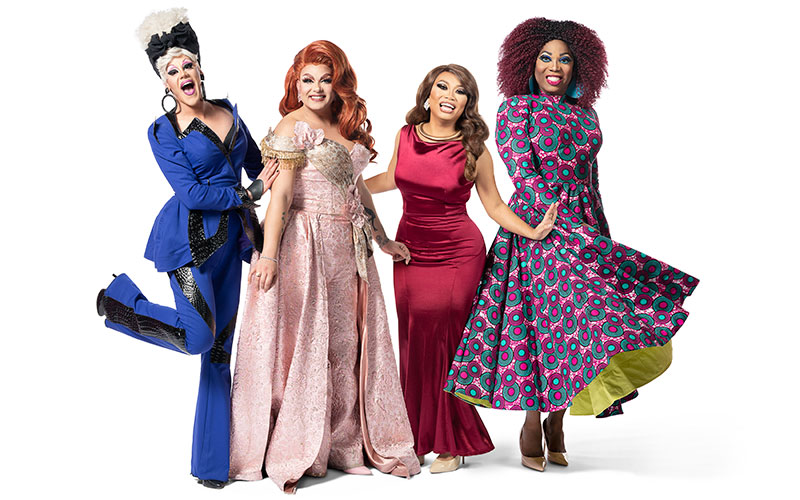 The specials—described in detail below—focus on four drag queens from RuPaul’s Drag Race helping a woman who’s getting married; wildlife in Africa, in a show produced by the creator of American Idol; unsolved murders of almost 30 African-American kids in Atlanta; and a live mummy—er, a mummy, live.

Josh Gates, star of Destination Truth and Expedition Unknown, will open a sarcophagus live on TV—or at least, be there when one is opened.

Expedition Unknown: Egypt Live will air April 7 at 9 on the Discovery Channel, and Discovery executive Nancy Daniels described it as “Discovery at its best, as we seek to uncover history that has been buried in the sands of Egypt for millennia,” and called it “one of his most ambitious expeditions yet.”

This will take place 33 years to the month after Geraldo Rivera opened Al Capone’s vaults live on TV, only to find nothing.

The special will be two hours long and have two other on-camera experts, according to Discovery:

“Viewers will have the rare opportunity to see the inner chambers of an excavation site, where archeologists recently uncovered a network of vertical shafts leading to an underground network of tunnels and tombs with 40 mummies believed to be part of the noble elite.

The massive underground complex of chambers is a treasure trove of antiquities—all laying undisturbed for thousands of years. But there are several chambers yet to be explored—and many more discoveries to be revealed, including a mysterious limestone sarcophagus found buried deep within the complex. The identity of the mummy inside has been a mystery for 3,000 years… Possibly until now.”

A three-hour ID special will explore the unsolved murders of 29 black children in Atlanta in 1979 and 1980.

The Atlanta Child Murders will air on Investigation Discovery March 23, and ID’s Henry Schleiff promises it will “shine a light on every angle of this largely forgotten story.”

It’s produced by Will Packer, the producer of films such as Girls Trip, which, as IndieWire noted in a profile of him, was “his tenth first-place box office opening.”

In a press release, Packer said,

“Having lived in Atlanta for over 20 years, the story of this senseless tragedy is personally important to me, and the echoes of what happened 40 years ago still resonate in the city. I am proud to give a voice to the victims’ families, many of whom still seek closure to this day, and analyze how this story is more relevant than ever in today’s environment.”

The murders—and the man convicted of two adult murders, Wayne Williams and essentially blamed for the child murders, despite a lack of evidence—were the subject of a pretty terrible podcast, Atlanta Monster.

ID’s release says that the special will be “exploring new shocking evidence and unearthing once-secret investigations” and “explores whether Wayne Williams is truly responsible for these crimes or if something far more sinister was at play in the heart of the South.”

Drag Me Down the Aisle

Four drag queens best known from their appearances on RuPaul’s Drag Race will star in a special that sounds to me like an attempt to produce a version of Queer Eye.

TLC’s Drag Me Down the Aisle will air after an episode of Say Yes to the Dress on March 9.

The network describes it as “a fun and emotional roller coaster ride filled with laughter, tears, frustration and joy that will surely have viewers rooting for a happily ever after.”

It sounds to me like a potential backdoor pilot—i.e. a special that could turn into a series, if it’s well-received.

Here’s TLC’s description of the special:

“Every bride wants to feel special on her big day and Emily is no different. She is newly engaged, head-over-heels in love with her fiance and excited to get married; but deeply rooted body image issues have her second guessing her ‘dream’ dress, and an extremely tight budget has not allowed her the fairytale wedding she had hoped for. Emily, an Amish Country bride who is typically most comfortable in flannel, jeans and no make-up, desperately wants to step it up for her wedding day and knows she needs some serious help!

Determined to turn things around, and despite feeling nervous over her uber-conservative parents’ reaction, Emily enlists BeBe Zahara Benet, Thorgy Thor, Jujubee and Alexis Michelle as her own personal team of drag queen wedding experts who will have three short weeks to save the day. Jumping in quickly, the queens whisk her away on a wedding adventure full of surprises, helping Emily to step into a new look and newfound confidence as these unlikely experts go to work transforming her ordinary wedding reception into the fantasy affair she never saw coming. From the dress to the venue to the inner glow a bride always strives for, these unsuspecting and colorful wedding experts will need to use every trick in their bag to make sure Emily slays her special day!  With the help of her new friends, she’ll brush off her boring and find herself strutting down the aisle like the Queen she always had hiding inside.”

There are an ever-increasing number of natural history documentary series, and Discovery has announced one of its own, which will premiere sometime this year.

Serengeti will be produced by Pop Idol and American Idol creator Simon Fuller along with John Downer, who has produced other natural history shows.

Pasadena, Calif. – Tuesday, February 12, 2019 – Discovery Channel is set to premiere SERENGETI, a new innovative six-part series by American Idol creator Simon Fuller and multi-award-winning wildlife film maker John Downer. It was announced today by Nancy Daniels, Chief Brand Officer, Discovery & Factual.  With unrivaled access to one of the most pristine and unspoiled corners of the African plains, this groundbreaking series follows the heartwarming stories of a cast of African wildlife over the course of a year that showcase the dramatic moments that make each day of survival on the Serengeti a feat.

“We are thrilled to be working with Simon Fuller and John Downer as we bring Discovery back to its roots of presenting one-of-a-kind television events showcasing the beautiful world we live in,” says Daniels.

“Of all the shows I have created or worked on, nothing compares to Serengeti,” says Fuller. “The heartfelt stories, the intensity of the drama and the depth of emotion, is something I have been genuinely moved by. The genius of John Downer capturing the most personal and extraordinary moments from these beautiful animals’ lives is truly awe inspiring. I am also proud to have Discovery and The BBC as the best possible partners for such an important television event.”

John Downer comments: “In this unique partnership with Simon and a shared vision, Serengeti was a chance to take the techniques and immersive viewpoint I’ve always pursued to the next level, to tell the greatest wildlife story of all – the dramatic and emotional relationships between the most charismatic animals on the planet.”

Fuller and Downer have worked together on Serengeti for several years; their team employed innovative filming techniques in some of Africa’s most treasured regions painting the ultimate portrait of survival in SERENGETI.  Set to the backdrop of original music, this television experience combines Africa’s unimaginable beauty with its equally unforgiving brutality, highlighting daily challenges of life on the Serengeti –  such as a lioness trying to provide for her small cubs after being exiled from her pride – and witness firsthand how the animal experience isn’t so different from our own.