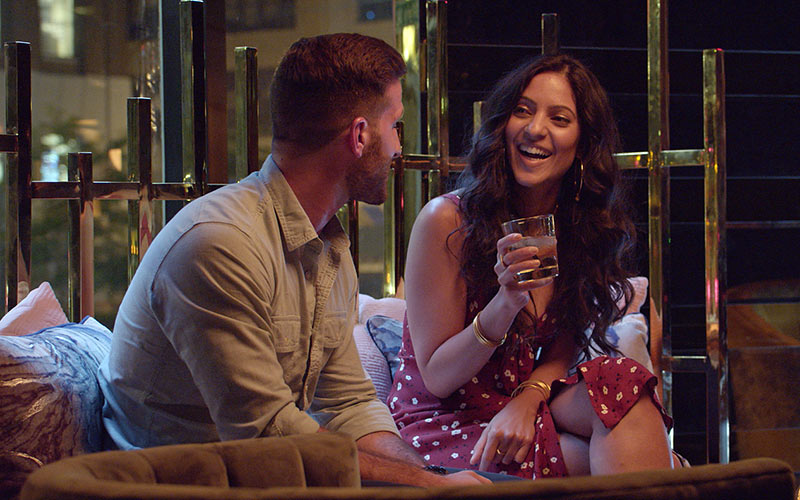 Gurki (right) on a date with Salim, one of five first dates she'll interact with on Dating Around (Image via Netflix)

Netflix’s Dating Around begins with a white Southern straight guy getting off a motorcycle and then walking into a restaurant with a blonde woman. That’s about as much as we know about both of them. It’s not a promising start.

While he remains bland, she turns out to be hilarious. And then she changes into another person—literally, a different person. As the evening of first dates progresses, five different dates pop in and out.

This style of editing is wild and disorienting at first, but it quickly becomes seamless because it’s so exceptionally well-done: the dater wears the same clothes on each date, and the person they’re dating keeps switching.

There’s no smash cut, just another person appearing in the same chair. Sometimes they swap mid-glass clink or mid-laugh, or while they’re crossing the street after dinner.

It’s an impressive post-production feat that manages to be seamless even when it’s obvious that these were filmed at different times. Conversations stay thematically connected, and we learn more about the dater and their dates.

That’s not exactly a conversation. But from what I recall of many, many first dates, it seems to mirror that awkwardness well, where each person drips out a little bit about themselves, to see what whets the other person’s interest. Some people don’t do that, of course, like the person in the second episode feels entitled to give a deluge of monstrousness and judgment to someone he’s just met.

Dinner follows drinks, and here, the conversations linger more before switching to another one of the five.

Still, the episodes move breezily—these are roughly half-hour episode, thank the Netflix gods—some people drop away, and not all dates make it post-dinner.

As the daters learn who they like, the editing narrows its focus, guiding us subtly but effectively. And it has to do all the work: There aren’t on-the-fly or studio interviews, there’s no host, and there’s no narrator.

None of them are missed. Dating Around shows how unnecessary they are.

There’s one sequence in the third episode where the dater watches his date eat, clearly horrified by the table manners. The editing does all the work; we don’t need to pop over to an interview for Lex to say, “When I sat at the table and watched him eating, holding his fork incorrectly and talking with his mouth full, I felt disgusted. I will not choose him for a second date.”

It’s remarkable to find a reality series that doesn’t feel the need to treat its audience like morons, and yet that and the brilliant editing is only half of what makes Dating Around so endearing and wonderful.

Although the first episode of Dating Around has a straight white man as its star, like nearly every other dating reality show, that’s not the norm here. (Luke and his episode are an unfortunate aberration, because they have the least personality; I’d suggest starting with episode two.)

It shouldn’t even be noticeable that the people here aren’t a heterogeneous group, but it’s a considerable contrast to what reality TV usually delivers: The daters and their dates are of multiple races and ethnicities, and different sexual orientations.

They’re younger and older, have different sexual orientations, and have different things that turn them on. Some of them are divorced; some have strong connections to—or damage from—their family’s culture or religion.

The conversations the cast members have, in their various configurations, sometimes drift into culture, religion, and sexuality, and the obstacles those present in dating, whether they’re self-created or deeply ingrained into our culture. So it’s not just “diversity” in casting, but actual attention to how dating and romance can be affected by internal and external perceptions, and by life experiences, and by institutionalized racism and homophobia.

There are white people and straight people on Dating Around, but there’s not just one of each type, and that makes for better conversation and connection, and for a better television show.

What also makes for a better show is what a light touch the producers have here. It’s clear there’s a lot of work, yes, from organizing the dates to the incredibly challenging job that editing must have been. And there’s talent behind the scenes: former Bachelor Pad and Bachelorette showrunner Alycia Rossiter is an EP here, though there is none of Bachelor Nation’s toxic DNA in this show.

It’s enough, though, to just show us people on a date. They don’t need to show up in a costume with scripted lines, or compete with other people.

Dating Around does lose me at the end. The title sequence promises “one second date,” but there is no on-camera second date. Instead, episodes end by showing us who’s been chosen.

As the dates come to an end, there are hints—such as phone numbers exchanged along with excuses for weekend plans, suggesting that person is not going to get a second date.

The big reveal comes are part of an over-produced conclusion that’s set to poppy music and so heavily staged that some of the cast just can’t manage to make it look authentic. And at least one of the reveals really surprised me, and I was annoyed to not have any idea why the dater chose that person, because I was convinced I knew who they’d choose.

But this is about observing dates, and watching people interact, and it succeeds wildly.

Two years ago, NBC aired First Dates, a show I loved for its hands-off approach, and the diversity in its casting. (Read my review, or watch season one.) Alas, NBC didn’t renew it, alas, because it was so low-rated.

I hope Dating Around gets more of an audience, because it really feels like the spiritual successor to First Dates, and is a wonderful Valentine’s Day gift from Netflix.