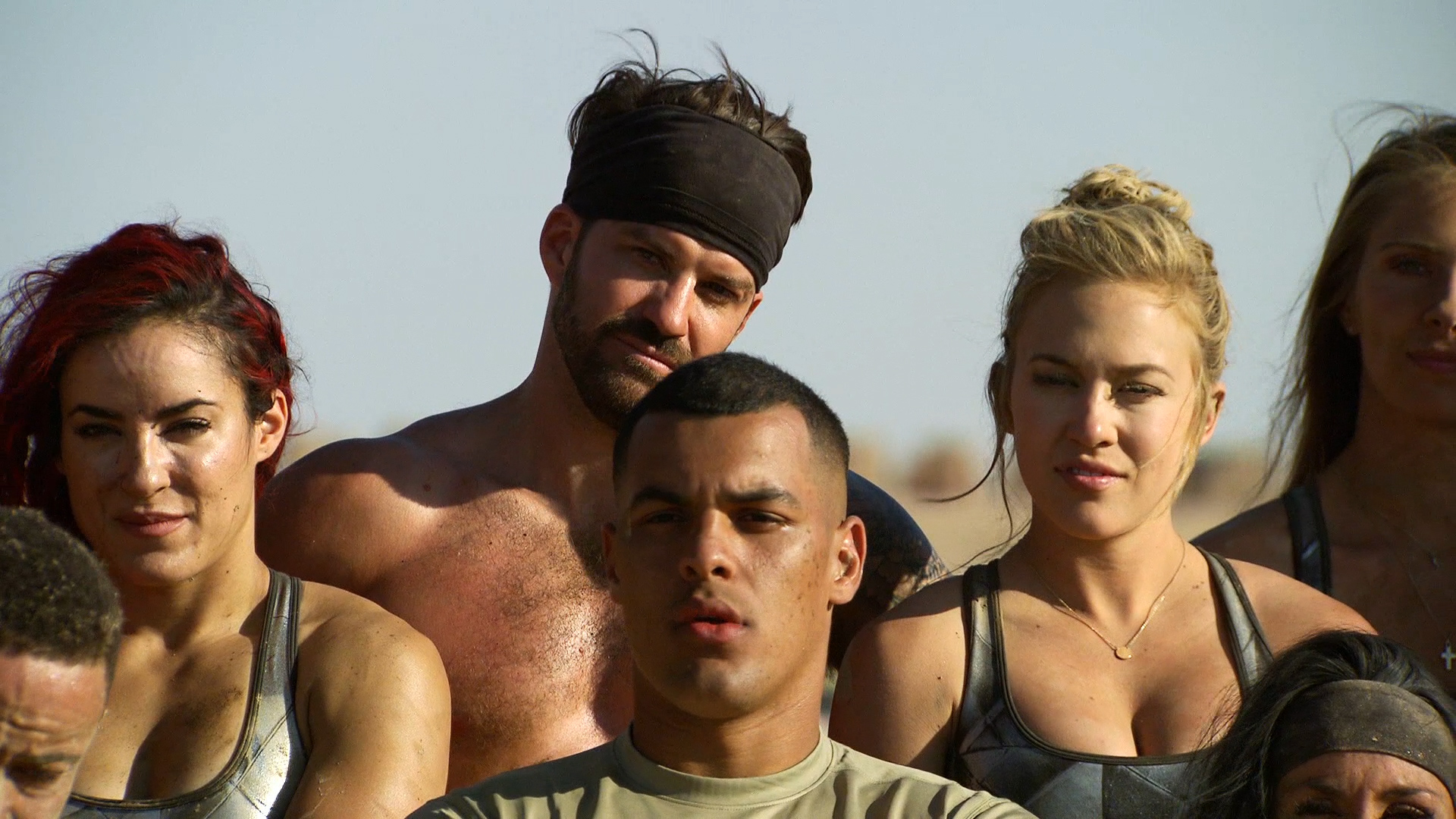 Cara Maria, Johnny Bananas, Josh, and Morgan on The Challenge: War of the Worlds episode 3. (Image from The Challenge via MTV)

On the second episode of The Challenge: War of the Worlds, Ex on the Beach UK cast member Ashley C. said, “I’m seeing arguments and little tit for tat about shit that’s happened 17 seasons ago. Oh mate, you should have seen what happened 54 seasons ago! No mate, get over it.”

The Challenge has not gotten over it. It’s an ongoing soap opera, like The Bachelor, though if The Bachelor had fewer roses and more steroids. And the shit that happened during previous seasons has given the second and third episodes their weight.

Both the game’s structure and individual challenges are designed to light these conflicts on fire. However, The Challenge is so complicated—or its players and audience so slow—that it took three episodes to lay out the structure of the game.

The basic idea: the top three teams form the Tribunal, receiving immunity and the power to nominate three pairs for eviction, though they eventually individual votes for the nominated pairs.

They also get the opportunity to stand high above those other teams on what looks like the set of Judge Judy: Home Depot Edition.

As TJ laid out these rules, I was taking copious notes, and every time he said “now, one more thing,” I’d pause the episode, go to Target, and buy a new marker board.

After some drinking, fighting and/or making out, everyone goes to the Killing Floor (the delightful name for the challenge arena), where the Tribunal casts their votes.

Then the team who they’ve voted to kill gets to choose their opponents—who can’t be a member of the tribunal. The winners of the Killing Floor challenge get immunity the next week in the form of a “relic,” which is just a thesaurus.com version of an immunity idol.

Hunter vs. Ashley, Bananas vs. Wes

Two seasons ago, The Challenge’s subtitle was “vendettas,” but that would have worked well for this season, War of the Worlds, because two major rivalries have played themselves out already: Hunter versus Ashley, which is grounded in her decision to keep $1 million for herself because of his slut-shaming, and Bananas versus Wes, which is a conflict so old Shakespeare wrote about it.

“Wes and my rivalry is more famous and well-known than the Capulets and the Montagues, except Wes was kind of like the ugly child that was banished from one of the families,” Bananas said.

First, Hunter and Georgia defeated Ashley and Chase in a game where a drone dropped a ball. Hunter got his revenge, returning to the house with immunity for next week’s challenge, while Ashley left the game with her $1 million.

Episode three came down to Wes versus Bananas, which is a conflict that I’m familiar with, because like them, I was born in the 1800s.

At first it seemed like they might work together to get rid of the new people. But in the episode 2 challenge, “Arms-a-geddon Tired,” a title for which someone should have gotten a raise, Bananas picked Wes to compete against, and it was very nice of him to create a seniors division to keep things fair.

That challenge, which was essentially tug-of-war, was going to last for an insane amount of time: “five minutes long,” host TJ Lavin said. Five minutes! Eat shit, Survivor’s five and a half hour long endurance challenge.

In the third episode, Wes was on one of the top three teams, so he nominated Bananas, a chance to finally end that Montagues and Capulets conflict after all.

Bananas and Morgan went up against Zach and Zahida, because Zach—despondent about his use of Bumble—bumbled a ball to Wes and Bananas was pissed about that.

The Tribunal’s vote came down to a tie, however, prompting host TJ Lavin to ask “Are you sure?” repeatedly, and basically goad them into switching their votes to Bananas and Morgan. That’s the kind of thing that would probably be illegal in a game that had any rules or integrity or people who cared.

The Killing Floor challenge was stunning—because it did not involve any kind of homoerotic wrestling or punching each other. The two teams didn’t even get to see each other compete.

Instead, they had to place the correct country names and flags onto a giant map of the world. Okay, sure, it was a climbing wall too, but that’s surprisingly intellectual for The Challenge, on which contestants can barely complete their sentences.

When the thinking dust settled, Johnny Bananas was out, though of course he’ll be back. This is his job, after all.

The game gets personal, and people take off their shirts and scream

All of this was made for two pretty entertaining episodes, with two decent challenges.

The location for the episode-three challenge was spectacular: it took place amid in a “stone graveyard,” where large rocks the size of small shipping containers were scattered around.

The players had to search for balls in that area, and then pass off those balls to their partner, who had to run through a mud pit and cross the finish line—ideally without having their ball stolen by someone else. This was an odd combination of violent and hot, with half-naked, muddy people grabbing each other.

The tug of war one was something ultimately very simple with a lot of unnecessary set dressing, like TJ driving over old cars with a monster truck, but I guess that’s what The Challenge is: excess for its own sake.

The excess that lost me, though, came in episode two, after tug of war.

The editors had been doing a solid job of keeping people like me—who’ve skipped two or three hundred Challenge seasons—in the loop and up to date with the drama so it’d be clear why people were in conflict.

But then, at the house, things kind of exploded, and I had no idea what was going on, or who was mad, or why. It’s the kind of conflict that led me to skip previous seasons—though so far, it’s just been that one night, and very little ultimately happened.

At one point, Hunter said, “There’s no need to act like that bro,” and then took off his shirt, which is apparently a signal that things are getting serious. Security guards, who looked like they’d been cast as extras on an ABC show about the FBI, appeared and restrained him.

Except not very well: Outside the house, Hunter yelled “fuck that” and jumped on a railing, breaking it. He may have been mad about some clapping.

Then Hunter disappeared and reappeared the next day without any acknowledgement of what’d happened or if there were consequences for breaking a railing that didn’t belong to him.

The episode moved on to Zach and Jenna, who were fighting about his infidelity, apparently. This was somewhat comical in that he gave the world’s worst excuse, telling her, “Was there a dating app on my phone? Yes. Did I download it again in Africa to see if it worked? Yes.”

That’s so kind of him to check on the app and make sure it was working. In the middle of their fight, suddenly it was daytime, and suddenly Zach was calling for security because he couldn’t handle, uh, talking.

The one part of the conflict that made sense was Jenna summarizing the Challenge’s general misogyny by saying, “You do stupid shit, and then I’m supposed to apologize.”

Watching all of this, I was tempted to agree with Ashley C. (“get over it”) and Da’Vonne, who said in an interview, “I don’t give a damn about anybody else.”

But The Challenge really is built on this millennia-long series of conflicts and drama, with new people being added occasionally so they, too, can take off their shirts and expand their necks to twice the size of their heads and then charge at other people.

For better or for worse, that’s what it is. And so far this season, it’s mostly been better.