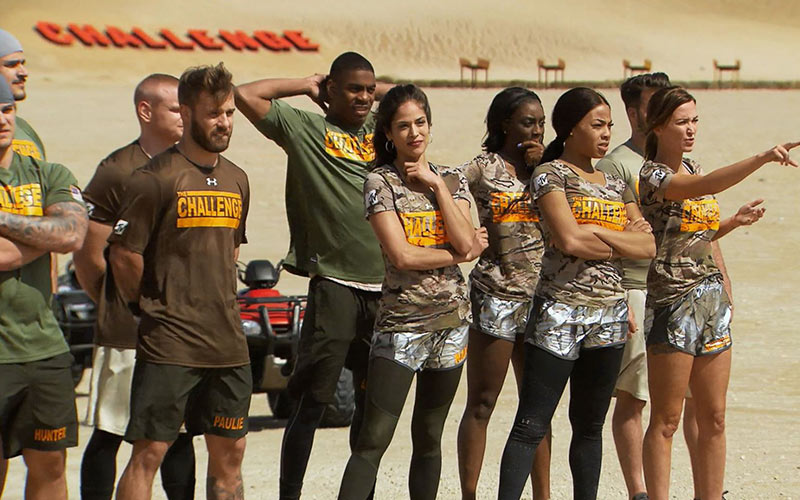 The veterans survey the prospects on The Challenge: War of the Worlds' premiere. (Image via MTV video clip)

I haven’t watched MTV’s Challenge in years, because it’d provided me with a lifetime’s amount of evidence about how alcohol, violence, and sex combine in awful ways.

So I watched. And I was really impressed: with the epic opening sequence, which was set to a cover of “Born to Be Wild” that’s actually called “Epic Trailer Version.”

The Challenge veterans have been there so long they’ve become, as Johnny Bananas said, “soldiers that are about to go to war”—probably special ops soldiers, the kind who sneak up on their targets on ATVs driven through sand dunes while camera crews film them from multiple angles.

The episode title is “Apocalypse Now,” because MTV is really serious about ensuring that its youngest viewers will one day say something like, Did they name this movie after The Challenge?

Before the soldiers could barrel in and show the newbies who’s boss by waving hello, TJ Lavin told the new people, “I searched high and low all over the world, to find each and every one of you.” TJ, you should have looked harder.

Da’Vonne was excited to find “my Big Brother people” out there in the desert of Namibia, and I’m sure the Big Brother people were thrilled to be on a reality show with a prize that’s actually up to 2001 standards: $1 million.

However, they learned that there was an obstacle in their way: “the two prospects that finish last are not going to be moving on today,” as TJ said.

Big Brother winner Josh told us, “If anyone’s in my way, uh, they’re fucked, ‘cause I’m playing no games this season.”

Josh was right about the “playing not games” part: He came in last place and went home first.

The Challenge’s challenge provides an obstacle

The competition was beautifully shot—slow motion images of contestants racing after balls down a huge dune, TJ Lavin wandering around with this airhorn—and perfectly calibrated for this group’s ability to comprehend it. GET BALL MAKE PUZZLE TEAR OFF SHIRT SCREAM HAVE SEX.

I’m used to watching Survivor challenges, where people who haven’t eaten or slept well in weeks put every bit of energy they have left into intense physical and mental challenges, so I was surprised to find that, on The Challenge, the challenge themselves were basically just time-killers until the cast could bang each other.

That meant there was a lot of sexual tension while putting together a puzzle that had so few pieces I’m surprised it didn’t just fall into place when it was dumped out of a bag.

Zach, upon finishing in an indomitable fourth place, screamed “and I’ve got huge balls.” Yes, we saw you chase them down a sand dune.

Kyle, failing to get his puzzle up in time, yelled at the spectators, “Girls, don’t be turned off by this. I’m still great in bed.”

But there was reminder of real romance thanks to Chase, who referred to his previous reality show, The Bachelorette, as “some love show.” (That’s “the most dramatic some love show ever,” Chase.)

Besides learning about the cast’s thirstiness, I also learned some things about how MTV views its audience, such as when they made sure that Challenge viewers knows what twins are.

Big Brother’s Julia explained, “There is someone here that looks like me. That’s my identical twin sister, Liz.”

Thankfully, I won’t have to try to keep them straight because Liz was eliminated. So two Big Brother houseguests were the first out.

The show kind of deflated for me once it go back to the house—excuse me, bunker—though I really appreciated the editing of the cast running into the house, and then Cara Maria touring the space with Paulie and showing him where they would have sex, with arrows popping up to show us where, exactly. Though maybe some of the arrows should have pointed at their bodies.

There was one conversation—when Hunter caught a new person up on what happened last season—that made me really, really wish I’d watched last season.

The editors included a flashback, and while I loved it, I think I would have appreciated seeing this even more at the end of a long season.

Anyway, Ashley and Hunter were the final team, and Ashley got to decide whether to share $1 million with him or keep it. She said:

“This guy’s belittled me, put me down. I’m keeping the money.”

I have no other information about the season, but taking her at her word, that is just the best. It feels like a huge moment in reality TV history—a person treating another person terribly and then getting punished for it, not rewarded—and I missed it because this show is such garbage. Damn.

Meanwhile, the cast played beer pong, and a dig about Eminem’s mom became temporary drama. But true excitement returned when TJ Lavin reappeared, sentences in hand, ready to make good on his promise that the game will “be turned upside down.”

The big twist: partners were chosen by the prospects.

Stop! No seriously: stop. What’s the real twist? Because that’s not turning anything upside down. Although maybe I was supposed to watch that upside down? Standing on my head with all the blood draining into my brain and making sure it seemed particularly amazing?

The bigger twist was that 1) a cast member I didn’t even know was on the show broke his arm, maybe during the challenge, because this show is still a complete wreck, and had to go home, which 2) meant the return of another wreck, Big Brother’s Josh.

That brought us to the season supertease, set to this epic and probably inaccurate song, which gave a preview of some extreme and fascinating-looking challenges that may or may not end up with several dismemberments and/or increased horniness.

To be serious for a paragraph: I was far more entertained than I thought I’d be, and appreciated that there were no drunken physical altercations, which is really what finally turned me away. I may just be back next week to see what twists The Challenge comes up with next.

Update: An earlier version of this recap included references intended to refer to TJ Lavin’s hosting, but seemed particularly insensitive in light of what he went through nine years ago, and which I’d completely forgotten about when I wrote the first draft.