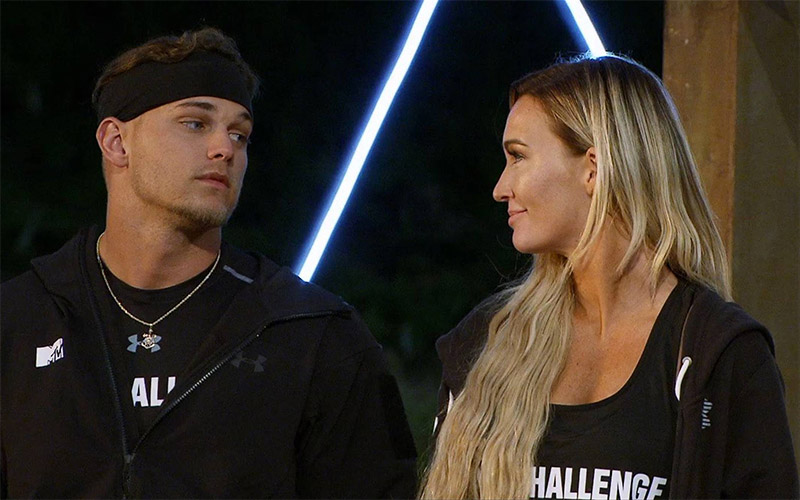 Hunter and Ashley early in the season on The Challenge: Final Reckoning (Photo by MTV)

Two days before Thanksgiving last year, The Challenge: Final Reckoning aired its finale, “Who Wants to Be a Millionaire.” And in that finale, misogynistic behavior and language on an MTV reality show finally had a consequence.

There was a brief flashback to last season during the premiere of The Challenge: War of the Worlds, but it didn’t cover the moment in full, and watching prompted me to go back and learn more.

On her first day in The Challenge: Final Reckoning house, Ashley Mitchell  had sex with another contestant, Kyle Shore, who’d previously hooked up with at least two other Challenge contestants.

Ashley’s partner on The Challenge, Hunter Barfield, criticized her, calling her a “stupid fucking slut” in a conversation with other male contestants. (Why is that slut-shaming? Here’s the definition.)

Flash-forward to the finale of season 32, which aired two days before Thanksgiving. Ashley and Hunter were the team that finished two days worth of challenges faster than anyone else—but they were also being timed individually, too.

Ashley finished slightly faster than Hunter, which meant she got to decide what to do with the $1 million prize.

Giving the contestants that choice has only happened once before in Challenge history. Back then, a male contestant, Johnny Bananas, decided to keep an entire prize, $275,000, for himself, using the opportunity to punish his partner, Sarah.

“This guy’s belittled me, put me down, slut-shamed me, and also threatened my life and my family’s life. I’m keeping the money.”

Hunter started crying, and then this exchange happened:

Hunter: “Oh my fucking god, you will burn in hell for this, and karma will come at you for the rest of your entire life. I hope you know that God’s got a special place for you.”

Hunter: “What you’re making are the craziest accusations ever.”

Ashley: “That slut costs me a million dollars, I’m coming for her family—isn’t that not what was said?”

Hunter: “I never said ‘slut.’ I would have never done that to you”

That’s when the editors flashed back to Hunter doing exactly that. Chatting with the other guys, he said:

“All I’m saying is, if this stupid fucking SLUT is gonna cost me a half a million dollars, then I’m coming for her family.”

The editors subtitled it and put “slut” in all caps to emphasize that’s exactly what he said.

To make sure everyone was clear that he’d never use misogynistic language, Hunter then screamed,

He also said things like, “You piece of fucking shit. I’ll pray for you” and, red in the face, screamed, “Ashley, you’re the craziest person here.”

In an on-the-fly interview, he made it clear that he would take no responsibility: “I will never forgive her for what she done.”

Ultimately, though, the evidence was clear and undeniable: Slut-shaming cost Hunter half a million dollars.

The Challenge has long been an ongoing soap opera with challenges and prizes, and Ashley and Hunter had history, too, which MTV referenced in their official season 32 bio:

“Ashley and Hunter had a whirlwind romance on The Challenge: Invasion of the Champions that quickly derailed into bitter arguments and loathing. Since then, the two of them have had a love-hate relationship, oftentimes in the same alliances with the same mutual friends but unable to work together without fighting. This season, all they have is each other, which neither one of them is happy about.”

After the season, during the reunion, Hunter said, “I regret what I said, because it’s not just who I am. But also I learned from it. I learned that, you know, you build your whole life building your character, and it takes 10 seconds to ruin it on national television.”

Then he started screaming at Ashley.

After the finale aired, Ashley told People that her decision was easy, and she’d previously discussed it with others in the house:

“Throughout this season, when it was getting close to the end and the only girls I had left were Marie and Sylvia, I had told them both in our little girls bathroom that if I ever had the chance to do that, I was gonna do it.

Because I was sick of the men in that house being so misogynistic, saying things like, ‘If a woman makes more money than you, that’s embarrassing, a woman should stay at home.’ And that’s mostly Hunter saying things like that.

So when I had the chance to show him, honey, not only am I better than you, I’m gonna be making way more money than you’re ever gonna make, as soon as I had that chance I did not even double think it. I think you saw on my face at the end. As soon as TJ asked, I started shaking my head like, nuh-uh honey, I already know what I’m gonna do [laughs].

I don’t get why Challenge fans are so antagonistic toward the contestants. And Andy, the best part of the finale last season where Ashley kept the money is that when she said, “he belittled me, he slut-shamed me, he threatened my family” — they flashbacked to footage of him literally doing all of those things, demonstrating with no equivocation that it wasn’t he-said/she-said, which I appreciated because otherwise Ashley could have been really vilified (more than she has been by some fans who don’t seem to see Hunter’s documented behavior as problematic.)”

I appreciate that, too. Whatever may have happened on previous seasons or that season, Ashley’s rationale and the evidence for it line up perfectly.

Still, it’s not surprising that fans—who’ve been attached to an IV of The Challenge’s misogyny for almost 20 years, and have learned to accept an abusive environment as entertainment—would direct their vitriol at Ashley.

Hopefully, though, these events will make some men on The Challenge—and perhaps some viewers, too—reconsider how they treat women.