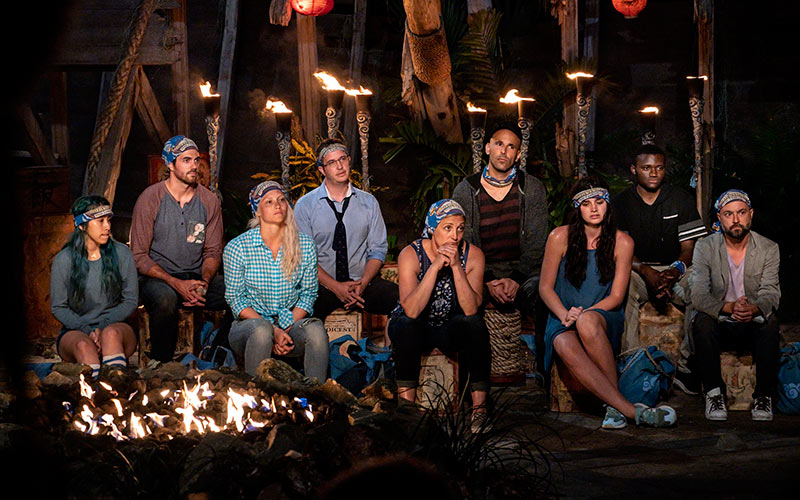 At the first Tribal Council of Survivor: Edge of Extinction, the person voted out was seated—by the producers—in the very center of the group. (Photo by Robert Voets/CBS Entertainment)

Discovery’s The Killing Fields aired its last episode one year ago, on Feb. 22, 2018. It was the final episode of season three.

The show premiered in 2016, and attempted something ambitious: following an investigation in real time, but doing so in an artfully produced series. It promised to examine “desolate and sprawling areas” where “dozens of deaths remain mysteries, baffling anyone daring enough to investigate.”

Alas, it didn’t quite work. When I reviewed the series, I found it to be well-crafted but also repetitive and lacking momentum. The show suggested something was going to happen, but nothing much did.

For season three, it moved to Wight County, Virginia, to examine the 2004 murder of Carrie Singer, and ended with what appeared to be a lead.

As to that lead, WKTR reported in Feb. 2018 that Lieutenant Thomas Potter “says investigators have received new ‘very promising’ information in Singer’s case, but it will take more time to see exactly where that leads.”

Since then, there haven’t been any publicized leads in her case.

However, Carrie’s mother, Patty Lord, talked to the Flagler College Gargoyle last April about her daughter, and said that she doesn’t like how the media doesn’t “really give a whole story of Carrie. All they are going to focus on is what happened to her.”

Although there won’t be new episodes, you can read my interview with its producers about how The Killing Fields was produced.

When The Vet Life will return

Last April, Animal Planet included the show in a press release with its “programming highlights,” saying that The Vet Life “averaged 935,000 viewers” in Q1 of 2018.

Until it returns, all three seasons are available on Amazon and on Animal Planet’s web site.

How is the order of voting decided in Tribal Council? Also, once voting begins are the survivors allowed to talk among themselves? Once idols are played do they stop filming and rearrange the votes in the urn to best effect? —Bob

Let’s start with the last question first. We know that, when Jeff Probst goes to tally the votes, he puts them in the most dramatic order possible.

The votes are arranged based on what happened in the voting booth (the producers watch a feed so they know how each person voted). The producers also have knowledge of idols that might be played, since they’ll ask players about that in pre-Tribal Council interviews. Of course, they can’t be sure, since players can decide in the moment whether or not to play an idol or advantage.

But Jeff doesn’t re-tally or re-arrange votes in the event of an idol play. Instead, he adjusts on the fly, and may pull out votes in a different order. Read this story for a more in-depth explanation.

As to the first question, voting order is pretty simple, with Probst calling players in the order that they’re seated. But it’s edited out of order for dramatic effect.

It’s important to know that the players have assigned seats at Tribal Council. Before Tribal, they’re put in an order determined by the producers. (They’re also outfitted with wireless mics, which they also wear during challenges.)

Players with conflicts are often seated next to each other. Those who are the focus of that episode tend to be in the center.

Thinking about that made me wonder: Are the people most likely to be voted out usually seated in the middle? Look at the first Survivor: Edge of Extinction Tribal Council:

Based on the events of that Tribal, it seems like Reem knew she was about to be voted out. But I wonder: How often is the person who’s voted out sitting in the center of the group, instead of on the edges? (If someone has free time, I’d love to see a tally!) And if you’re on Survivor and the producers made you sit in the middle, would you worry you were about to be blindsided? Hmm.

So, that’s the seating order. From my time on location for several episode-one Tribal Councils, I recall them just voting in order of their seats, perhaps left to right. That won’t be how it’s shown on TV.

Instead, the order we see people vote on TV is arranged in post-production for maximum drama. For example, someone who casts the tie-breaking vote might be shown last, even though they didn’t vote last in real life.

If Probst and the production did the same thing they do to the players as they do to the votes—arranged them in the most dramatic order possible—the other players could pick up on those clues and figure out what’s happening with the vote. So the voting order on location doesn’t really matter.

Finally, Survivor alum can correct me if I’m wrong, but I don’t recall any rule that prohibited talking during voting. I think we’ve even seen people whispering to each other during or just after voting, though my feeble memory isn’t recalling a specific instance of that right now.

The times when Survivor contestants are not allowed to talk or communicate with each other are the times when there are not cameras present to capture what may happen—and the production doesn’t want to miss a key moment or decision, or a spark that creates a future conflict.

Survivors will be instructed not to talk, say, on boat rides to Tribal Council or when they’re getting medical checks before and after a challenge.