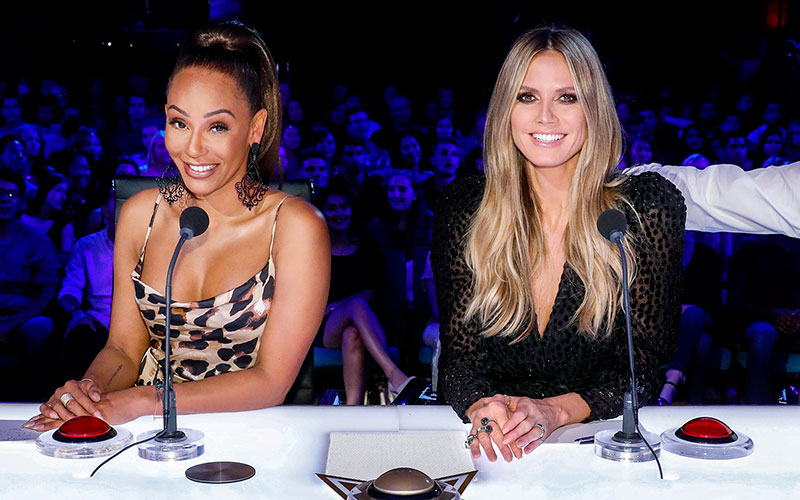 Mel B and Heidi Klum during America's Got Talent: The Champions (Photo by Trae Patton/NBC)

There’s a major shake-up on America’s Got Talent, which is replacing half of its judging panel and its host.

Heidi Klum and Mel B have left the show, while Gabrielle Union, Julianne Hough, and Terry Crews will join AGT. Gabrielle and Julianne will judge alongside Simon Cowell and Howie Mandel, who are both returning.

The panel has shifted frequently over its 13 seasons, but it’s had the same group since season 11—and Heidi and Mel B had been on the show since season 8 in 2013. They’re also judging “The Champions,” which is airing now.

Tyra Banks became host in season 12. Last fall, she referred to AGT in the past tense in an interview with Access Hollywood, saying, “I had a nice run.”

“One of the many secrets to the success and longevity of ‘America’s Got Talent’ is its fearless drive to reinvent itself. The next evolution of the format brings in fresh expert eyes to join Simon and Howie on the panel. Gabrielle and Julianne are two of the most aspirational women in the business, on top of being electric entertainers with talent across disciplines. I am excited to see how their knowledge, compassion and sheer joy enhance the experience for acts and viewers alike.”

The new AGT host and judges

“Our millions of longtime viewers have already embraced Terry as the host of ‘AGT: The Champions,’ and we are excited to welcome Gabrielle and Julianne to the ‘AGT’ family. They are ready to bring a new level of expertise, energy, entertainment and fun to our judging panel.”

Julianne Hough has been a judge on Dancing with the Stars, in addition to her on-camera work as an actor.

Gabrielle Union is an actor who starred in Being Mary Jane on BET and in the film Breaking In last summer. Here are their bios from NBC:

Union, who is set to executive produce and star in the highly anticipated “Bad Boys” TV spinoff “L.A.’s Finest” on Charter’s Spectrum network that is set to premiere on May 13, is well known for her roles in several high-profile films, including “Bring It On,” “Bad Boys II,” “Think Like a Man,” and last summer’s hit movie for Universal “Breaking In.” Union is known for her hit show “Being Mary Jane” which will have its two-hour finale in April on BET. Her bestselling memoir, “We’re Going to Need More Wine,” was released in 2017.

Hough is a two-time professional dance champion and has appeared as a judge on “Dancing with the Stars” and has starred in such films as “Footloose,” “Rock of Ages,” “Safe Haven” and the recent “Bigger.” She earned rave reviews in the Emmy-winning broadcast “Grease: Live” and will be seen in the upcoming Netflix anthology series “Dolly Parton’s Heartstrings.” She has produced two Miss USA broadcasts and various Disney holiday specials, has been featured in numerous high-profile campaigns and is active in a wide range of philanthropic endeavors, charities and humanitarian efforts.

Crews is an action-movie hero, sitcom star, advertising pitchman, playable video game character, high-end furniture designer and human rights activist. He co-stars in the Golden Globe Award-winning NBC series “Brooklyn Nine-Nine,” co-starred in the blockbuster hit “Deadpool 2” and the hit indie film “Sorry to Bother You.” Crews is also the face (and muscles) of Old Spice, a playable character in Microsoft’s Xbox One game “Crackdown 3” and a force in the design and art world. Crews was also named one of Time magazine’s Person of the Year as one of the “Silence Breakers,” speaking out against sexual harassment following the #MeToo movement.