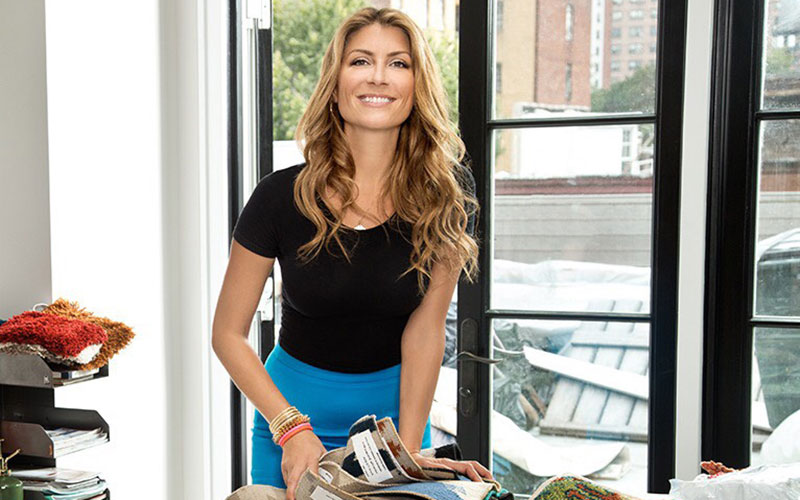 Genevieve Gorder, one of Trading Spaces' original designers, who's not returning for season 10. (Photo via TLC)

Trading Spaces will return in March with 12 new episodes, but they won’t include original designer Genevieve Gorder.

Her name wasn’t included in a TLC press release announcing season 10, which will premiere March 16, airing Saturdays at 8.

The six original core designers returned for the reboot, and all except Genevieve are returning. Here’s a preview of the new season. (My favorite moment is when Ty asks, “What do you guys think?”, and a homeowner says, “Hell no.”)

While the show doesn’t appear to have changed much from its first rebooted season, the spaces the designers will work on have expanded a bit beyond bedrooms and living rooms: TLC says they include “teachers’ lounges, twin sisters’ homes, attics, basements and even homes of ex-spouses.”

Genevieve has been filming a new Bravo show

Neither TLC nor Genevieve have said anything about why she did not return.

However, it seems likely that it has to do with her other projects: Genevieve’s own Netflix show premiered in August, and during the fall, she filmed a Bravo show on which she appears to be a judge.

Update: I heard back from TLC, and received this statement from a spokesperson:

“Genevieve will not appear in season ten of Trading Spaces. We will miss her and wish her the very best in her future projects.”

The original Trading Spaces reboot filmed in the fall of 2017, and then aired last spring. In the summer of 2018, Genevieve’s new show Stay Here premiered on Netflix; it follows her “and real estate expert Peter Lorimer [as they] show property owners how to turn their short-term rentals into moneymaking showstoppers,” according to Netflix.

After getting married in September, Genevieve started filmed a new, unannounced Bravo show, which continued through December, according to her Instagram posts.

In a story about her wedding last fall, she told People this about the Bravo show: “It’s really exciting. I was very excited to take the job” and called it “something new. The show incorporates a lot of my different powers that I haven’t been able to use before. So I’m pretty excited.”

But earlier, Genevieve posted this to Instagram, suggesting she was involved in the new season of Trading Spaces:

On Sept. 2, she posted a photo with Paige and Doug with the caption: “‘Hey guys can we get a shot of the Trading Spaces Crew?’ No, because WE CAN NEVER STOP LAUGHING, ever.”

“Congrats to my first family
On yet another season well done.
Trading Spaces season forever.”

Meanwhile, she posted about her new Bravo show: In October, she posted a photo of herself being filmed, and tagged Bravo. And that was followed by a Nov. 18 photo from the set of a Bravo show.

Trading Spaces has brought on a new designer, Mikel Welch, whose web site says he is “an on air personality and design expert for Steve Harvey” who “has created lavish greenrooms for prominent personalities, including First Lady Michelle Obama, Oprah Winfrey, Joan Rivers, Halle Berry and Tyler Perry.”

Besides his addition and Gen’s subtraction, the rest of the cast remains the same as the 2018 reboot.

TLC’s press release listed these 13 as the “designers and carpenters appearing this season”: