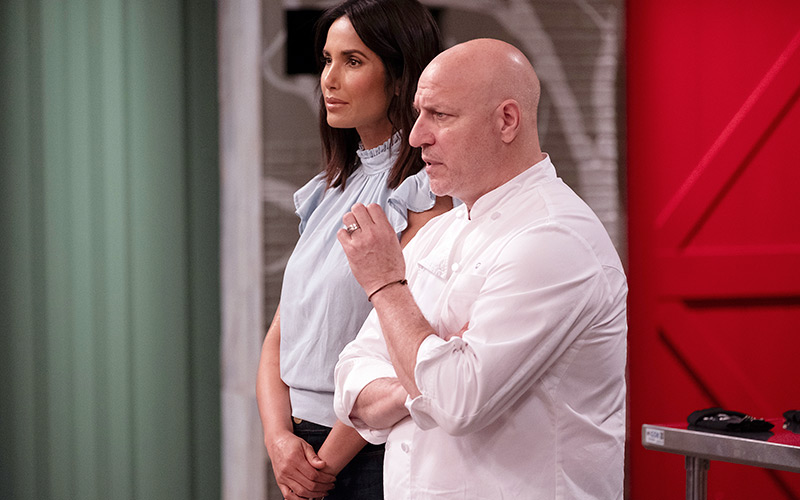 Padma Lakshmi and Tom Colicchio during Top Chef Kentucky episode 6, which brought a contestant back via Last Chance Kitchen. (Photo by David Moir/Bravo)

Top Chef Kentucky added a new contestant to the competition during last night’s episode, thanks to Last Chance Kitchen, a decent idea that’s spiraled out of control because of a series of bad decisions.

While I generally loathe Survivor’s Redemption Island, and Last Chance Kitchen is essentially a knock-off of that, Top Chef’s version makes more sense.

On Top Chef, the eliminations are not the responsibility of the other contestants, nor are they part of a strategic game. Instead, they’re based on subject evaluations of the contestants’ work by a panel of judges who often have to split hairs.

Last Chance Kitchen gives someone the chance to prove that their work is better than the work that got them eliminated, whereas Redemption Island effectively just nullifies the decision made by the other players.

I also appreciate that Last Chance Kitchen often shapes its challenges around the eliminated chef’s screw-up, giving them a chance for true redemption. That does make the whole exercise seem a bit sketchier, though, since it’s being created on the fly. Plus, having Tom Colicchio judge alone makes it even more subjective than the actual competition.

Carrie Baird, Brother Luck, and Jim Smith returned, with Brother burning his way through each competitor, old and new, just like he did last season.

You can’t have more of a Last Chance Kitchen ringer than Brother; even though he lost the final battle during Top Chef Colorado, he has a lot of experience, and that makes the playing field uneven, a thing I am going to keep pointing out even though every show does it now and no one seems to care.

Since we’re halfway through the season, and because the production can’t just leave things alone, the winner of the most recent Last Chance Kitchen battle re-entered the competition this week.

Having survived all of the initial rounds, Brother had to face off against Nini, who was recently eliminated from Top Chef Kentucky during the Restaurant Wars episode. Considering Nini’s elimination had precisely nothing to do with her cooking, Last Chance Kitchen was a great opportunity for her to redeem herself. After all, it involves cooking, not attempting to train a bunch of unskilled extras the producers brought in to overcomplicate the season’s most complicated challenge.

But even then, the producers couldn’t just have a straight-up showdown between Nini and Brother. No, they had to inject the real contestants into Last Chance Kitchen, to work as sous chefs for their friend (Nini) and someone they didn’t care about (Brother).

The clumsy attempt at getting the existing contestants to not just sit down and refuse to help Brother was that the producers basically turned Last Chance Kitchen into a team quickfire, with the winner getting an advantage for the elimination challenge. (That advantage turned out to be pretty inconsequential.)

All of this helped create unnecessary ugliness: He’s not one of us. Why are you helping him. Et cetera.

And all of this unfolded too quickly and chaotically for it to be either good television or a decent challenge. It was just a wreck, a bad decision piled on top of a bad decision and burned in the toaster oven until it caught fire.

Brother won Last Chance Kitchen, and re-entered the competition—and then the universe balanced things out and Brother was eliminated again.

The production couldn’t have foreseen Brother screwing up the challenge so much—well, maybe it could have, since he essentially did the same thing that he did last season and ignored the challenge—so there was a bit of satisfaction in his quick reentry and flame-out.

Except: Now we’re now at the same place in the competition we were last week.

And then there’s the you’ve-got-to-be-kidding-me twist: Brother is going back to Last Chance Kitchen, so now we can just do this all over again. 🙄🙄🙄

Oh, and by the way, Top Chef Kentucky’s format for Last Chance Kitchen is pretty much exactly what Survivor Edge of Extinction is doing next season, minus the weekly challenges. What happened to competition shows just eliminating contestants?