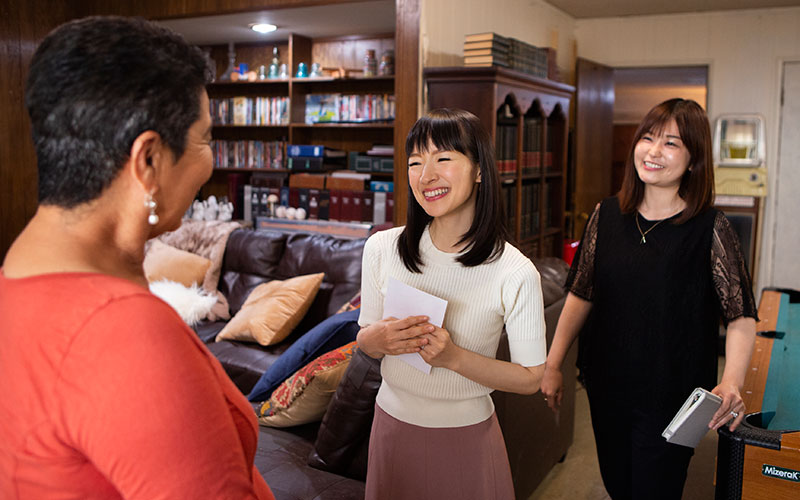 When I first heard Gretchen Rubin say the title of her forthcoming book, Outer Order, Inner Calm, those four words instantly clarified something very true about me: I need my spaces to be clean for my head to be clear.

They explain why I procrastinate by spending time cleaning and organizing first, and also why I’ve been so attracted to reality television that tackles clutter, from Clean House to Hoarders. Watching the process of turning a mess into well-ordered cleanliness in one hour of television time is very satisfying.

But I haven’t read Marie Kondo’s The Life-Changing Magic of Tidying Up, and had no plans to after hearing the hosts of the podcast By the Book attempt to live their lives by it.

I like the idea of thinking about whether something gives you joy or not, but Kondo’s strategies sounded like lunacy, like they’d add stress, not make it magically disappear.

So when I watched Tidying Up with Marie Kondo, Netflix’s new eight-episode series, I certainly didn’t expect to be so charmed by Marie Kondo, and so delighted by the simplicity of her ideas.

Nor did I expect to be so bored by the actual process of organizing.

The premise is simple: Marie Kondo goes to a couple’s home and helps them declutter, applying her KonMari organizational strategy. That involves tackling items in this order:

She offers tips and demonstrates her specific techniques, from how to fold a shirt (into a square that can then be filed into a drawer vertically) to determining whether or not to keep something (by deciding whether it sparks joy in your life).

Marie Kondo teaches the people she’s helping, and the show also cuts to scenes in a studio where she talks directly to us and offers even more actionable tips and techniques.

But when the couples actually started doing the work, that’s when the show started to lose me.

It’s both inspiring—I wanted to go re-fold all my shirts—and yet instantly boring to watch another person decide what to do with a shirt. I think that’s why I usually watch TV instead of pulling up a chair in an aisle at TJ Maxx.

Both Marie Kondo and the show itself seem to recognize this, as the edit moves along—and so does Marie, leaving the couple to do all of this work on their own. (The gaps in footage are covered by video filmed by the participants.)

Then she checks back in, maybe a week later.

But Tidying Up with Marie Kondo somehow misses the actual transformation. The participants—who sometimes seem like they could use some storage containers from target and also some couples therapy—just tell us how their lives have changed.

It’s magic! The rooms shift magically, too, from piles of clutter to organized spaces.

At the end of every episode, there are the traditional before and after images, but sometimes we see spaces transformed that are brand-new to the episode: Look at how the linen closet, which you never saw before, has changed from all the work you didn’t see!

Thankfully, Marie Kondo does: She has a light touch, and at any one moment, exudes as much joy as the entire Queer Eye cast put together. She’s so fun to watch, arriving with clear strategies and effusive energy. She leaps over piles of clutter like a kid playing in the sprinklers.

The rigidity of her organization system isn’t really on screen; she’s not Gordon Ramsay, demanding adherence to her way of doing things. Instead, she’s presenting what seem like simple strategies, even if the execution might require a lot of off-camera work.

Marie Kondo is also not judging or blaming, or shaming people for letting things get as out of control as they are. She just accepts it for what it is: things to be sorted through.

And her system for doing that just makes sense: Keep the stuff that actually matters to you. Store it in a way that allows you to see what you have. That’s it.

A reality show that has less

Marie occasionally shares interesting things about herself, like how her home can get messy too, but neither she nor the show are interested in opening up the closet of her life and pulling everything out.

It does do that for the participants, whose challenges in life and their relationships get a lot of attention—more attention than their cleaning, actually.

Perhaps that’s why the transformations don’t really work: it’s a lot of exposition, not a lot of excavation.

As a result of this, though, Tidying Up with Marie Kondo also resists the tropes of other makeover shows: there aren’t explosive confrontations, there isn’t a sense that the cameras’ presence is exploitative.

The most affecting scene in each episode is one that lacks dialogue: Prompted by Marie Kondo, everyone sits in silence, and thinks about the home. There’s just light underscoring of emotional music, and close-ups of people with their eyes closed. That was very moving to me, an illustration of how important spaces are.

Whereas Hoarders is about people with mental illness getting emergency help, this is a show about making small changes to improve your just-fine life.

It’s not a perfect show, but it’s the perfect reality TV series to start the new year with: a sense of possibility and potential that leaves the stress and messiness behind, and just embraces what’s in front of us.