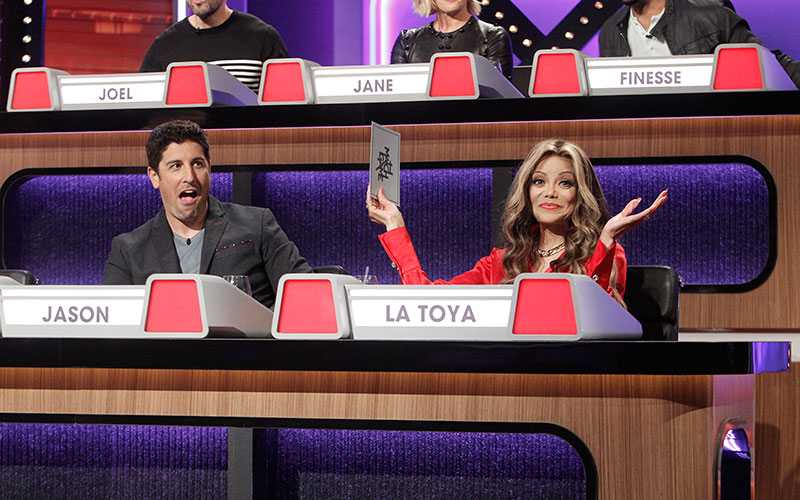 Jason Biggs reacts to La Toya Jackson's answer on Match Game, which is back for a new season. (Photo by Lou Rocco/ABC)

Happy 2019! I hope your new year has been off to a roaring start. I spent this past weekend in the mountains with friends and family, which was a nice recovery from the chaos of the holidays.

Speaking of roaring starts: There is so much reality TV premiering this month—with 18 shows on Jan. 1 and 2 alone! So let’s get to it.

First, since there were almost 30 reality shows debuting or returning last week, I’ll refer you to the winter reality TV guide for a full list.

But here are a few highlights:

Tonight, NBC brings back acts from the U.S. and international editions of Got Talent for a short seven-episode series, America’s Got Talent: The Champions (NBC, Mondays at 8).

The Bachelor is back with another blank slate as its star. Colton Underwood begins the search for the end of his virginity tonight (ABC, Mondays at 8).

Antiques Roadshow (PBS, Mondays at 8) returns for its 23rd season, which will take the show out of convention centers and into historic venues. Later today, I’ll have a behind-the-scenes story about how the show is produced.

Right before it is the return of Kids Baking Championship (Food Network, Mondays at 9), which has contestants ages 9 to 13.

The ads for Lindsay Lohan’s Beach Club (MTV, Tuesdays at 8) baffle me, but the actor is back with another reality show, this time following her as she launches a club in Greece.

Six young rappers compete for a recording contract on The Rap Game (Lifetime, Jan. 10 at 9, then Thursdays at 10).

Richard Rawlings and his crew do more garage renovations on Garage Rehab (Discovery Channel, Tuesdays at 8).

On Cartel Crew (VH1, Mondays at 9), young adults who are descendants of people involved with drug cartels are followed by cameras as they try to “make a name for themselves outside of the drug world,” according to VH1.

In crime reality TV, The First 48 Presents: Homicide Squad Atlanta (A&E, Thursdays at 9) follows Atlanta homicide detectives, while The Dictator’s Playbook (PBS, Wednesdays at 10) takes deep dives into the rise and falls of six different dictators from the past century.