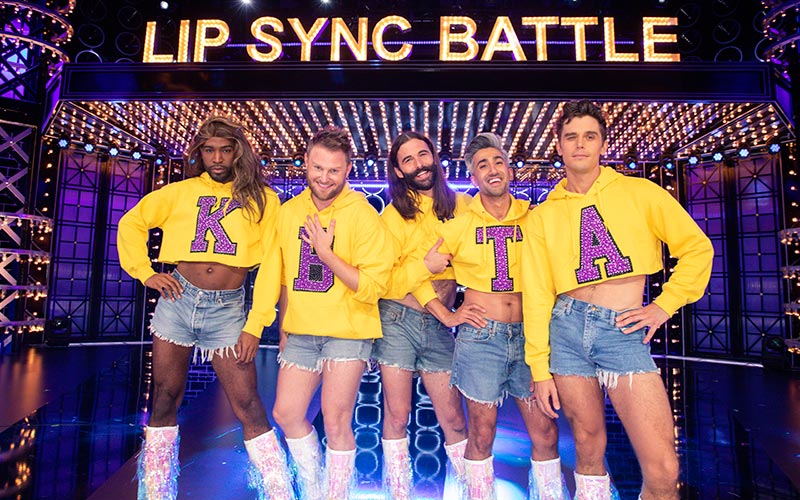 The new Queer Eye Fab Five will compete in an episode of Lip Sync Battle. (Photo by Paramount Network)

Good Monday morning! It’s another full week of reality TV shows premiering, and the non-stop madness of Celebrity Big Brother—which just announced its cast—doesn’t even premiere until next Monday night.

Here’s your look ahead at what’s premiering this week. Happy watching!

Temptation Island, of the earliest shocking reality shows makes a return to television this week, almost exactly 18 years after it first debuted. WAIT 18 YEARS? Excuse me while I go shout into a canyon: WHAT HAS HAPPENED TO THE TIME?! LIFE IS FLEETING!

Anyway, the first episode of Temptation Island (USA, Tuesdays at 10) is already online; here’s how to watch and my recap/review of it. Tomorrow, I’ll have an interview with its host, Mark L. Walberg.

The Fab Five from Queer Eye will be among the celebrities appearing on Lip Sync Battle (Paramount Network, Thursdays at 9). Among the other lip syncers: Andy Roddick and Big Bird.

Oxygen also has two new murder shows: Smiley Face Killers: The Hunt for Justice (Oxygen, Saturdays at 7) which is about a series of deaths from drowning that may be connected, and Mark of a Killer (Oxygen, Sundays at 7), which says it “examines the disturbing behaviors of serial killers.”

America’s Most Wanted host John Walsh returns with a new live series, where viewers will be encouraged to help solve violent crimes. In Pursuit Of with John Walsh (ID, Wednesdays at 10) says it will be “harnessing the power of ID’s active and engaged audience could bring these criminals to justice.”

On the new season of Bring It! (Lifetime, Thursdays at 9), Coach D adds boys to her Dollhouse Dance Factory team.

Made in Staten Island (MTV, Mondays at 10) is a new series that says it “follows eight Staten Islanders as they battle each other, and the odds, to step out from the shadows and change the reputation of the island.”

The former Top Gear guys—Jeremy Clarkson, Richard Hammond and James May—are back with another season of their show The Grand Tour (Amazon, Fridays).

The horrific story of “Dirty John” was first told in a thrilling series in the L.A. Times. Then it was turned into a mediocre podcast, which still became a hit because the story is insane and compelling enough to override the terrible narration.

The podcast inspired a scripted Bravo series, with a starring performance by Connie Britton, which concluded last night.

Dirty John: The Dirty Truth (Oxygen, Monday, Jan. 14, at 8) and “traces con-man John Meehan’s trail of manipulation that started long before he met Debra Newell” and “takes a deep dive into his troubled past, his altercations with law enforcement, and features exclusive interviews with former girlfriends who speak out for the very first time,” according to Oxygen.

Rodents of Unusual Size (PBS, Monday, Jan. 14, at 9) follows people in Louisiana who are trying to stop the wetlands from being destroyed by an invasive species: 20-pound rats.

The Swamp (PBS, Tuesday, Jan. 15, at 9) is about Florida’s Everglades, the vast expanse in the southern part of the state that is critically important but has also been repeatedly abused. American Experience executive producer Mark Samels said that the documentary’s “story of the repeated efforts to tame the Everglades—and the often deadly results of those attempts—is a particularly cautionary tale in these days of increasingly violent natural disasters.”