It’s Shark Week » Instead of lying about extinct sharks, Shark Week is doing something even more harmful.
home > Survivor > Survivor David vs. Goliath 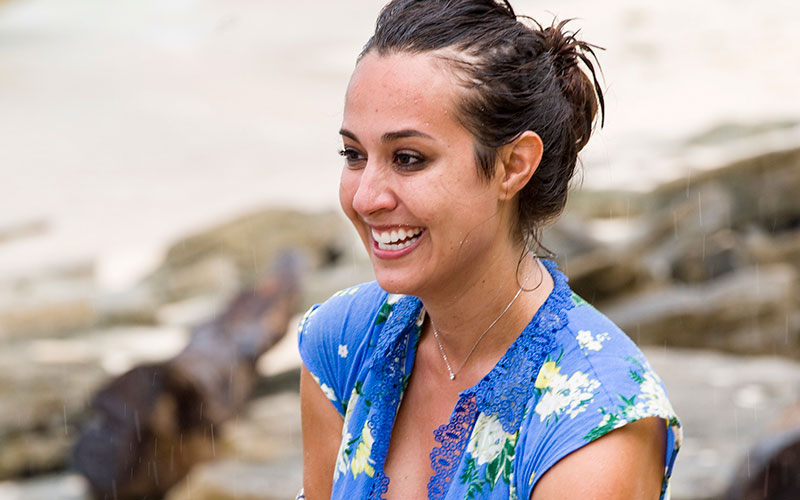 Angelina Keeley in the first episode of Survivor David vs. Goliath, "Appearances are Deceiving," when she first raised the disparity between the number of hidden immunity idols found by men and women. (Photo by David M. Russell/CBS Entertainment)

Survivor David vs. Goliath began with Angelina Keeley noting how few idols are found by women versus men. In the season finale, she found the seventh and final hidden immunity idol.

That was the only idol found by a female player during the entire season.

In the 37-season history of Survivor, there have been 98 hidden immunity idols, and women have found 17 of those. So why have men found 83 percent—more than four out of every five idols? Two Survivor experts have gathered data and presented in a series of articles published last week.

One of the many refreshing things about last season was how Survivor began, in small but meaningful ways, to wrestle with its sexism, starting with Angelina’s acknowledgement of the idol disparity, and ending with Gabby’s discussion at the Final Tribal council about how “women are treated differently in this game.”

Over the years, we’ve seen that manifest in different ways, from contestants behaving terribly to host and executive producer Jeff Probst explicitly dismissing women’s chances and then just ignoring those who do perform well during the reunion.

It’s been so prevalent that it became status quo—a product of choices the production makes (i.e. who Jeff Probst chooses to focus on during the reunions) and a product of our society and culture.

The number of hidden immunity idols found by men and women is a quantifiable, objective piece of information about Survivor’s sexism. But what causes it, exactly?

Sarah Channon of RobHasaWebsite and Jeff Pittman of True Dork Times teamed up to try to find out, writing companion pieces about hidden immunity idols and their discovery.

Jeff’s data analysis includes a document with every idol find ever, and the statistics above.

But he also breaks down things like at what point during the game idols were discovered, and “the discovery of second and third idols over the various phases of the game, relative to initial idol finds.”

When idols are played and then re-hidden, Jeff found that only “one of the 21 second or third idols found in a single season has been found by a woman: Kelley Wentworth’s second idol, found under the shelter on Day 28 of Cambodia.”

The data dismisses some theories, such as the age of players or the number of men and women on a tribe: “the gender ratios on tribes can’t be the (main) reason why men find more idols than women,” Jeff found.

What about the fact that women tend to be targets more often in early episodes?

Jeff’s data shows “that women, knowing they are likely early targets, tend not to engage in aggressive idol-finding during the pre-merge phase, then maybe start to look for idols later in the game.”

He also found “an increase in aggressive, extremely idol-focused male players” over the years.

So what about the players themselves? Sarah’s interviews with past contestants breaks down idol hunting into four different categories: time required, search methods, reasons to look for an idol, and reasons not to look. And then she examines gender issues in camp, with the production, and in the game play.

In her follow-up essay, Sarah offers a few key takeaways:

Sarah suggests that the production needs to do these two things:

“Hire more and diverse women, both in the field and in the editing suite. Consult them on how to characterize the female players.”

“(Re-)Introduce social twists and advantages in place of ones relating to votes and immunity. Communication going across tribe lines has almost always led to intrigue.”

And Jeff also points at Survivor’s past as holding some answers to dealing with this problem:

“Having more idols actually hidden in camp could be one way to reverse the current male-dominated trend. Returning to the old system of clues (or even idols) concealed within rewards is another. Simply varying the idol distribution method would also help. Just adding more variety would perhaps be the best approach. If the idols are always off in the jungle where women rarely feel allowed to venture, they’re almost always going to be found by men. Vary the locations, vary the way the idols are hidden, and we should see something closer to equitable idol finding.”

For all the details, data, and theories, please read Sarah and Jeff’s pieces, which are long and thoughtful and wrestle with these ideas and facts.

Here they are, in the order in which the were published: