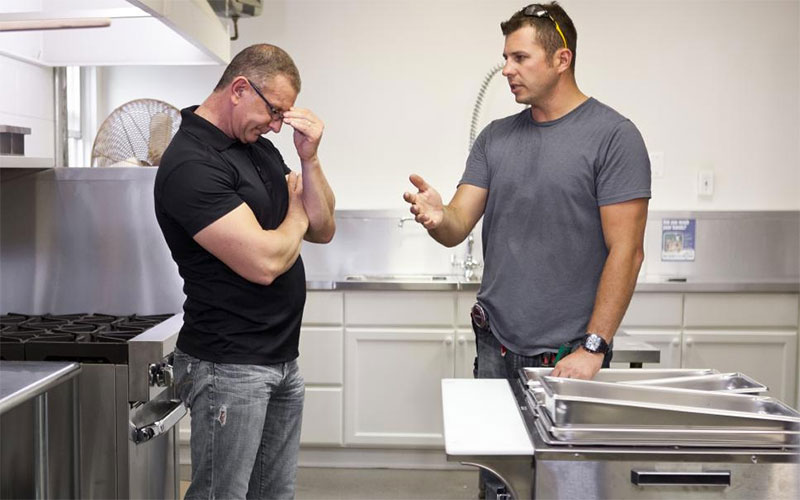 Robert Irvine and his long-suffering construction manager Tom Bury on an episode of Restaurant Impossible. (Photo by Emile Wamsteker/Food Network)

Food Network has yet to formally announce the show’s return, but it’s currently in production and season 14 will be airing later this year, according to its host.

Host Robert Irvine tweeted news of the show’s return about a month ago, with a link to a casting website that says production will be taking place in January, February, and March.

Latest: A review of the new Restaurant Impossible

Why now? Gordon Ramsay’s 24 Hours to Hell and Back did well last summer for Fox, which brought it back for a second season. It’s doing fine—though Fox’s The Masked Singer doubled Gordon Ramsay’s ratings last Wednesday—so maybe this is drafting off the renewed popularity of chefs shouting at people.

Irvine—who launched his own brand of protein bars in 2018 and is now creating his own line of cutlery and kitchenware—also just appeared as a judge this week on Guy’s Grocery Games.

During Restaurant Impossible’s 13 seasons, 100 of 140 restaurants rescued on the show eventually closed, with 37 still open under their original owners, according to a list compiled by Food Network Gossip.

The casting application for season 14 says restaurants must have between 50 and 250 seats, and asks for “photos of your restaurant, yourself, signature dishes,” plus an optional video.

The casting application also requires applicants to agree that they “shall not make any statements to the press or any media service or distribute, publish or circulate any written statement, release, promotional literature, news story, advertising, publicity or communications of any kind to any other party regarding the subject matter of ‘Restaurant Impossible’, its casting process, application process, programming services, operations and activities, or producers.”

Summers was on camera during several of Restaurant Impossible episodes, especially the later ambush episodes.

However, Summers is not involved in the return of Restaurant: Impossible.

Responding to a question from Food Network Gossip on Twitter, Marc wrote that he is “too busy” with “more episodes of [Double Dare]” and “a new show on another network.”

When Nickelodeon rebooted Double Dare last year, Marc returned in a new role, and clearly that’s continuing, along with other television projects.

Marc added that “most of” the rest of the original production team has returned, and revealed who’s now producing it:

“My dear friend BRIAN Lando is in charge. Most of team is back. I called Robert and wished him well. Hope everybody watches. First one is done and went great I hear”

Lando has served as executive producer on many Food Network shows, including the new Winner Cake All; all 20 seasons of Guy’s Grocery Games; and a recent show that I loved, Ultimate Thanksgiving Challenge.