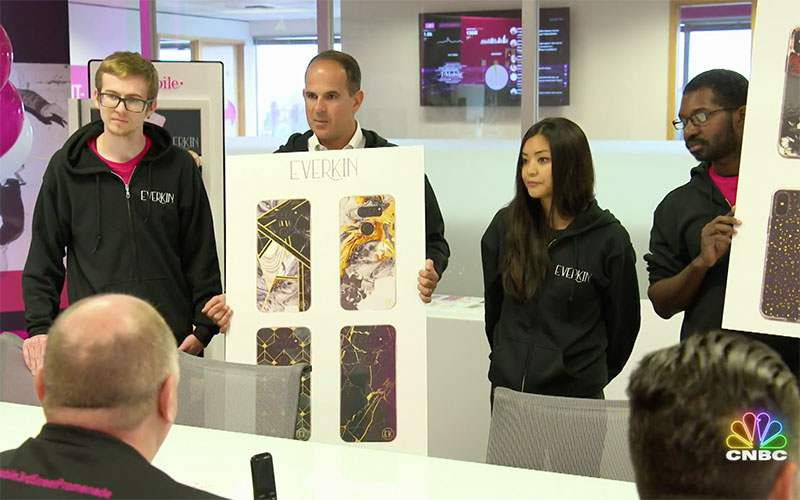 Marcus Lemonis assists Everkin employees during a presentation to T-Mobile on The Profit. (Image via CNBC)

It was a fascinating episode, full of ups and downs faced by a new company faced with a lot of pressure to perform and deliver rapidly. After that episode aired, Marcus Lemonis tweeted a question: “What other kind of startup would you like to see”?

There’s one answer that immediately came to my mind: others just like Everkin.

In other words, businesses we’ve already seen on The Profit.

I don’t think that’s what Marcus meant—I think he was looking for new businesses and existing start-ups—but I also think it’s time The Profit pivot and look inward.

In the five and a half years that the show has been on the air, Marcus Lemonis has pieced together a mini-empire from companies, brands, and businesses.

His web site lists 45 companies, and one of them, the Marcus Lemonis Fashion Group, contains 18 brands/companies under its umbrella (some of which overlap with the list of 45).

Not all of those were the subject of The Profit episodes or on-camera investments, but many were. And that’s a wealth of material.

The Profit should continue to become more transparent

We’ve seen other episodes that check back in with Marcus Lemonis’ companies. And familiar people have shown up, such as The Partner winner Juli Reed, or have been mentioned, including Courage B’s Stephanie Menkin, who’s now the president of Marcus Lemonis Fashion Group.

That’s mostly behind the scenes, though.

On screen, in its episodes, The Profit has freed itself from the formulaic rut that it slipped into a few seasons back, but it’s also engaging in more of the reality TV tropes that it tended to avoid in its early seasons.

There’s regularly obvious frankenbiting and dubbing, and editing that seems to force drama in the way The Profit used to resist. (And we can just forget about the episode with the people who’d previously been on another reality TV show that was all about obnoxious parents.)

The Profit also seems to increasingly rely on Marcus’ interview segments to frame the story. I’m glad to have his expertise and perspective about a company’s potential or its financials; I don’t always need his commentary to pile on more criticism and judgement of whatever we’re seeing (such as the Everkin staff trying to set up easels, which was embarrassing enough).

What attracted me to the show originally was its refreshing ability to not stick to the usual business makeover template: White guy comes in and looks around; white guy screams at people; people tell their sad stories, white guy cries and humanizes himself; white guy changes things around and a designer paints the walls; there’s a grand opening; the episode ends; droves of mindless viewers race online to harass the business owners for every perceived slight, even if those were created or enhanced by the production and editing.

Episodes that checked back in with businesses were early favorites of mine, and I think it’d be great for The Profit to do more of that. It could just be the inverse of what we have now: one or two new businesses, and the rest returning to people, products, and processes that we’ve seen before.

Show us their quest for profit: their struggles and their successes. And also, pull back the curtain.

My favorite episodes recently have been the reruns during which Marcus and executive producer Amber Mazzola offer commentary. They’re an amazing comic duo and hilarious to watch, which is entertainment enough, but their conversation often exposes the push and pull of production versus reality, and also reveals what happened behind the scenes.

The show could use additional transparency.

Last year, Inc. published an in-depth story about the “Dark Side to Marcus Lemonis’s Reality TV Show ‘The Profit.'” It detailed what it called Marcus’ “wielding of aggressive financial tactics” with some businesses, and others’ complaints about how they were portrayed.

As Inc. reported, after the Swanson’s Fish Market episode, “the family started getting death threats, obscene phone calls, and a flood of negative reviews online. Every time the episode ran, they’d get a new round of harassment from pro-Lemonis trolls.”

Of course, a show that deals with the complexities of businesses and people will have some disputes and disagreements, even ones that are litigated. But it shouldn’t exist to feed those insane trolls, nor should a reality show leave a trail of people and companies damaged by choices the production makes in its portrayal of real-life business transactions.

The Profit has done a lot of good—and helped generate a lot of profit—as it has produced some excellent television. Does it need a brand-new business every episode to do that?

I don’t think so. Like the Everkin episode, episodes can check in on when there’s something coming up, like a pitch or store opening. It can follow development of a product over time. It can show us the challenges and successes of running a business. It can show us how Marcus interacts with his employees.

It can also let those employees speak: Wouldn’t it be great to have heard from Everkin employees in interviews? The singular, one-perspective thing worked for a while, but it’s time to broaden the narrative and offer insight from everyone else we’re watching and getting to know. That takes more time and money, but it’d be worth it.

Other reality shows, from The Bachelor to The Challenge, bring back cast members season after season to continue following their stories. The Profit has done that, too, returning to characters and storylines we already know—with the added benefit of not being super-trashy. I’d love to see it do more.