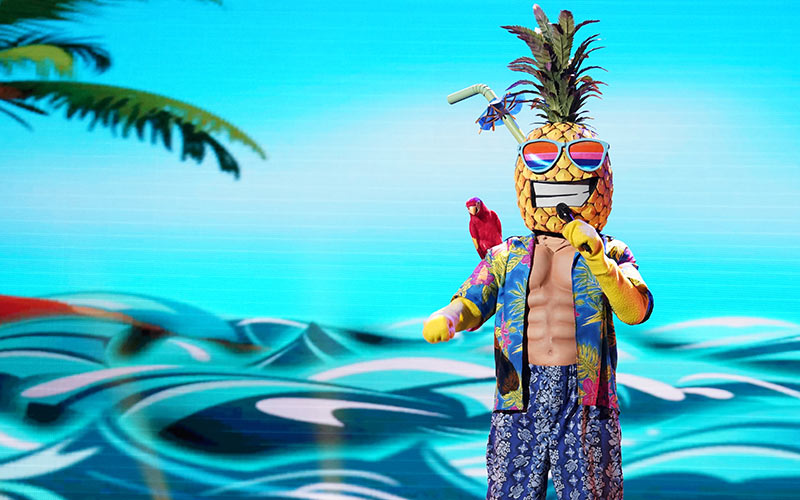 This is a photo of someone dressed up like a pineapple from Fox's The Masked Singer. Fox didn't have any images from its reboot of Paradise Hotel, but this seems like a good illustration for it. (Photo by Michael Becker/Fox)

Yet another big network series is being rebooted: Fox has announced that it’s bringing back Paradise Hotel, the early 2000s trashy-fun competition series in which couples pair off and participants who are voted out get replaced by new cast members.

The news comes one week before the return of Temptation Island on USA Network (the first two seasons aired on Fox) and with CBS importing Love Island sometime this year.

It will now be produced by SallyAnn Salsano and her 495 Productions, along with the original British production company, Mentorn.

Paradise Hotel season one aired in the summer of 2003; four years later, the Fox Reality Channel and MyNetworkTV brought it back, but season two lacked the fun of the first. (If you need an instant flashback, listen to the theme song, “Two Tickets to Paradise,” a cover of the Eddie Money song.)

The twist for season three—which does not yet have an airdate or even time of year—is that viewers will play a role via social media.

“Paradise Hotel follows a group of singles who are given the opportunity of a lifetime—to check in to an exclusive tropical resort—and check out with big money. Immersed in a gorgeous setting, these strangers will be surrounded by sun, fun and romance—all cloaked in a wild competition. This paradise won’t last forever … it will take strategy to remain there. Each week, these singles will vote off one of their fellow residents to make room for a new guest. In a new twist, viewers can play along at home, using social media to try and influence what happens on screen, including helping to decide who stays and who goes.

In her press release quote, Salsano describes the new twist as “viewers using their social media feedback to influence what happens on screen,” and calls that “a game-changer and will keep us all on edge.”

Fox’s reality TV executive, Rob Wade, goes further, calling Paradise Hotel “a show ahead of its time, and this incredible team of producers plan to take it to the next level. The format allows for a delicious mix of love, drama and humor with a uniquely FOX twist. By using fresh interactive elements, it enables fans to orchestrate the show’s narrative, making it can’t-miss television for a new generation of viewers.”

Since reality show producers and story editors currently orchestrate narratives in their editing and on-the-ground producing, it’d be fascinating to cede that control, though I cannot imagine how that’d work for a broadcast television show.

Giving viewers control over minor elements of the game on Big Brother rarely works beyond feeling like a way for producers to manipulate the game and blame viewers, while handing over a lot of control to the audience can be a disaster, as season one of Big Brother proved.

I’m really curious to see how this control manifests, or if it’ll just be lip service to get the show trending on social media.

The show is now casting contestants at ParadiseHotelCasting.com. Participants have to be at least 21.

Casting is being handled by Doron Ofir Casting, which also cast Jersey Shore, and the casting site says this:

This epic, all-in dating competition series requires you to use your every advantage to outlast your fellow singles in a game with a major prize and the very real possibility of finding the greatest prize of all, LOVE.

How will you play? Are you willing to seduce, charm, romance, manipulate or make alliances? Do you have the attributes and assets to win it all?

Set in a mysterious, exotic paradise, you and your competitors will live in the lap of luxury, with the goal to stay as long as possible.

If you’re ready to live the dream, find love, become a legend, and have the adventure of a lifetime, this is your one chance to do it all.