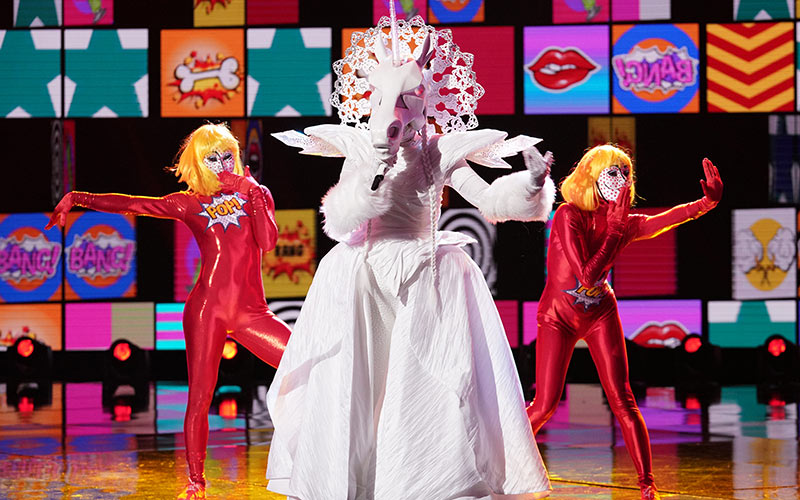 The Masked Singer has been a hit for Fox—and a rare new broadcast network reality show to actually be a hit—so the network today renewed it for a second season.

There were no details about season two, including when it might return.

It was also “FOX’s most-watched unscripted debut in 11 years, while its 3.6 million viewers across Hulu and FOX NOW mark the network’s most-streamed episode ever.”

What happened on episode 5

This section discusses the results of episode 5, which aired Jan. 30.

The press release didn’t say anything about whether judges Ken Jeong, Jenny McCarthy, Nicole Scherzinger, and Robin Thicke, or host Nick Cannon, would return. But I’d guess that’s likely, considering they’ve been part of the successful, even though they’re completely useless.

After completely failing to recognize his co-star Margaret Cho last week, Ken Jeong correctly guessed the identity of The Unicorn, who was unmasked as Tori Spelling. Bravo!

That said, the most frustrated I’ve been with the show was when it brought out physical objects as clues to each singer’s identity.

Specifically, for the Unicorn, there was a typewriter, which also had a label on it that said “typewriter.” I hope when the Rabbit is unmasked as Meghan Markle, she’s wearing a sign that says “Meghan Markle, Duchess Who Was on USA Network’s Suits.”

By the way, it turned out the typewriter actually once belonged to Tori’s dad, Aaron Spelling.

Including today’s episode, there are five episodes left; season one concludes Feb. 27.

While Fox didn’t offer any insight into what season two will be or when it will air, Fox reality TV executive Rob Wade did say this in the press release:

“The response to The Masked Singer has been fantastic and we are thrilled to bring it back for another season. I am so happy to see a singing Peacock burst into pop culture! The Masked Singer is unique, bold, original and embraces the DNA of all the best FOX unscripted shows. We look forward to Season Two being even more fun, weird and wonderful than the first.”

More fun and weirdness would be great, because that’s one of the strengths of the show.

If the network is looking to change things for season two, I have five suggestions for The Masked Singer—some of which involve it being more like the original South Korean format.