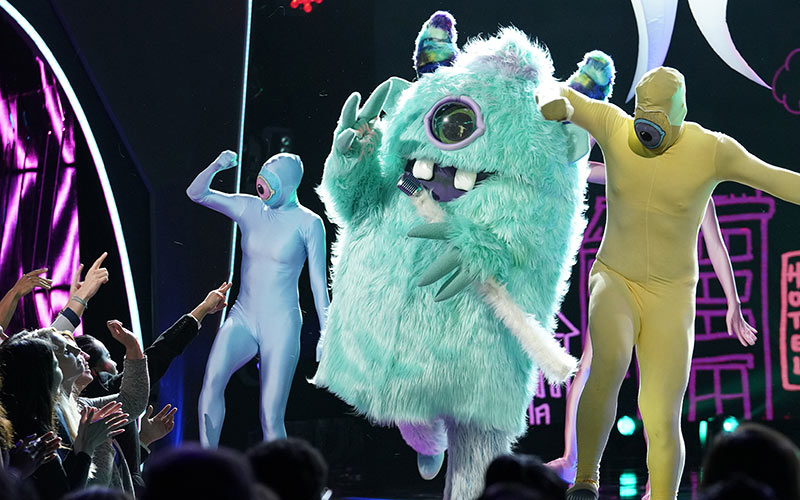 A celebrity is inside this costumed character, known as Monster on Fox's singing competition reality show, The Masked Singer. (Photo by Michael Becker/FOX)

On tonight’s premiere of The Masked Singer—Fox’s new singing competition that has celebrities performing from behind elaborate costumes—the singing was mostly atrocious, and the judging unspeakably useless.

But I am hooked, because I want to know who the people are behind the masks. (This story discusses the identity of the first unmasked celebrity.)

Almost immediately after the show premiere on the east coast, it was trending #1 on Twitter in the United States, and the hashtag was full of guesses.

Social media reaction is not a good predictor of, nor correlated to, actual television ratings, but I think Fox will have a decent hit on their hands—or at least, decent premiere ratings.

That’s because The Masked Singer creates an instantly compelling mystery, and that’s the genius of this format (which already succeeded in South Korea, so Fox imported a proven hit).

It’s an excellent way of engaging viewers without pandering to them. (“America” has voted…)

The singing celebrities are even given one-word descriptions to match their fabulously bonkers, incredibly detailed costumes: The Hippo, The Unicorn, The Lion, The Peacock. (A few of the costumes may be nightmarish, but they’re wonderfully detailed creations, and just ridiculous to watch as they’re performing.)

The show opened with The Who’s “Who Are You,” which was used as the theme song for CBS’ hit procedural CSI, and the connection makes sense: it’s a formulaic show that provides a puzzle and then solves it less than an hour later.

I was immediately ready to know. My enthusiasm was dampened slightly after the first reveal, because my initial response was: Who?

That’s entirely on me, though, because of my lack of knowledge about sports and the NFL.

Also, I was at least expecting someone really famous, like a star who’d appeared on Worst Cooks in America: Celebrity Edition, not something like Dancing with the Stars (Antonio Brown placed fourth on season 22).

He’s a big enough name and star that the show has delivered on its promise, though as NPR’s Linda Holmes pointed out, there’s a risk “with only one reveal per week. If that person means nothing to you, the episode kind of feels like a bust.”

A mystery, but a mess of a show

The editing on the reveal, however, was a dizzying mess—kind of like the rest of the show.

The journey to discovering who’s behind the mask was far less-interesting than the mystery.

The judges—Ken Jeong, Jenny McCarthy, Nicole Scherzinger, and Robin Thicke—and their judging made about as much sense as someone running to catch a bus while on a treadmill.

Imagine giving someone a puzzle as a present. Now imagine the recipient taking the wrapped box and shaking it, and then trying to guess what’s on the puzzle itself.

A dog! The Eiffel Tower! An amoeba! A salt shaker! My patience for this part of The Masked Singer!

That’s what the judging was like. These asinine guesses do have the effect of elevating the show, or at least our perception of it: Even if it’s not Lady Gaga, maybe it’s another A-list singer (probably not).

The judges are placed high above the action, and have binoculars so they can see, which is definitely an upgrade over the hand binoculars that America’s Got Talent forces Heidi Klum to use.

They also chime in during the clip package, when the celebrity—still in full costume, but with a disguised voice—introduces themselves. There are clues, in the dialogue and in the visuals, and those were a step above the alleged clues on The Mole, but also not very helpful.

But that didn’t stop the judges from trying, if just shouting things means trying.

At least the hour moved quickly: six performances, with one winner and one loser determined by studio audience vote, followed by the judges picking a loser from the three. Nick Cannon hosted with a very light touch.

It was quick and simple, though somehow still too long. Perhaps that’s because the show itself feels like a late-night talk show bit that’s been expanded into an hour and multiple episodes for no reason.

Yet I cannot wait to see who the others are.

Barack Obama? Theresa May? Mister Rogers? Voyager, having returned from outer space just to appear on The Masked Singer?

Since their singing really wasn’t worth much at all, though, after we meet the other six costumed celebrities, I may just DVR and fast-forward to the end.